STAR SHIELD is a useful handicapper on turf and took well to Newcastle on his all-weather debut in November. He was coming with a real rattle over this distance when meeting traffic problems. He pulled out wide before finishing well less than a length behind the winner. He goes off the same mark here so won’t be far away. 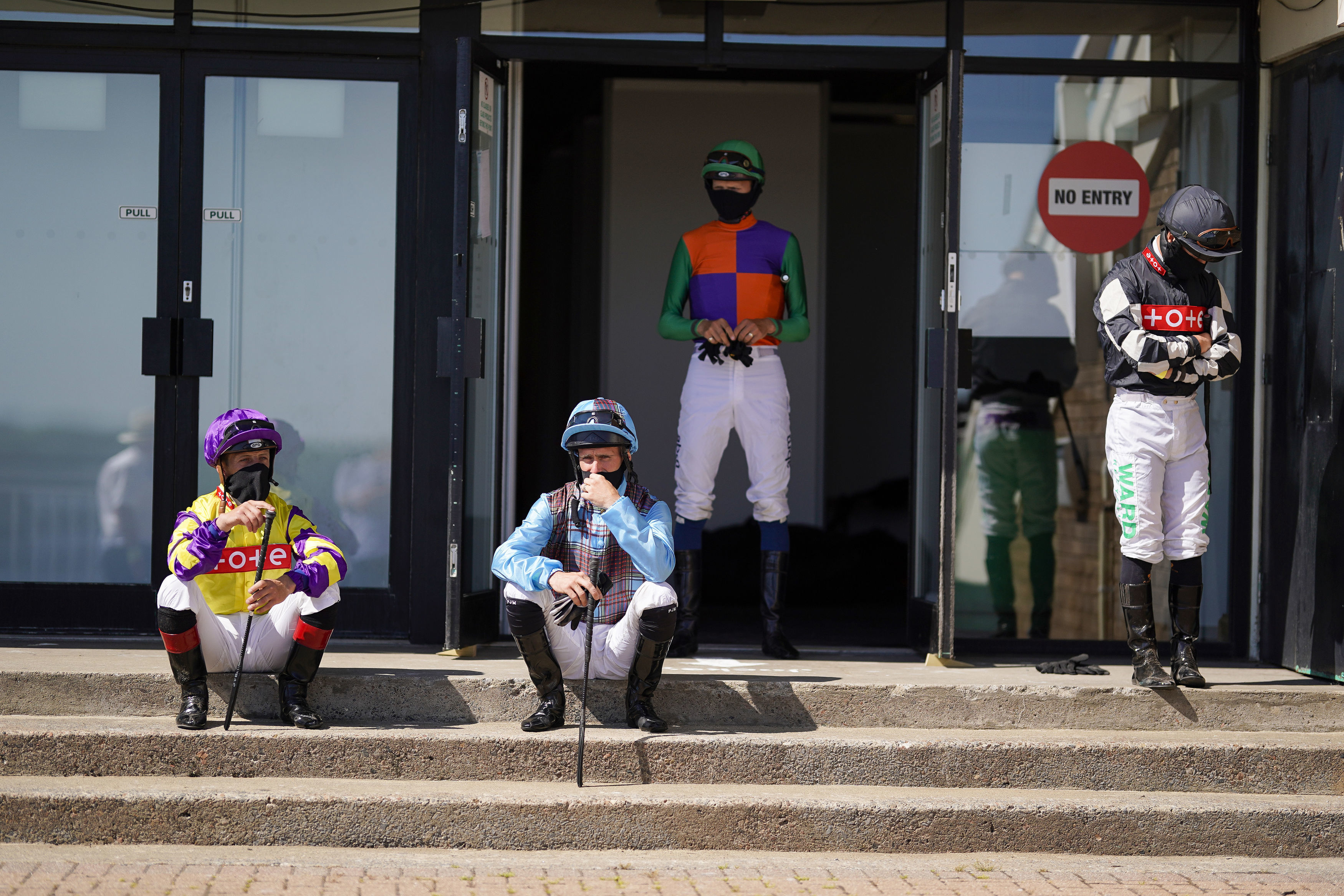 Siglo Six hit the frame in a better race than this at Sandown in August and didn’t get home over further at Wolverhampton to end the season. He’s had a little nudge down the weights and looks a big threat.

Tough Remedy was a close third at Kempton in February and likes this trip. Megan Nicholls takes a valuable 3lb off in this tight contest.

Amplification ran on into second over 7f here in February and will like this trip, while Jackstar is another who looks on a fair mark.

SANDRET progressed right through last season with an impressive win at Doncaster before a solid finish at Wolverhampton when a close-up fourth against useful rivals. He was a winner on his sole visit to Newcastle so we know the track suits and there should be plenty of pace on here, which he likes.

Dark Vision should find this a lot easier than the Balmoral Handicap at Ascot he was midfield in last time. He earlier went well at York and was sixth in the Cambridgeshire so has quality. He’s coming down the weights and Silvestre De Sousa has a good record when riding for Mark Johnston.

Fifth Position has been placed at Listed level and looks the type to improve as a four-year-old.

Irreverent clocked a personal best when a close fourth in a good race at Ayr last time in September and this trip is ideal.

CANAGAT looked a nice prospect on both runs as a two-year-old with a close third on debut at Chelmsford before a comfortable success at Kempton in November. They were both over this 7f trip and he starts off handicapping from what could prove to be a lenient mark.

Jean Baptiste is sent north by Sir Michael Stoute after two close seconds at Kempton. He can take a big step forward today, as can Pontefract winner Custodian. It was soft ground when Overwrite scored over this trip at Brighton but he did it by an impressive six lengths and is another with much more to come.

Ayr Harbour was too bad to be true at Kempton in March after landing good wins here and at Lingfield. He drops to his ideal distance and is a fair 5lb higher than his last success.

Amazing News won at Wolverhampton before disappointing on his third run. He starts handicapping now and looks capable of better.

MUBAKKER has landed both his wins on the all-weather at Wolverhampton and Kempton when this trip suits ideally. He came back from almost a year off to land the second of those successes so clearly goes well fresh. He didn’t fire in tacky ground on turf at Ascot in October but looks on a lenient mark and there’s more to come after just four outings.

Glen Shiel ran fairly from a poor draw in a Listed contest at Wolverhampton in March after too good spins around here. Dropping back to 6f may not be ideal but he has plenty of quality.

Camacho Chief went close in a big-field Ascot handicap over the minimum and goes off the same mark today. He’s a big danger if getting home.

Admiralty has held his own in some good handicaps on turf and went close at Leopardstown off this mark two starts ago. He has place claims.

T&Cs: New customers only. Place your FIRST bet on any sportsbook market and if it loses we will refund your stake in CASH. Max refund for this offer is £20. Only deposits made using Cards or Apple Pay will qualify for this promotion. T&Cs apply. Paddy's Rewards Club: Get a £10 free bet when you place 5x bets of £10+.

SIGNIFICANTLY gets the nod in the absence of any form clues. He’s from a family that has produced winning sprinters and trainer Karl Burke knows how to get one ready at home.

Lockdown would be a topical winner and he’s nicely bred with plenty of pace in his pedigree. Hugo Palmer gets more debut winners than most handlers.

Strike Red’s sire Dark Angel produces lots of winners over this course and distance so he’s another to watch.

Mutazawwed comes from Mark Johnston and looks as though further will suit on pedigree. As ever in races like this, have a close look at the betting market.

VICTORY HEIGHTS comes from a trainer and jockey team in James Tate and PJ McDonald that win with almost 40% of their runners at Newcastle. He comes from a family that features plenty of sprint winners and he’ll know his job on debut.

Kevin Ryan is another who has plenty of success and the track and his newcomer Digital is related to winning juvenile sprinters.

Emirati Dirham has lots of winning sprinters in his pedigree and is worth a market check.

Pacha Prince is another who should have plenty of pace.

VIRGINIA PLANE is bred to be a sprinter and is half-sister to Liberty Beach who won four times for trainer John Quinn last season, including on debut. She should be wound up enough to do herself justice first time out.

Electric Blue is bred to need a mile in time but comes from James Tate who is always respected with his newcomers.

Imperial Butterfly should have plenty of pace as a juvenile and is worth a look in the market along with Aish who should know her job coming from Kevin Ryan.

PELEKAI could be the answer to another tricky maiden with no form to consider. She is related to winning two-year-old sprinters and trainer Mark Johnston is more than capable getting one ready for debut.

Similar comments apply to Desert Vision who should have enough zip as a youngster for the minimum trip.

Spirit Of Sisra is trained by Tom Dascombe and is related to lots of winning juveniles so is one to watch in the betting.

SEXY BEAST has had an interrupted career but came back from a long break to finish a good second here in February. He has plenty of stamina for this trip and he’s just 3lb higher than when winning a decent contest at Haydock four starts ago. A repeat of that would see him go very close.

Unit Of Assessment has winning form on this tapeta surface and has dropped down the weights to just above his last success which came at Goodwood last summer. He relishes this trip and should be in the mix.

Mountain Ruler is interesting on just his third start for Mark Johnston. He improved for being upped to this trip when a close second at Southwell latest. He makes his handicap debut from what could be a lenient mark.

Blue Medici will enjoy dropping back to this distance after a fair effort at Wolverhampton in March.

T&Cs: New customers only. Place your FIRST bet on any sportsbook market and if it loses we will refund your stake in CASH. Max refund for this offer is £20. Only deposits made using Cards or Apple Pay will qualify for this promotion. T&Cs apply. Paddy's Rewards Club: Get a £10 free bet when you place 5x bets of £10+.

MEDAL WINNER makes his handicap debut from what looks a more than fair mark after landing a cosy win at Brighton when last seen in July. That built on a good second at Redcar when this trip suited well. He should have a lot more to offer on this fourth run.

Sucellus has moved from John Gosden to Roger Fell on the back of a short-head win at Sandown in September. That was over this distance and he showed his liking for this tapeta track when winning at Wolverhampton five runs ago. He’s up 3lb for that success which gives him every chance.

Moll Davis has shot up the weights but was third at Listed level last autumn so warrants respect.

Trivithick won well here last time over a mile but has stamina to prove.

Jus Pires can’t be dismissed after a comfortable success over course and distance last time out in February. The handicapper has been fair and he deserves this step up in grade.