The 51 million times Sydneysiders didn’t tap on in March

Sydney’s public transport patronage has fallen by about three-quarters amid the coronavirus pandemic, with the fewest number of people using the network in almost a century.

About 51 million fewer trips were taken on Sydney's rail, bus and ferry network last month compared to March 2019, as cities across Australia shut down and unemployment rose.

The last time so few people were travelling on the city’s rail network was the 1920s, said University of Technology Sydney transport expert Mathew Hounsell.

“Transport is a derived need. Road and rail usage drop dramatically during recessions,” he said.

Despite the unprecedented fall, Transport for NSW is continuing to run services at the normal rate to ensure those still using the system are adequately spaced in an effort to avoid COVID-19 transmission.

Transport for NSW secretary Rod Staples, whose department confirmed a 75-80 per cent decline, said the government had been expecting the massive drop. 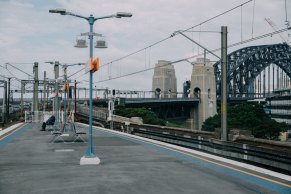 Patronage on Sydney’s public transport network has dropped by about 75 per cent amid the coronavirus pandemic.Credit:Roger Stonehouse

“It is something we have been planning for. It has been great to see the public taking a common sense approach and only using the network for essential travel,” Mr Staples said.

“Transport for NSW remains committed to providing a safe service that essential travellers can rely on in the coming weeks and months, and we are not making any moves to reduce these services at this time.”

On the train network, a 75 per cent fall means that 27 million fewer trips were taken last month, with a total of 9 million train trips across the state, compared to 37 million trips in March last year. 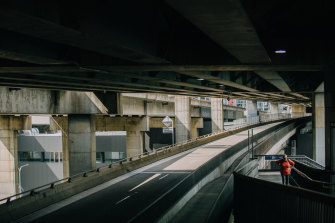 Road traffic has fallen by 30 per cent over the past four weeks.Credit:Roger Stonehouse

About 22 million fewer bus trips would have been taken in March.

This is the equivalent of about half a million trips being taken across the network every day, compared to a daily average of two million in recent years.

University of Sydney senior lecturer in transport and logistics Geoffrey Clifton said while a decline was expected, the speed at which it occurred was shocking.

“We would have to go back to the coal strike in 1949 or the pilots' dispute in 1989 for anything comparable,” he said of its speed.

Mr Clifton said while it was important to keep the network operating, cutting back some peak hour services may help the service in the long-run.

Meanwhile, the state government also confirmed a 30 per cent decline in road use over the past month.

Mr Staples said roadworks would be fast tracked across the city, including the closure of the M5 East Motorway between Beverly Hills and Arncliffe.