The best holiday homes to book for a post-lockdown break

Let’s get together: Family and friends will want to meet again post-lockdown – so book a bigger holiday home and live a little

The right to roam is sorely missed. Travel has had to be put on hold. But nothing has been harder to live without than our nearest and dearest.

We’ve phoned, Skyped, FaceTimed and Zoomed — yet all of us are dreaming of days beyond the lockdown, when grandparents can see their grandchildren and families can enjoy real, not virtual, time together.

Here are some of the best options in the UK and abroad where you can do just that once restrictions are lifted. 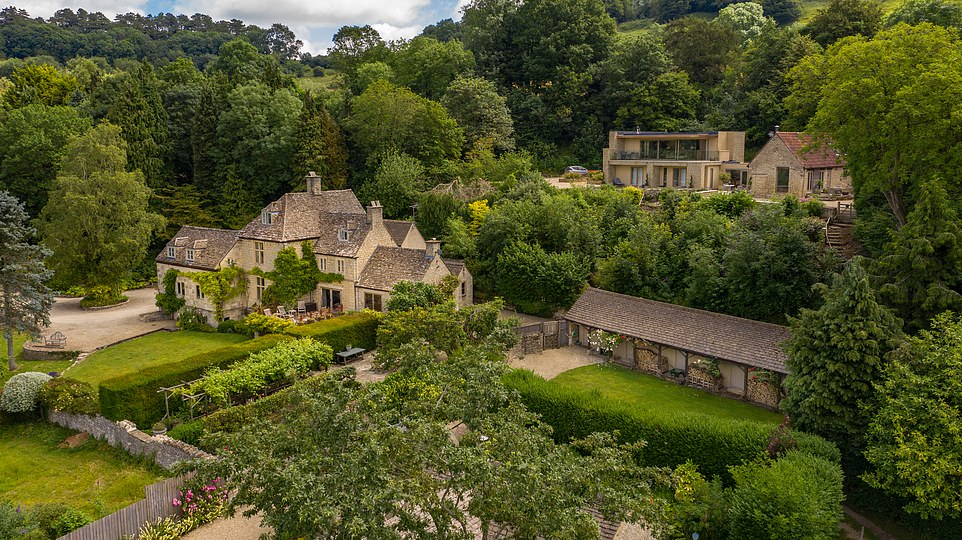 Dryhill House is built on the site of an ancient Roman villa near Cheltenham in Gloucestershire. It sleeps up to 10 people

Dryhill House, near Cheltenham in Gloucestershire is a 400-year-old, dog-friendly home built on the site of an ancient Roman villa.

If that isn’t exciting enough for budding adventurers, head to the wooded glade with two spring-fed lakes where you can take a dip in the larger of the two. Then enjoy a lakeside barbecue next to the safari‑style tent.

The spacious house sleeps ten, and its mature gardens, brimming with roses and clematis, are perfect for sunny days. There’s a lovely outdoor hot tub, too.

Day Trip: A 40-minute drive will take you to Cotswold Wildlife Park and Gardens (which has more than 260 species of animals), ancient Gloucester Cathedral (used in two of the Harry Potter films) or to the treetop walkway at Westonbirt National Arboretum. 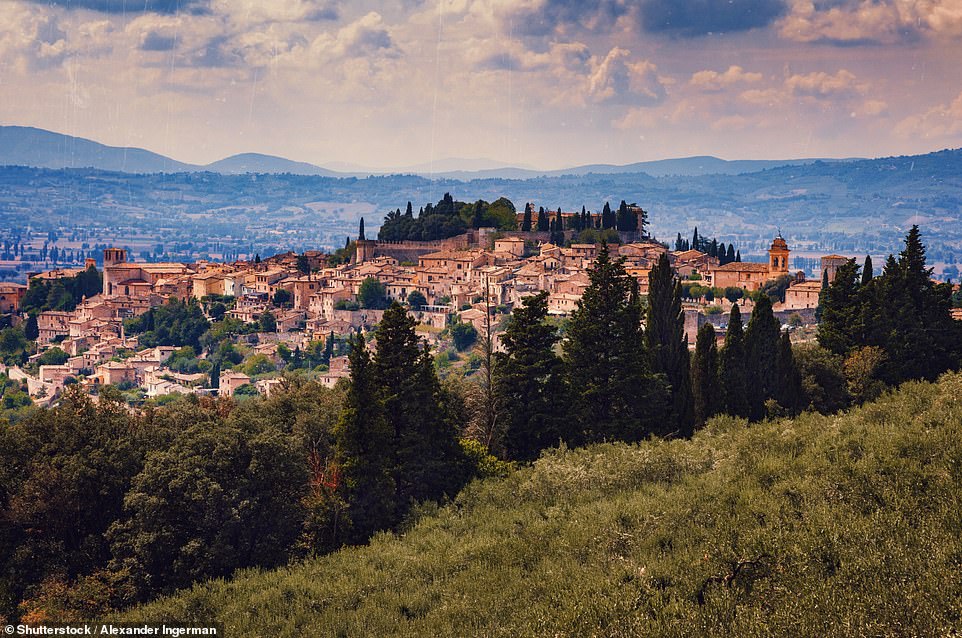 Casa Giardino is on the unspoilt, ancient hill town of Spello, pictured, which is deep in the Umbrian countryside

The unspoilt, ancient hill town of Spello, deep in the Umbrian countryside in central Italy, is the setting for Casa Giardino, a splendid 14th-century villa.

Behind the stone walls and green shutters, three bedrooms and an open kitchen come in bold colours with exposed stonework and wooden beams. The garden has a small pool and brims with wild roses and lemon trees.

This is the perfect spot for an evening aperitivo, while the youngsters walk through the town to buy gelati.

Day Trip: The historic town of Assisi, birthplace of St Francis, is close. Its 13th-century basilica has frescoes by Giotto, Cimabue and Simone Martini. 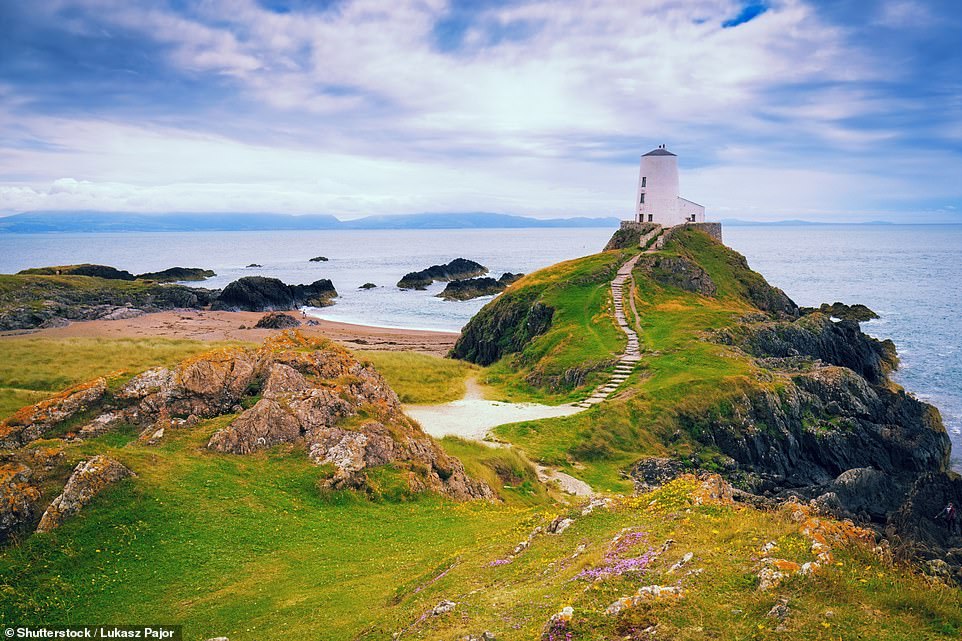 The Welsh island of Anglesey, where the family hideaway of Seagulls is located. It is a modern house built into rocks on the water’s edge

Those who yearn for the smell of the sea couldn’t ask for a better family hideaway than Seagulls on the Welsh island of Anglesey.

The modern house is built into rocks on the water’s edge and overlooks the Menai Strait and has magnificent views of the mountains of Snowdonia.

Four-bedroomed Seagulls is ideal for active youngsters. Lovely beaches such as Llanddona are on your doorstep. A few miles away, Zip World and the Beach Indoor Climbing Centre provide entertainment for rainy days.

Day Trip: Newborough Warren Nature Reserve, where you will see Welsh mountain ponies, red squirrels, cormorants and may even hear skylarks, is 20 minutes away. 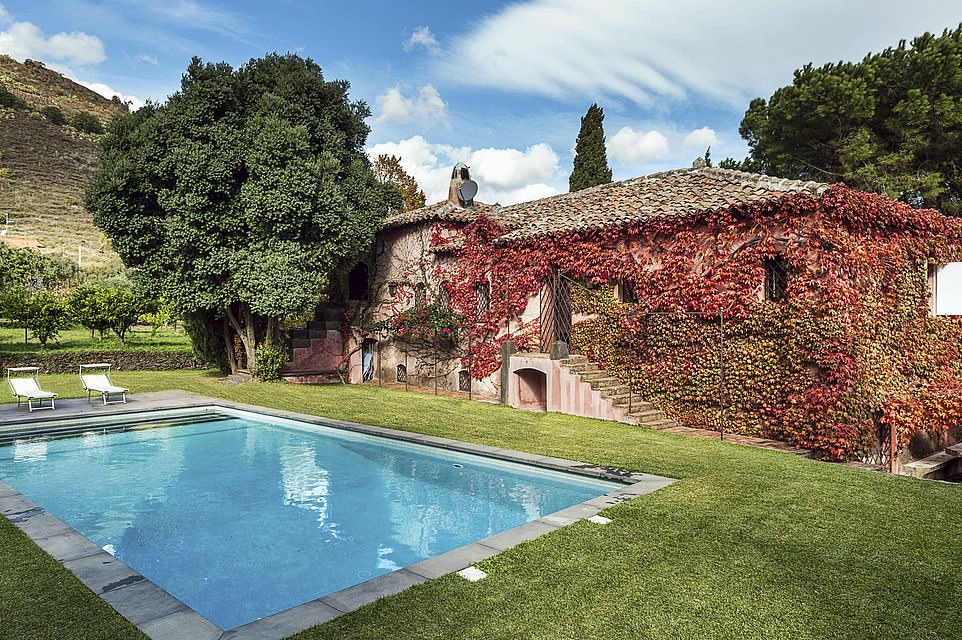 Villa Giacomo, which lies in the shadow of Mount Etna on Sicily. It is just 30 minutes from the beach

In the shadow of Mount Etna, the beautiful virginia creeper-clad Villa Giacomo brims with Sicilian charm.

Antiques and hand-painted tiles provide elegance and a sense of tradition throughout this spacious six-bedroom house.

#The beach is just 30 minutes away but it may be hard to tear yourself away from the lush gardens, fine pool and terrace with a pergola.

Day Trip: Don’t miss the impressively preserved Greek theatre in Taormina, which dates back to the 3rd century BC. 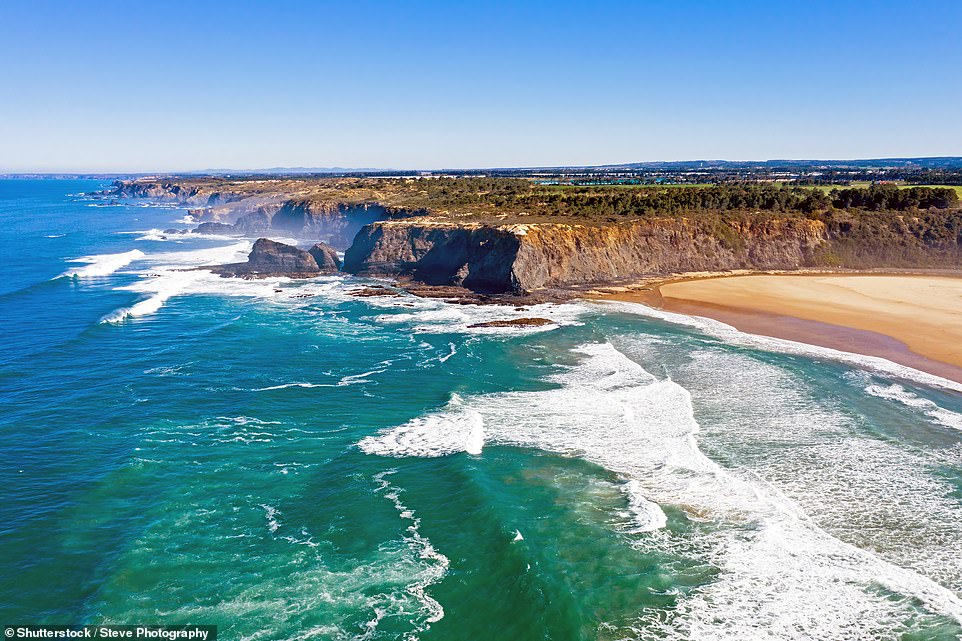 The beach of Odeceixe, which has been voted one of Portugal’s seven wonders. It is close to Casa Gea in the Algarve

Casa Gea in the Algarve, southern Portugal has traditional tiles on the floors and on bathroom walls.

However, the overall look is modern and swish; it’s had a refurb recently.

A pool in front of the house allows parents and grandparents to enjoy wine in the shade while watching the children.

Inside, there are three bedrooms and a large open-plan sitting room.

Casa Gea is a short drive from Zoomarine, with its water parks and resident dolphins.

Day Trip: Pack a picnic and head across to the unspoilt west coast and the beach of Odeceixe, voted one of Portugal’s seven wonders. 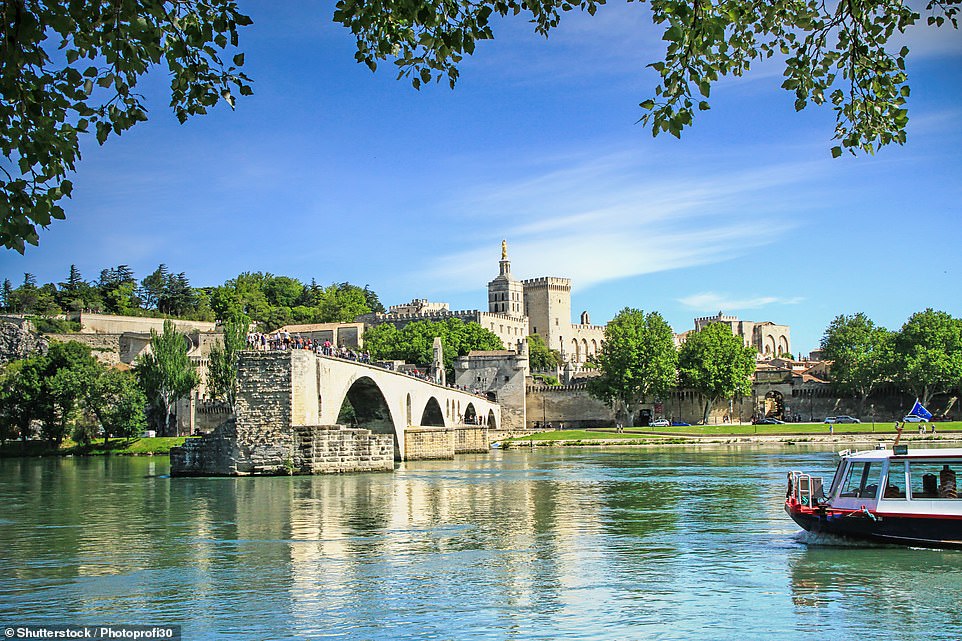 The green-shuttered Villa des Alpilles is half an hour away from Avignon, pictured, famous for its bridge

One for art lovers, the green-shuttered Villa des Alpilles has simple, modern interiors, a large sunny terrace, an outside dining area and private pool.

It sits on the edge of historic Saint-Remy-de-Provence, where Vincent Van Gogh painted more than 150 scenes of the surrounding landscape.

Day Trip: Half an hour away is Avignon, famous for its bridge and the Palace of the Popes.

Book it: Seven nights, sleeping six (no children under five), from £1,363 (jamesvillas.co.uk). 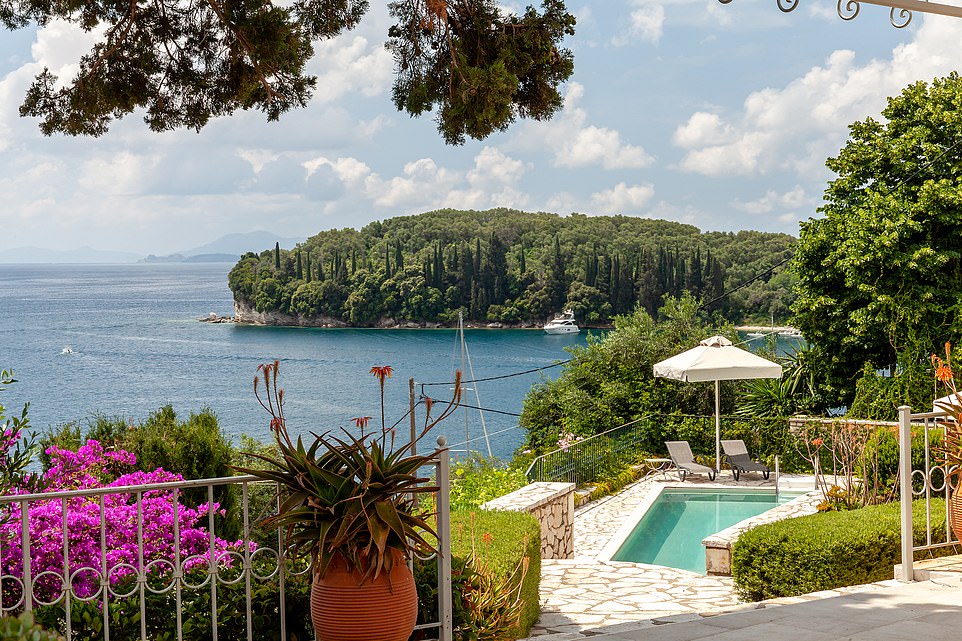 Group travel: Try the view from Villa Almyra at Kalami on the Greek island of Corfu. The area featured in the 1981 Bond film For Your Eyes Only

Hunker down with your family in Villa Almyra, an impressive house perched above the postcard-pretty bay of Kalami, Corfu.

The bougainvillea-clad pergola offers shade for outdoor dining with sea views, while the garden has a pool and a gated path down to your own private pebble beach.

Nearby stands the White House, once home to writer Lawrence Durrell (elder brother of Gerald, who wrote My Family And Other Animals about their time living on Corfu). The area also featured in the 1981 Bond film For Your Eyes Only.

Day Trip: A 45-minute drive will take you to the 15th-century Old Fortress of Corfu, which is one of the most impressive fortifications in all of Europe. 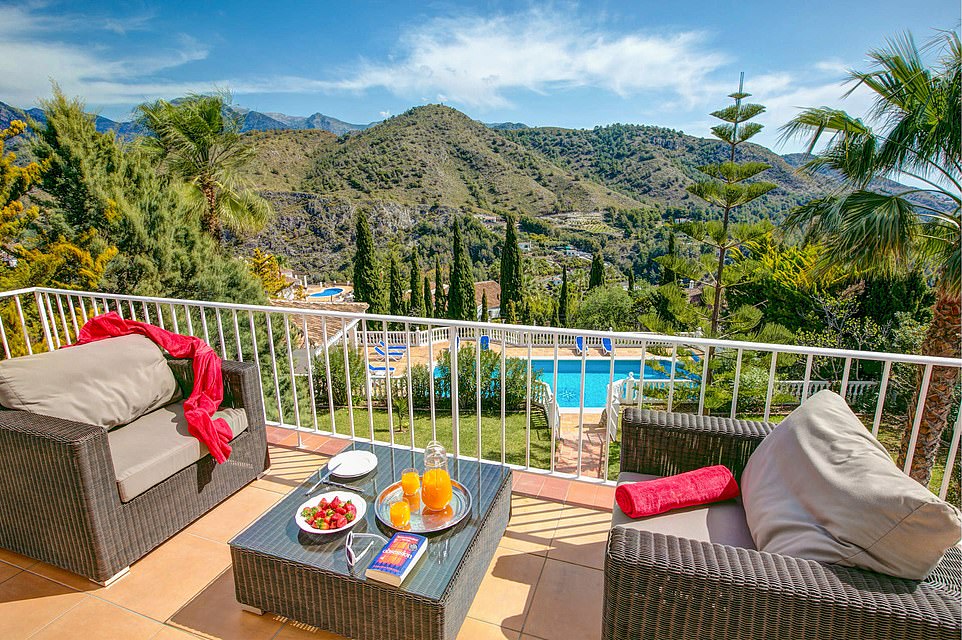 Villa Las Mariquitas in Andalucia, southern Spain, can sleep up to six in the main house. There’s space for two more in a separate studio and a further four in an annexe

Multi-generational holidays usually work best with abundant space, and Villa Las Mariquitas in Andalucia, southern Spain, has a lot of it.

Six can sleep in the main house, while there’s room for two more in a separate studio, and a further four in an annexe.

There’s also a large pool with a sun terrace. Frigiliana, one of the region’s ‘white villages’ with cobbled streets and tavernas, is a five-minute drive away. Beaches and the sea are close by.

Day Trip: Just over an hour away by car is the ancient city of Granada, and the Alhambra palace. 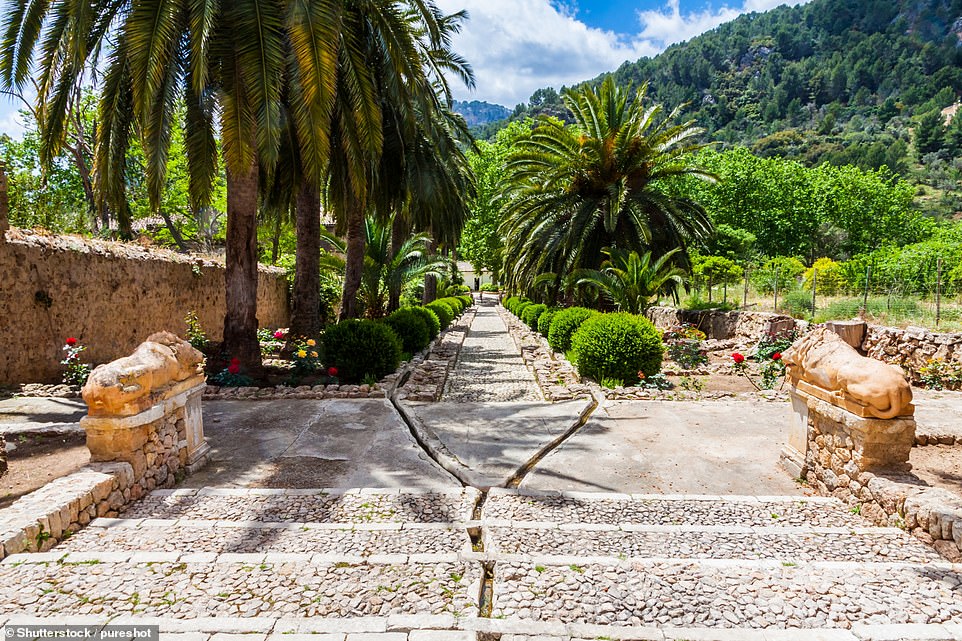 The Jardines de Alfabia, pictured, is a 40-minute drive away from Placa Major in the ancient town of Pollenca

The Placa Major in the ancient town of Pollenca in Mallorca holds a lively and popular Sunday market.

It’s a pleasant half-hour stroll from there to the pretty, honey-coloured stone villa of Ca’n Flora. Inside are three tastefully decorated bedrooms. Outside is a pool, plus a lawn with swings and table tennis in the shade.

The proximity to the town and beach, a ten-minute walk away, makes Ca’n Flora ideal for any older teenagers.

Day Trip: The lovely Jardines de Alfabia, with its water lilies and endless water fountains, is a 40-minute drive away. 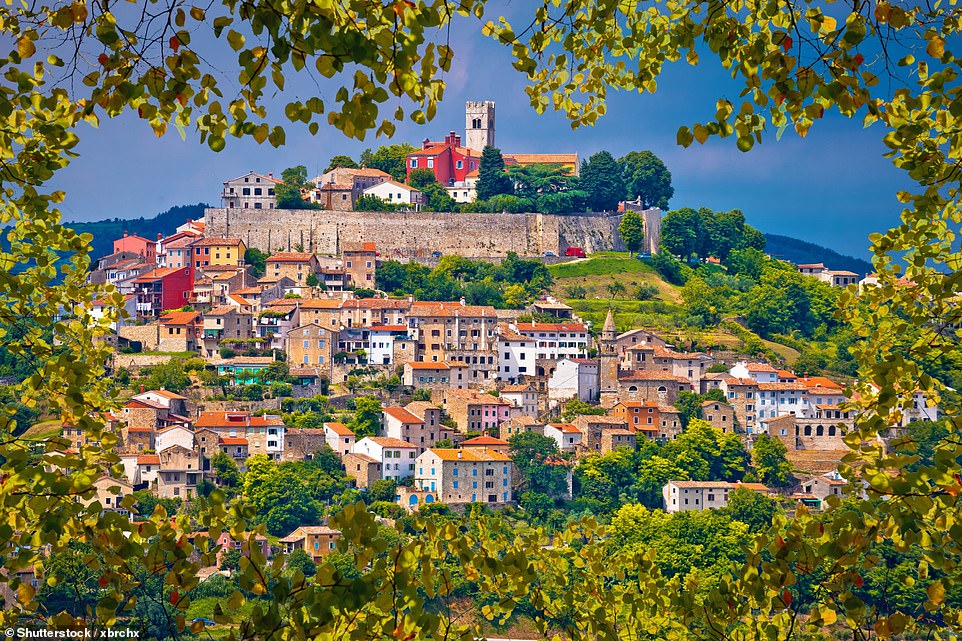 Motovun, one of Istria’s most celebrated hilltop towns. It is an hour from Pula and also close to Porec

Just outside Motovun, one of Istria’s most celebrated hilltop towns lies Scarlett, a charming villa built from local Istrian stone with views over vineyards and truffle-rich, forested slopes to the medieval citadel itself.

The house, with multiple French windows lets the outside in, while the outside has a pool, built-in barbecue and table tennis to keep everyone occupied.

Day Trip: An hour away lies Pula, and its Roman amphitheatre. Closer to home is Porec, where, housed in the early Byzantine Euphrasian Basilica, are 6th-century mosaics. 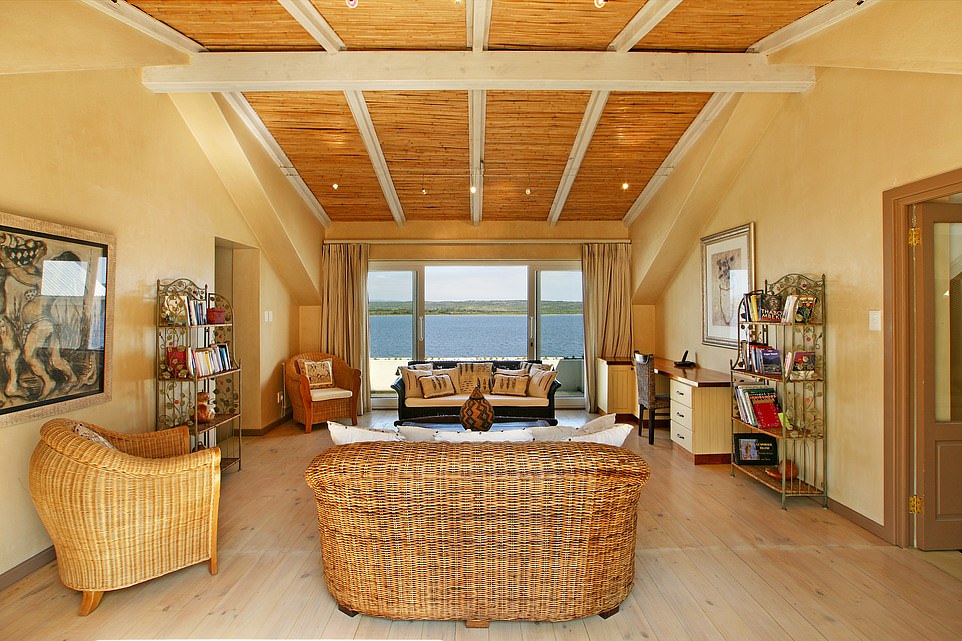 The Water House, pictured, sits above a lagoon just outside of Hermanus, a short drive south-east of Cape Town

Just outside Hermanus, a short drive south-east of Cape Town, Water House sits above a lagoon. It’s reached through beautiful fynbos-filled gardens and comes with five spacious bedrooms with either views of the lagoon or the mountains behind.

There are eating areas inside and out, and a braai (barbecue) for cooking up a storm.

A natural paradise for children and adults alike.

Day Trip: Drive along the nearby Hermanus Wine Route R320, where lesser known but excellent wineries flank the road.