The harsh realities of birth in the times of corona

Birth in the times of corona: Medics in hazmat suits, dads told to wait in the car park and no cuddles from grandparents – after Carrie’s new arrival, the harsh realities of having a baby during a pandemic

With no visitors, fears about picking up Covid-19 and midwives swathed in PPE, as Boris Johnson’s partner Carrie Symonds will have discovered, giving birth during a pandemic is certainly a unforgettable experience — if not for the right reasons. Here, six mothers share their very different stories of having corona babies . . .

My parents have missed out on precious moments

Eleanor Mason, 34, gave birth to a baby girl, still unnamed, on Sunday, weighing 9lb 12oz. She owns a rainwater harvesting company and lives in Newark, Nottinghamshire, with her husband and their older daughter, two. She says:

If I could have one wish granted right now, it would be for my parents and in-laws to have those precious first cuddles with their new granddaughter.

By the time they get to do that she’ll have changed so much. Of course, they’ve seen her over video calls, but it’s not the same. And it will be a long time before I’ll be able to socialise with other new mums at things like baby classes, which were such a support when I had my older daughter. 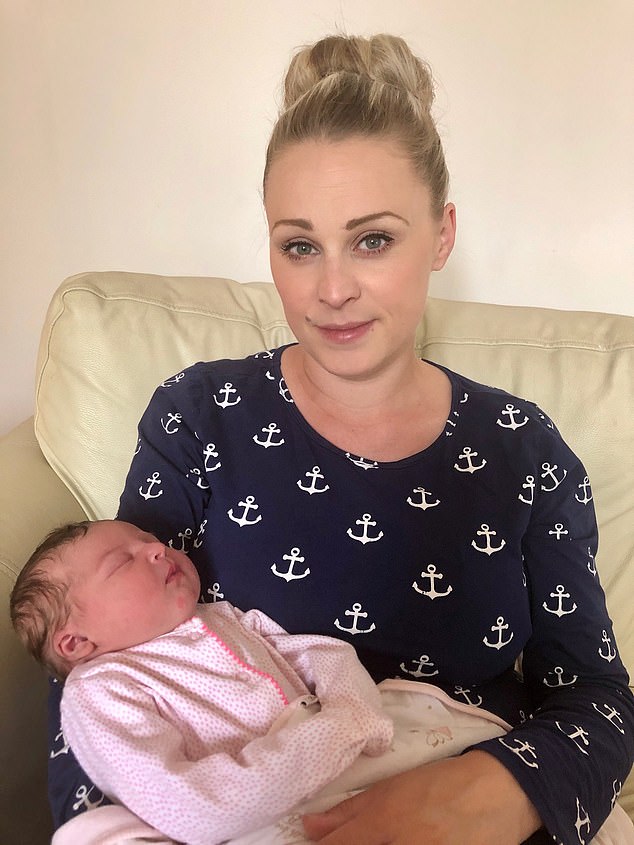 British mothers who’ve given birth during the covid-19 pandemic, shared their experiences. Pictured: Eleanor Mason, 34, from Newark, Nottinghamshire, who gave birth on Sunday

Pre-coronavirus, my husband and I had hoped to have a calm water birth in hospital to match our first birth experience. When a pandemic was declared, our first choice became a home water birth. We were told it would be possible, but only if there were enough midwives working.

Although the birthing pool arrived at our house, last week we were told a home birth wouldn’t be possible due to a shortage of midwives and reduced ambulance service if I needed to be rushed to hospital.

I went into labour naturally last weekend, one week overdue, and when we arrived at hospital in Lincoln I was taken to a non-labour ward to have a test because a scan a few days earlier had shown that my baby was large.

My husband wasn’t allowed in with me, which was scary because I was having quite strong contractions, but the staff were fantastic. Two and a half hours later, when the results came back fine, I was reunited with him in the labour ward.

The midwives were wearing full PPE, which I was glad about, and were very caring. I gave birth at 2.56pm and went home at 7.30pm. It has definitely been more stressful than my first birth, but I’m just glad that our baby is here. 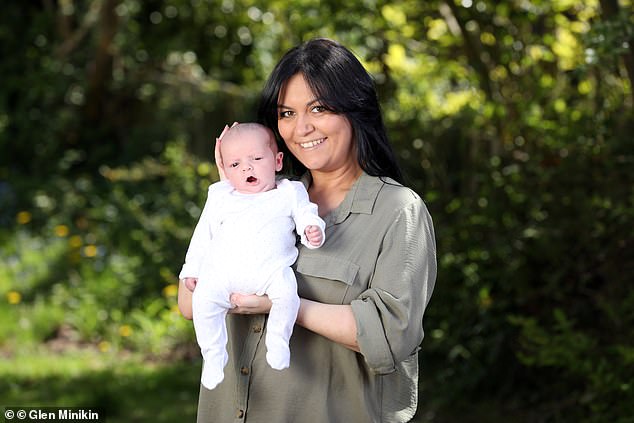 Georgina Chambi, 34, (pictured) who lives in Merseyside, went through pregnancy with her sister Alisha Chambi, 30, but were not around each other for their births

My sister and i gave birth. . . and our dad nearly died

Alisha and I went through pregnancy together, so it’s heartbreaking to give birth and not be around one another.

When I was told I’d need a C-section because the baby was breech, Melvyn was allowed to come into the theatre but he was fully dressed in PPE and had to sit on the other side of the room. My sister had to go in on her own to the hospital to be induced and her partner was only allowed to be with her a couple of hours before her baby arrived.

The drama didn’t end there either — about a week later, my 63-year-old father got the virus. He was put on a ventilator for four days — we thought we were going to lose him. He’s recovering now and says wanting to be there for his new grandchildren stopped him giving up. 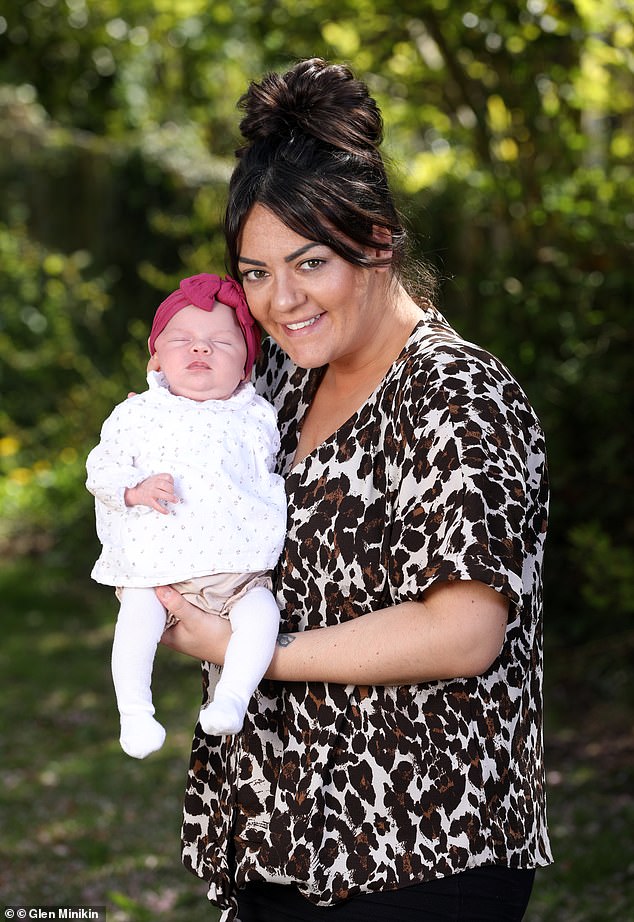 Emily Shenton, 41, is a recruitment consultant. She lives in Salford with her partner Clark, 37, who works in construction and her ten-year-old son Oscar from a previous relationship. Emily gave birth to second son Albie on March 31 at Bolton Royal Hospital, weighing 8lb 2oz. She says:

I’d hoped to give birth at a newly built midwife-led birthing centre but it had been shut because of the crisis. I’d been very nervous about being exposed to the virus in a hospital — but as it turned out, it was the best place I could have been.

Because of my age I was told if the baby was late I’d have to be induced. So when March 31 arrived, with no sign of the baby, I was very anxious. But by the time I was examined I was already in labour. I’d only felt slight twinges!

Then at one point in the afternoon, they realised his breathing was dropping. When the doctor felt my bump, she said the baby was facing the wrong way and I’d need an emergency caesarean. 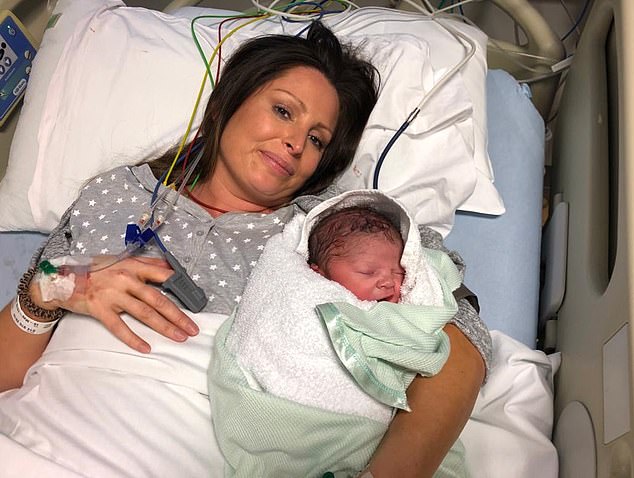 Emily Shenton, 41, (pictured) from Salford, revealed her partner Clark, 37, wasn’t allowed to come in to the hospital to collect their baby

It’s not the birth I expected but at least I was awake and Clark was with me. Baby Albie was born at 6pm. I was allowed to go home the next day, but by then the rules had changed and Clark wasn’t even allowed to come in to the hospital to collect the baby. Two midwives helped carry him to the car while I followed behind — I couldn’t carry him because I’d just had a c-section. The midwives and staff were wonderful, though at that stage no one was wearing masks.

Albie’s a month old tomorrow and the only downside is that his grandparents haven’t seen him yet. My mum is in her 80s and doesn’t even have a smartphone so I’m sending her postcards of him every other day.

Jessie Stewart, 28, works in insurance and lives near Milton Keynes with her husband Matthew, 27, a data science consultant. Jessie had their baby boy, Blair, on April 9, weighing 7lb 8oz. She says: 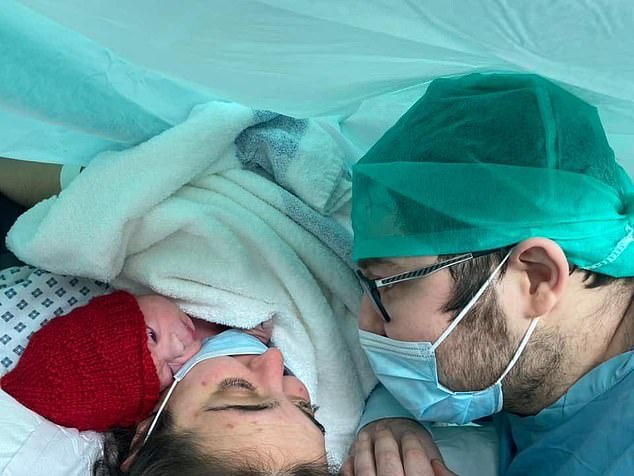 Jessie Stewart, 28, who lives near Milton Keynes, was rushed to hospital for an emergency c-section, because of complications during her planned home water birth. Pictured: Jessie with Matthew and baby Blair

After complications with my baby’s position during our planned home water birth, I was rushed to hospital in Milton Keynes for an emergency c-section. Matthew and I were masked up for surgery and the anaesthetist wore what looked like a full hazmat suit.

Blair and I had an infection, so had to stay in hospital for five days. It would’ve been lovely to have our parents here, as Blair is the first grandchild on both sides. Matt visited for 90 minutes a day and his family stood outside the window to take photos. I felt like a zoo animal!

The irony is my mum’s a health visitor, still visiting newborns, but we don’t know when she’ll be able to cuddle Blair. 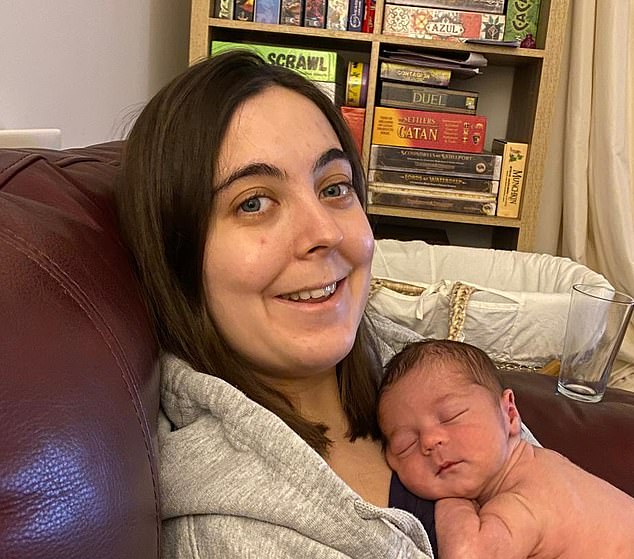 Jessie said she felt like a zoo animal, as Matthew’s family stood outside the window to take photos. Pictured: Jessie with baby Blair

Rebecca Gevelaar is 35 and lives in Hull with husband Anthony, 36, an electrician, and their son Sebastian, five. Rebecca, a dental practice manager, gave birth to daughter Darcie, 8lb 5oz at the Women and Children’s Hospital in Hull on April 6. She says:

Anthony and I self isolated for three weeks beforehand and on the day I went in for my caesarean, it was the first day PPE had been made mandatory in the wards so everyone was wearing masks.

I think Darcie was the first baby born at the hospital after the rule was made. It was strange but morale seemed high. We were apprehensive but the nurses were so reassuring. 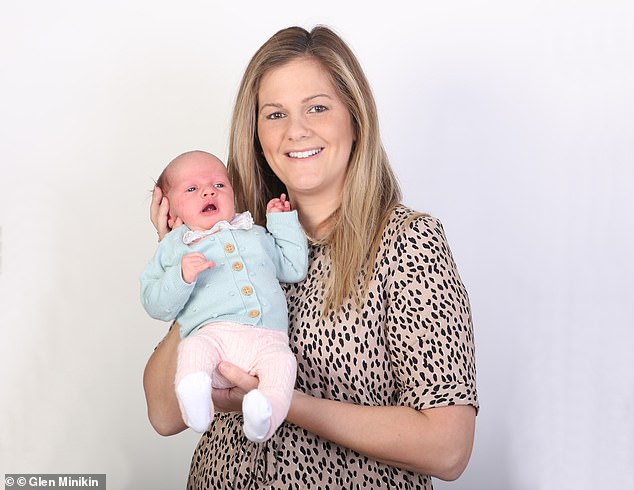 Rebecca Gevelaar, 35, (pictured) from Hull, who gave birth on on April 6, said everyone was wearing masks in the hospital ward

Anthony was at the birth and I was out the very next day.

Relatives have been to the house to look at her through the window, including my parents. Darcie is the first girl born in our family in 35 years so my mum is desperate to cuddle her first granddaughter.

The neighbours clapped for our new arrival — it was incredibly moving

Layla Pipe, 31, a bridal consultant, lives in Wargrave, Berkshire, with her husband John, 30, a firefighter. Layla gave birth to daughter Fallon, weighing 8lb 9oz, on March 29. They also have two other children, aged five and three. She says:

Fallon was four days old when the nation stopped for the first time on a Thursday evening to clap for the NHS.

As I stepped outside our front door to join in, all our neighbours applauded us and shouted congratulations, which was incredibly moving.

I’m enormously lucky to live in a small village because it means I haven’t lost the social aspect that you often do during maternity leave, let alone in the midst of a pandemic. 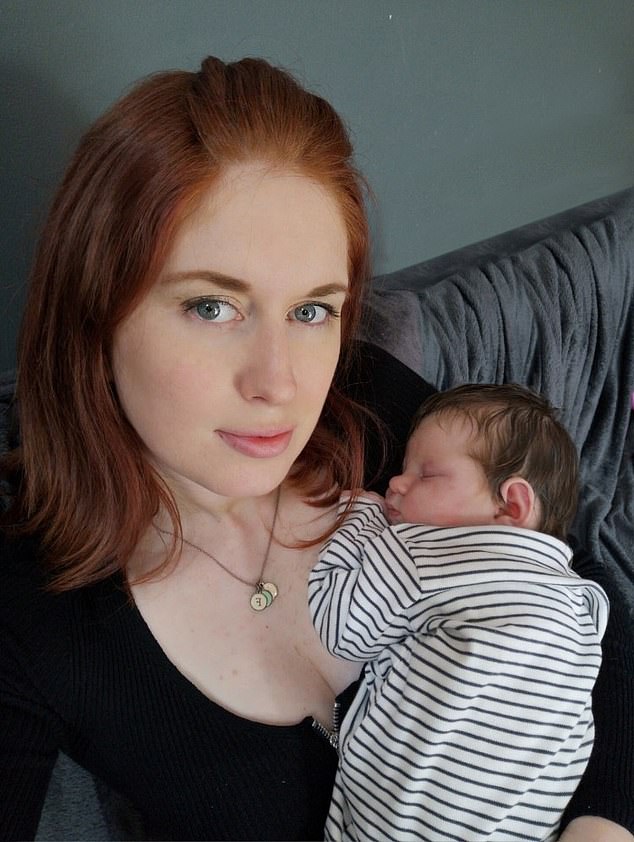 Layla Pipe, 31, (pictured) who lives in Wargrave, Berkshire, admits her greatest sadness is that her parents and John’s aren’t able to visit their granddaughter

On Wednesdays I join in with a village Zoom baby group, which is a lifeline. Neighbours have been so generous, leaving food supplies for us on the doorstep. One day I’ll make sure they get cuddles with Fallon to say thank you.

Before I had her, I was incredibly worried about the virus. I was eventually induced at 40 weeks but John wasn’t allowed to accompany me until I was on the labour ward. When the midwife saw I was getting upset she asked a healthcare assistant to hold my hand. She kept me calm. Thankfully, as I was transferred to the labour suite, John was at my side. And although I was given the choice of going home when I’d had Fallon later that day, I actually opted for an extra night in hospital to recover a bit rather than dashing home to two very excited children!

I do wonder whether Fallon feeds so well and has been sleeping for six hours a night because she’s had a gentler welcome to the world, without the overstimulation of visitors.

My greatest sadness is that my parents and John’s are really struggling with not seeing their granddaughter in the flesh.

Every now and then I have a wobble thinking that she’s now a month old and they still haven’t had a cuddle. Meanwhile, my grandma’s 93 and lives alone in Liverpool, minus any technology, so I had some photos of Fallon printed online and delivered to her so that she could see her great-granddaughter.

We’ve got to remember that by enduring separation from loved ones now it will hopefully mean everyone remains healthy enough to enjoy endless joyful cuddles in the future.