Last week – as I was grappling with the strange, tortured sleep that’s become my companion during the Covid-19 crisis – I got shaken awake by the sound of rotor blades. It didn’t have the insect-like buzz of the police helicopter, but the dull, monotonous thud of one of the giant Chinooks.

I later discovered it was ferrying medical personnel on a training run to the ExCel Centre in nearby Docklands – the RAF once again making final preparations to protect the capital from a deadly invader.

Of course, we are no longer supposed to use language like that. Over the past few days a liberal consensus has formed that such imagery is trite, even divisive. We are not a nation at war, and should not pretend to be. 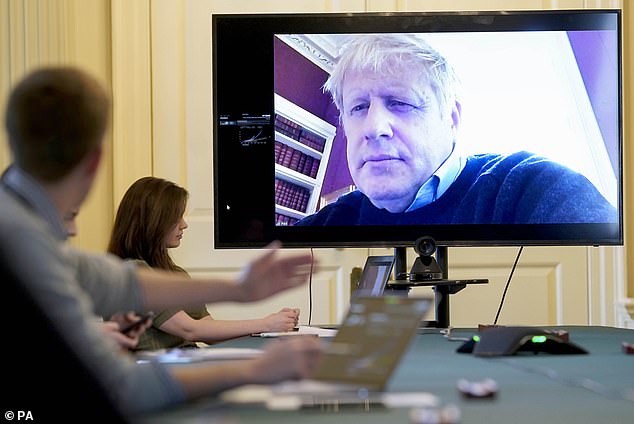 Prime Minister Boris Johnson chairing the morning Covid-19 Meeting in 10 Downing Street from No11 Downing Street, after self isolating after testing positive for the Coronavirus

This narrative then proceeded to devour everything in its path. Dominic Raab’s assertion that the Prime Minister was ‘a fighter’ was seized upon.

At best, it was fatuous. At worst, it implied those who succumb to the disease are weak. One of my regular social media followers even claimed it was further evidence that eugenics were at the heart of No 10’s coronavirus response.

And once again, with unerring consistency, the liberal consensus is wrong.

Of course we are a nation at war. A cruel, brutal, pitiless war – one that will claim thousands of lives, and shatter hundreds of thousands more, before it has run its course.

Nearly 3,000 military personnel are deployed in the fight against Covid-19. Another 20,000 stand at the highest state of readiness. Britain is in lockdown under powers never before deployed in peacetime. Our manufacturing industry is retooling to enable it to make its contribution to the war effort. The rest of the British economy has effectively been nationalised.

The reassuringly named Nightingale Hospital is basically just a sanitised version of the field hospital from M*A*S*H.

And that’s just in the UK. Because this is a global conflict. In Lombardy, there is nothing sanitised about the field hospitals.

In New York, giant trenches are being dug to create mass graves. In Wuhan, the police and military have been conducting house-to-house searches, rounding up the sick and confining them to giant quarantine centres.

But though this is a world war, it’s not liberal Britain’s war. It can’t be. The wrong people are fighting it. Actually, let’s be honest. The wrong person. There is nothing that will convince the British liberal elite to set aside their political differences and join a national effort led by Boris Johnson.

And over the course of the coronavirus crisis, Boris Johnson has done three more unspeakable things that the liberals will never forgive. 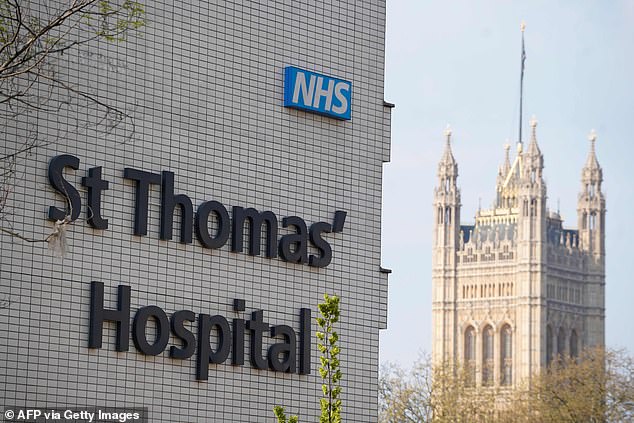 Boris Johnson was treated for the coronavirus at St Thomas’ hospital in London, pictured. In the background, Westminster Palace can be seen in the distance

The first was that he nearly died on them. Remember the caricature. Boris was Jeremy Corbyn’s ‘part-time PM’. The lazy Old Etonian dilettante who spent his time idling at Chequers when he was supposed to be leading the country.

And then the country saw the reality. A man who had worked himself into the ground – and then intensive care – in his attempt to keep Britain safe.

HIS second deadly sin dates back to the very start of the outbreak. Liberal Britain was again poised to pounce. This was a scientific and medical emergency.

The disdain of Boris and his Brexit colleagues for sober, expert analysis would lead us to catastrophe. At which point Boris stood up and placed his faith squarely in the hands of the medical and scientific experts.

Yes, there have been desperate attempts to peddle fake-news lines about ‘herd immunity’ and ‘taking it on the chin’. But deep down the Government’s critics know Boris decided from the outset to let his strategy be led by the science. They know the subsequent inquiry will confirm that. And they cannot stand that he has destroyed another of their sacred narratives.

But there’s one thing above all else the denizens of liberal Britain cannot forgive. And that’s that the people of Britain have chosen to again turn their backs on them and line up behind their Prime Minister.

The British people do want a fighter. They know we are engaged in the collective struggle of our lives. They have no interest in scoring political points, or undermining the struggle against Covid-19 by making it a proxy Brexit or culture war. They just want to see this evil virus beaten, so they can be reunited with their families and their friends.

And this weekend it can be beaten. If this is a war, then the next 48 hours represents our D-Day. Or C-Day.

The evidence is clear. As I wrote last week, away from the sneers and the smears, the Government’s strategy is working. Infections are flattening. The number of hospital admissions is flattening. The horrific death toll appears to be starting to decelerate. 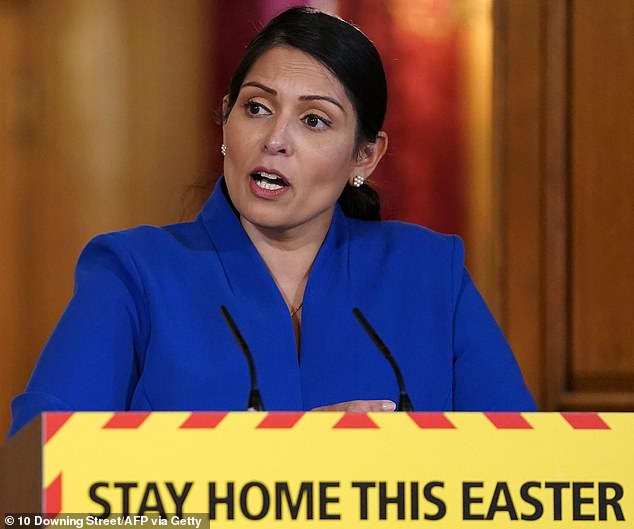 But we have now reached the defining moment. This weekend will decide whether we finally turn the tide of the outbreak, or give the virus a new lease of life.

AS A Government official explained: ‘Some people think it’s over and we can start lifting the lockdown. That’s like saying, “OK, we’ve beaten Hitler, let’s go home” back in 1944. We have to keep going. People need to stay at home over this bank holiday to keep themselves and their families and the NHS workers safe.’

No one inside Government or out of it is embracing the language of war for the hell of it. Or through misguided jingoism.

When the Queen – in the address that will come to define her reign – evoked the spirit of 1940, she was not trading in cheap anachronisms. She was issuing a rallying cry to the nation. One that liberal Britain cannot even hear, never mind bring itself to answer.

At least not for as long as Boris Johnson is Prime Minister. But that no longer matters. He is our leader for the duration.

If he has to spend the next few weeks away from the front line, so be it. His deputies are able. The strategy is in place. The country, with a few irrelevant exceptions, is united behind him.

All that is required is one last effort. Stay home. Protect the NHS. Save lives.

Yes, the battle is wearing. But we are close now. All we must do is ensure tomorrow is our longest day.