Justice Ruth Bader Ginsburg, who was hospitalized with a gallstone infection, participated in the remote arguments from her hospital bed. 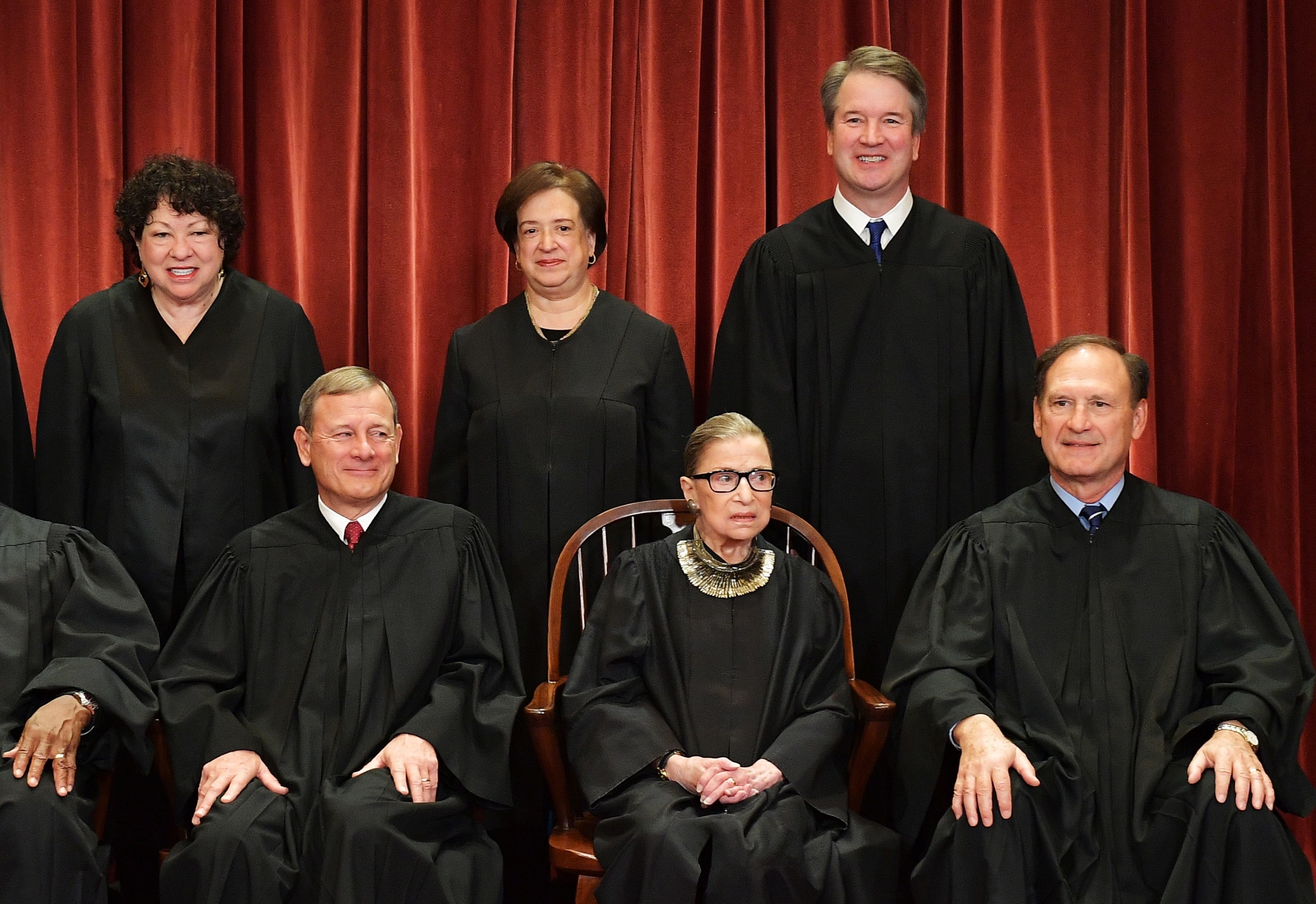 Justices of the US Supreme Court pose for their official photo in 2018.

On the third day of the Supreme Court’s historic livestreamed hearings, the court heard arguments in two combined cases about the Trump administration’s rules granting employers and universities the ability to refuse to provide birth control coverage for their employees for religious or moral reasons.

The cases, Little Sisters of the Poor v. Pennsylvania and Trump v. Pennsylvania, are the latest dispute to reach the courts over the regulation of reproductive healthcare. It directly pertains to a requirement instated under the Affordable Care Act requiring all employers to provide employees with insurance coverage for contraception. Wednesday was the third time this specific requirement has come before the Supreme Court, but the first since Justices Neil Gorsuch and Brett Kavanaugh, both appointed by President Donald Trump, joined the bench.

The Obama-era contraception mandate has been challenged by religious groups before, but the Trump administration’s rule exempting organizations with a moral objection to contraception coverage goes further. Opponents of the law, led by the state of Pennsylvania, argue it is too broad and could allow any employer to deny birth control coverage to its employees.

Wednesday morning’s hearing was lively and highly unusual. Not only is this week the first in history that the Supreme Court has held hearings entirely over the phone, allowing any member of the public to listen in, but it is also the first time that a justice has heard arguments and asked questions from a hospital bed.

On Tuesday, Justice Ruth Bader Ginsburg was taken to Johns Hopkins Hospital for treatment of a gallbladder condition. According to the Supreme Court press office, she was treated without surgery, and her condition was a “benign” infection.

Each time it was her turn to ask the counsel questions, Ginsburg gave a variation of the same speech. The Trump administration “tossed entirely to the wind what Congress considered to be essential, that women be provided this service, with no hassle and no cost to them.”

Justice Clarence Thomas, who is known for his silence and sometimes goes years without asking a single question during arguments, asked four questions on Wednesday. After initially being apparently absent or experiencing technical difficulties when it was first his turn to speak, Thomas then focused his questions on whether Pennsylvania’s case should have resulted in a nationwide block on the rules, rather than just within that state.

Chief Justice John Roberts — who often sides with the more conservative justices on the court, but after Justice Anthony Kennedy’s departure is now considered the court’s swing vote — seemed to align his questions with those of Justice Stephen Breyer, who is normally a member of the court’s liberal bloc.

Pennsylvania — which originally brought the Trump administration to court over the rules — had argued that they would cause harm to the people seeking birth control in their state, and financial harm to the state as a whole. On Wednesday, lawyers for the state contended that the Trump administration does not have the authority to expand exemptions to the contraceptive coverage mandate, and that the method with which they did so violated federal procedural law.

The Trump administration’s Department of Justice and a lawyer for the Catholic charity organization Little Sisters of the Poor countered these arguments, telling the justices that administration had a right to issue the exemptions under the Religious Freedom Restoration Act (RFRA) and that their clients’ “freedom of conscience” was being infringed upon by the contraception coverage mandate.

The ACA’s mandatory birth control coverage now has a long, complex legal history, spanning several court cases. Under Obama’s Department of Health and Human Services, churches and other houses of worship were already exempted from being required to apply abortion coverage, and following several court cases, additional “accommodations” were made to provide workarounds for religious organizations that did not want to directly provide contraception coverage. The organizations can fill out a form permitting their insurance company or the government to step in and provide contraception for the organizations’ employees, so they wouldn’t have to directly.

Some of these organizations, like Little Sisters of the Poor, took issue with having to fill out the form, arguing that enabling another entity to provide contraception makes them complicit in providing something to which they are religiously opposed. Others, like the secular anti-abortion group March for Life, argued that they should be exempted as well, as part of the mission of their organization is opposing certain types of contraceptives, so they shouldn’t be forced to provide coverage of it.

In response to these complaints, the Trump administration issued rules in 2017 allowing any organization with moral or religious opposition to providing contraception to opt out without having to fill out a form to replace the coverage for their employees. The rules were quickly blocked in the courts, so in 2018, the administration issued revamped versions of the rules that were essentially the same. The new rules included a low estimate of how many women would be made to seek contraception coverage outside of their employer if the rules should go into effect (“126,400 women of childbearing age” would be affected, the rules said, costing a total of “$67.3 million annually”). The administration also suggested that women left without contraception coverage by the rule seek free birth control from family planning clinics receiving federal grants.

Both Justices Roberts and Breyer told the attorneys on either side of the argument Wednesday that they didn’t fully understand what the problem was. They both cited the Supreme Court case they had decided in 2016, Zubik v. Burwell, which concerned a nearly identical issue. In Zubik, religious organizations argued that the contraceptive mandate violated their religious freedoms. Roberts and Breyer told the attorneys Wednesday that they didn’t understand why they couldn’t work out an agreement then, and they still don’t understand it.

Under the Obama administration’s accommodations, “the insurance coverer would not provide the services through the Little Sisters’ plan, but could provide them directly to the employee,” Roberts said to Department of Justice Solicitor General Noel Francisco Wednesday at the opening of arguments.

“Why isn’t that sort of accommodation sufficient? I did not understand the problem at the time of Zubik and I’m not sure I understand now.”

Justice Breyer agreed, saying that “the point” of the religious exemptions in the ACA’s contraception requirement is “to try to work out accommodations, because there can be some of the most difficult to resolve disputes and they can substitute a kind of hostility for harmony,” he said.

“So from that point of view, I really repeat the Chief Justice’s question: I don’t understand why this can’t be worked out,” he added.