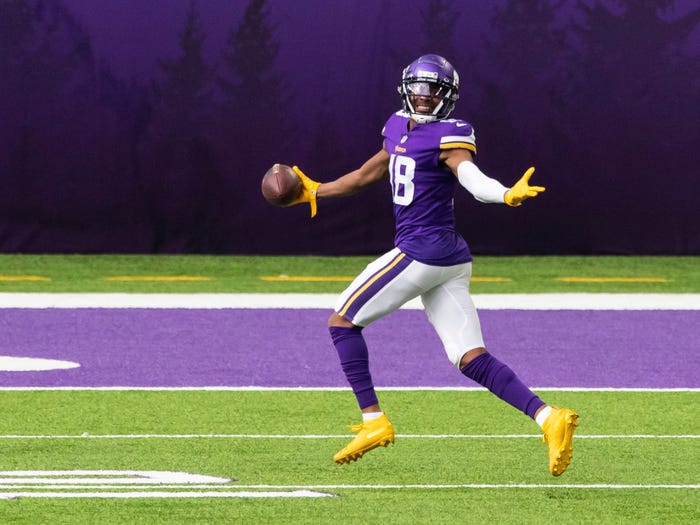 Through three weeks of the NFL season, fantasy owners are looking to make some changes. Maybe you've lost some key starting players to injury. Maybe your team is off to a disappointing start and in need of a shake-up to help spark your run to the playoffs.

To help, we've collected 16 waiver-wire targets for fantasy players looking to add some depth to their rosters early in the season, going position by position to give you the best chance of earning your way to a first-round bye in the fantasy playoffs.

All ownership percentages come from ESPN, and scoring is based on a standard ESPN points-per-reception format.

One thing to know: Ryan Fitzpatrick was a top 10 quarterback in Week 2 and a top-five quarterback in Week 3. Next week, he goes up against a Seahawks defense that has yet to hold an opponent under 25 points and has conceded an average of 440 passing yards per game through three weeks.

One thing to know: Foles stepped in for Mitch Trubisky for the Bears in the second half on Sunday against the Falcons and threw three fourth-quarter touchdowns to lead the team to a comeback victory. The Bears have plenty of talent on offense, and Foles should have plenty to work with moving forward as the team's starter.

One thing to know: Mike Davis was one of our must-add players last weekend as he's stepping in for Christian McCaffrey in the Panthers offense, and on Sunday, he showed what kind of numbers he could put up as the lead back. He's still available in nearly a quarter of ESPN leagues, so be sure to check if you can snag him before it's too late.

One thing to know: For two weeks now, Henderson has been the featured back out of the Rams offense, and he has two great matchups coming up against the Giants and the Washington Football Team. He's still available in a third of ESPN leagues, but he won't be for long.

One thing to know: Seahawks running back Chris Carson went down with an injury late in the game Sunday against the Cowboys. If he's going to miss multiple weeks moving forward, Carlos Hyde jumps to the most important fantasy pick-up of the week. Watch those injury reports as the week goes on.

One thing to know: With San Francisco dealing with so many injuries to their starting lineup, someone needed to step up for the 49ers, and out of the backfield, it was Jeff Wilson. While his rushing numbers weren't remarkable by any means, Wilson got 12 carries out fo the backfield and three more receptions. With that kind of involvement in the offense, he'll have value for weeks to come.

One thing to know: Predicting the Patriots backfield is notoriously impossible, but Rex Burkhead proved that Cam Newton isn't the only person capable of punching the ball in from the goal line for New England on Sunday. He's likely already had the best game of his season, but in deeper leagues, he's well worth a roster spot with bye weeks coming up.

One thing to know: Rookie Justin Jefferson had his coming out party on Sunday for the Vikings, going off for 175 yards and a score. The Minnesota offense hadn't looked great through two games this season but showed plenty of spark in Week 3. If they're going to be good moving forward, Jefferson will be a big part of their success.

One thing to know: Through three weeks, Bengals quarterback Joe Burrow is averaging 47 pass attempts per game. Safe to say, there are plenty of targets to go around in the Cincinnati offense, and Tee Higgins' role in the game plan should only increase as the season goes on.

One thing to know: The 49ers are looking for any warm bodies to fill out their offense after two weeks of brutal injuries across their roster. Rookie Brandon Aiyul is a valuable asset for the team as they scramble to reinvent their offense on the fly. He's capable as a receiver, rusher, and nearly whatever else San Francisco might need from him.

One thing to know: Alshon Jeffery still hasn't played a game this season, but he was back at practice this week and could be ready to go soon for the Eagles. As things stand, the Eagles are desperate for more offensive weapons to spread the ball around to, so if Jeffery gets the all-clear before Sunday night's game against the 49ers, he could have an immediate impact on the team.

One thing to know: Projecting Cedric Wilson's week-to-week value is tough, and chances are if you're in a standard 10-team or 12-team league, there are more reliable options available to you on the waiver wire. That said, for those playing in deeper leagues and need receiver depth, it's clear Wilson is ready to make the most of whatever touches he can get in the Cowboys offense.

One thing to know: Braxton Berrios has now scored in two straight games for the lowly Jets. New York's offense isn't capable of much, but they are still an NFL team, and they will be throwing the ball from time to time. Berrios is out there and right now, is the only guy on the team that seems capable of moving the ball forward.

One thing to know: Six of Jimmy Graham's 10 targets on Sunday came after Nick Foles took over for Mitch Trubisky in the second half. In his past time in Philadelphia, Foles has made good use of his tight ends, and Graham could become a frequent target for him should he continue to move forward as the starter.

One thing to know: Mo Alie-Cox has been a top-10 tight end for the past two weeks and has favorable matchups against the Bears and Bengals coming up on the schedule. If you need depth, he's an option.

One thing to know: Aaron Donald gets to go up against the New York Giants and the Washington Football Team over the next two weeks. Hop on board while you can.