Michaela Coel's I May Destroy You has been widely touted as one of the best shows of the year for its genre-defying look at sexual assault.

Based on the real-life experiences of Coel, an English actor, screenwriter, director, producer, and singer, it was described by The Guide and Green Guide critic Debi Enker as "unlike anything you've seen before", and a show that should be savoured rather than sped through. 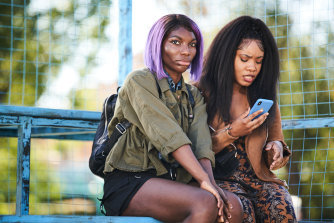 I May Destroy You creator Michaela Coel (left) wanted the show’s 12 episodes to be viewed weekly rather than in one go. Credit:HBO/Foxtel

Though Coel's intention was for the 12 episodes to be released weekly, the entire season is available to view immediately in Australia. So does binge-watching the series lessen its impact?

"Some genres don't lend themselves to bingeing," says Spectrum deputy editor Kylie Northover in this week's episode of The Televisionaries. "I couldn't watch three episodes of Game of Thrones. But [I May Destroy You] is so compelling, I don't have a problem with it."

Host Louise Rugendyke says she found the show "so compulsive" that it almost lends itself to taking a break between episodes, so the impact or meaning of key moments is not lost.

Enker agrees, noting that our viewing habits have changed dramatically in the five years since Netflix launched in Australia with the first three seasons of House of Cards as a major drawcard. Viewers have since become accustomed to being able to binge entire seasons in one go. But when a creator wants a series to be savoured, Enker says it's generally for good reason.

"The episodes do really move around a lot … you can't pick where it's going to go and I think you'll lose some of that element of surprise if you devour it all in one go," she says.

Later in the podcast, the experts debate oddball British series Spaced, which launched Simon Pegg to prominence in 1999, and play a TV show guessing game. Previous episodes of The Televisionaries have covered topics such as the hugely popular Karate Kid spin-off on Netflix and the gripping true crime documentary I’ll Be Gone in the Dark.