Home » Lifestyle » TikTok ‘has given new artists a chance’

TikTok ‘has given new artists a chance’

TikTok has only been part of our lives for two years, but it’s already had a massive impact on the music business.

Now the app has told Radio 1 Newsbeat that agents and managers are asking it for advice on how to get their artists featured.

And it’s not just about viral dances anymore.

Newsbeat’s spoken to artists who say using TikTok has boosted their careers at a time when live music’s more or less off the agenda.

‘What’s exciting is the scale’

Nina Nesbitt was set to make her third album in Sweden this year but, like many artists, it was put on hold during lockdown.

“In all honesty, my label told me to get TikTok two years ago.

“So back in March I thought ‘why not?’ – and my first video got nearly a million views in a few days.”

Her arrival on the app puts her among a wave of acts changing how they release music to tap into “a new world”. 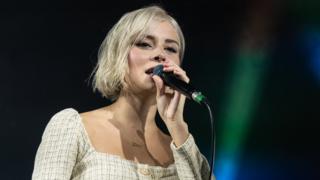 The Scottish singer isn’t new to finding audiences online. She started out on YouTube, launching her channel in 2009 while she was at school.

But she says interaction with fans on TikTok feels different.

“There’s people who haven’t heard of me from all over the place, but others saying, ‘Where have you been? I used to love listening to you’.

“It’s literally just me making videos in my flat so what’s really exciting is the scale of people that you can get out to really fast.

“It’s not necessarily always just the music being promoted by a big label that’s doing well.

“It’s also given new artists a chance instead of a label just going, ‘OK let’s blow this song up’ and putting money behind it.”

Based on figures seen exclusively by Newsbeat, Nina’s taste of success on TikTok is one of many for musicians using the platform in recent months.

The app, which rarely publishes data on user numbers or activity, has revealed the summer’s biggest tracks had more than 6.5bn video views in the UK alone, between 1 June and 12 August.

The app’s Songs Of The Summer chart, topped by DaBaby and Roddy Ricch’s Rockstar with 825m video views, has been released during a period of what the platform calls “accelerated growth”.

Even with increased use of the platform, TikTok’s UK head of music operations, Paul Hourican, says the popularity of some songs from new acts is still “really surprising”.

“In the UK, like in lots of places, we’ve gone through a pretty tough time,” Paul tells Newsbeat, suggesting the coronavirus pandemic is one of the reasons behind a spike in people using the app.

“What we’re seeing is a real gathering around music on TikTok over the past few months.”

Many of the songs in the top 10 have been the soundtracks to viral dance challenges, largely created by relatively unknown acts.

Paul suggests that’s down to fact that not even the app’s bosses can predict which songs will take off.

“But what that does mean going forward is that TikTok is really important in helping artists be discovered more.

“It encourages users to go off and find out more about the artists they’ve heard and listen to their music in full… I think it’s pretty undeniable that it drives music discovery.”

He uploaded an instrumental track called Laxed Siren Beat Loop earlier this year from his bedroom in Manurewa, New Zealand.

Its links to his Polynesian roots inspired the culture dance challenge, which saw users celebrating their heritage by dancing to the song in traditional costumes around he world.

It quickly got millions of hits and caught the attention of Jason Derulo who sang over the track to create Savage Love, which became the UK’s second-biggest selling song of the summer, according to the Official Charts Company.

Joshua says the attention from new fans, DMs from Jason Derulo and “heaps of labels” wanting to sign him was “really overwhelming” to start with.

“Everything stared happening at the same time… I was just blowing up on these charts. It’s really exciting now,” he tells Newsbeat.

“I always wanted to but never though I could make a career out of music.”

Having signed a worldwide deal with Columbia Records, the teenager has a management team helping him decide which beats to put on TikTok.

“I didn’t really have any big resources or anything like that… now I’m planning to make beats with other artists.

“It’s been crazy seeing my music get out there.”

Paul Hourican says TikTok’s seen lots of “artists and labels leaning in and using the platform” to change how they release music after seeing the potential for success on the app.

Dua Lipa is asking TikTok fans to help create her new video by dancing to her tracks while David Guetta and Sia are putting their latest collaboration on the app before it’s officially released.

“The numbers we’ve seen from things like the summer chart go a long way in terms of building momentum on the platform,” says Paul.

“That obviously can then translate to success off the platform as well with people listening to he whole thing somewhere else.”

Nina Nesbitt also knows she can now make the most of TikTok when she eventually has new music ready to release.

“I’ve figured out certain songs are doing better because the parts available on there were the chorus or the main lyric, while others were just an intro without any lyrics.

“So since then I’ve gone back to label and said, ‘You need to sort the time codes out so that it’s a bit of the song people would want to use’.”

While she says she won’t write a song “specifically for TikTok” the singer will change how she releases music on the app.

“If a song is good then that should do the work for it being successful.

“It worked for Jason Derulo though I guess… I wouldn’t be surprised if writing for TikTok starts happening a bit more.

“It’s definitely having an influence on the charts.”

The link between tracks doing well on TikTok and success on the Official Charts isn’t lost on Paul, who says “100%” there’s a conversation to be had about the potential of the platform eventually having a direct impact on the top 40.

“Something we should look at in the future is how we can fully reflect the creations and the time spent on the platform from users in making videos.

“How should that be reflected in the most popular songs in the country?”

As the app’s momentum builds, it also faces the challenges that the likes of Twitch, YouTube and Spotify have all seen with artists suggesting they aren’t properly recognised financially for the views and attention their work gives the platform.

It’s something Paul is aware of going forward.

“TikTok already has agreements in place with all the rights holders so all the music is properly licensed.

“But obviously music is a core part of TikTok’s DNA.

“As the platform grows we want to take everyone with us… we’re incredibly thrilled at the opportunities we’re able to provide with music and hopefully we will continue to grow… inspiring a next generation of artists to do the same”.