China has responded to the US attempt to ban, or force a sale, of ByteDance’s wildly popular app, TikTok. In doing so it has revealed what’s really at stake in the Trump administration’s escalating assault on its technology companies.

Both countries are now asserting national security concerns in relation to TikTok – the US claiming China could exploit American users’ data for nefarious national strategic purposes and China demonstrating concern that the US is using the threat of the ban to acquire valuable intellectual property and thwart China’s economic ambitions. 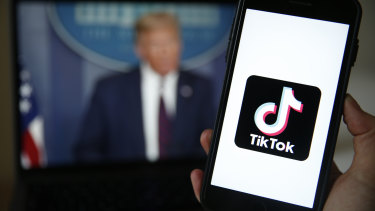 TikTok’s Chinese parent has been order by President Donald Trump to divest is US operations.Credit:Bloomberg

There’s irony in the stand-off; a reversal of roles. The US has long claimed that China has used its laws and regulations to force US companies to transfer valuable intellectual property in order to operate within China. Now the Chinese are effectively making that same claim in relation to TikTok.

Last Friday China responded to the Trump administration’s blunt demand that either ByteDance shut TikTok’s operations down in the US or sell the app, the most internationally successful app ever developed by a Chinese company.

In essence it has imposed restrictions on exports of the artificial intelligence technologies that underpin the app or, as China’s Ministry of Commerce put it, the "personalised information recommendation services based on data analysis."

TikTok uses artificial intelligence for the algorithms that enable the app to tailor its video offerings to individual users, based on their previous viewing histories.

The depth and detail of its user information and the sophistication of its predictive algorithms are such that ByteDance sees itself as a legitimate potential rival to the giant US online advertising businesses like Facebook or Google.

The new regulations aren’t designed solely for TikTok, although they may have been precipitated by it, but cover all cross-border transfers of restricted technologies, whether via a sale or, indeed, internal transfers. Chinese companies will now have to obtain regulatory clearance before deploying technologies the state regards as sensitive offshore.

For ByteDance that requirement is a problem. Donald Trump, personally, has given it until September 15 to either sell TikTok to a US company or shut it down.

ByteDance has been negotiating with a consortium of Microsoft and Walmart, another involving private equity firm Centricus Asset Management and social media platform Triller and with Oracle for what could have been a $US20 billion-plus ($27 billion) sale of its US and other international operations. 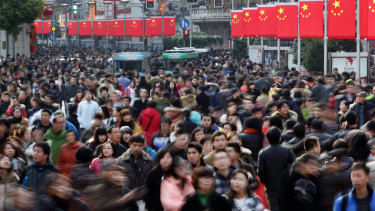 China and the US are locked in a technology arms race.Credit:Bloomberg

At the very least the new regulations will either delay the negotiations beyond the deadline while ByteDance waits to see if it can get a regulatory clearance or significantly devalue the deal if the affected technologies have to be quarantined and excluded, if that were possible. In the meantime the clock is ticking loudly in the countdown to Trump’s deadline.

The Chinese response to the US ultimatum to ByteDance could be seen as retaliatory and a sign that China is finally reacting to the broader US assaults on its technology companies.

The most notable of those has been the ban on telecommunications giant and China’s technology flagship, Huawei, including restrictions on access to the chips essential to its 5G technologies. The US is considering wider restrictions on exports of semiconductor manufacturing equipment and software, a sector where China badly lags the US.

While China would be mindful that its actions could provoke an even stronger response from the US (which is already threatening to ban Tencent’s WeChat in an extension of its crackdown on Chinese social media apps) the US attempts to constrain its technologies and companies threatens a key strand of its economic ambitions.

The list of technology exports China is now restricting or banning – using the same "national security" criteria as the US has used as the basis of its bans – includes agriculture, pharmaceutical IP and laser and other high-tech segments that could be categorised as "NextGen" technologies.

They form part of the "Made in China 2025" program that, with a lot of state direction and financial assistance, is designed to push China’s manufacturing industries up the value chain and give China parity with the US as a leader in the technologies that will shape this century.

Artificial intelligence, quantum computing, 5G, pharma, bio-tech, aerospace, semiconductors, IT, robotics and automation, "green" technologies and the "internet of things" are key components of the strategy that China is updating this year to provide a road map for its strategic industries through to 2035.

Its ambition is to be the world leader in those categories and it is clearly making rapid progress. Last year, for the first time, China filed more patents internationally than the US.

The US is determined to protect its historic leadership in the technologies that will define economic – and military – supremacy in this century while China is trying to reduce its dependence on the West and become more technology self-sufficient to offset the US effort.

It was the making of its ambitions transparent with the "Made in 2025" manifesto that galvanised the China hawks in the Trump administration, who have accused China of forcing US technology transfer and even theft of US intellectual property to facilitate those ambitions.

The US is determined to protect its historic leadership in the technologies that will define economic – and military – supremacy in this century while China is trying to reduce its dependence on the West and become more technology self-sufficient to offset the US effort.

This year it has increased tax breaks and investment incentives to boost its research and development efforts and domestic production of chips and software. It is devoting tens of billions of dollars to technology research and development, particularly to artificial intelligence R&D, where its stated aim is to be the world leader by 2030.

The US has responded with plans of its own for the $US1 billion-plus funding of AI and quantum computing research hubs.

There is a technology arms race occurring as the US tries to defend its technology leadership against the Chinese challenge, cutting off access to its technologies, weaponising the US dollar, fanning security fears and deploying diplomacy backed by the threat of sanctions to enlist/coerce allies into joining it in the attempt to frustrate China’s aspirations.

The square-off over what appears to be a somewhat cheesy social media app points to the larger contest occurring.

Both sides are attempting to both protect and expand their technology strengths in what is rapidly becoming a new front, alongside the tit-for-tat tariffs imposed during the US-initiated broader trade frictions, in the developing Cold War between the two countries as the US tries to defend, and China challenges, the post-war global hierarchy.

Start the day with major stories, exclusive coverage and expert opinion from our leading business journalists delivered to your inbox. Sign up for the Herald‘s here and The Age‘s here.

A concise wrap of the day on the markets, breaking business news and expert opinion delivered to your inbox each afternoon. Sign up for the Herald‘s here and The Age‘s here.

Most Viewed in Technology