The Hollywood Foreign Press Association (HFPA), the group of about 90 international journalists that runs and votes on the Golden Globes, faced a public shaming at Monday’s ceremony after it was forced to use the awards show to address criticism about the lack of black members in its organisation.

During the show, HFPA president Ali Sar, vice president Helen Hoehne and former president Meher Tatna took to the stage to admit the organisation had “our own work to do”.

“Just like in film and television black representation is vital, we must have black journalists in our organisation,” Hoehne told viewers.

“We must also ensure everyone from all underrepresented communities gets a seat at our table, and we are going to make that happen,” Tatna added. 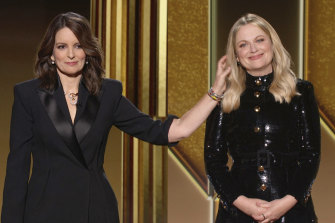 Golden Globes hosts Tina Fey and Amy Poehler called out the HFPA in their monologue.Credit:AP

Criticism of the HFPA surged last month after the Los Angeles Times published a report exposing a “culture of corruption” at the organisation with claims members often exchanged votes for perks and access to celebrities. The organisation responded to the piece by saying it repeated “old tropes about the HFPA” and reflected “unconscious bias against the HFPA’s diverse membership.”

But a subsequent report by the Times into the HFPA’s diversity unearthed that the organisation currently had no black members and hadn’t for more than 20 years – a fact many saw as the reason why a number of black-led projects, including films One Night in Miami, Ma Rainey’s Black Bottom, Judas and the Black Messiah and Da 5 Bloods, were overlooked in the major nominations.

In the leadup to the awards Hollywood figures including Ava DuVernay, Judd Apatow and Mark Ruffalo were among the major stars online calling for the HFPA to address the issue, using the hashtag #TimesUpGlobes.

At Monday’s ceremony, hosts Tiny Fey and Amy Poehler also explicitly addressed the criticism during their monologue, going so far as to use the moment to explain to the organisation’s members why black representation in its ranks was important.

“The Hollywood Foreign Press Association is made up of around 90 international, no black, journalists that attend movie junkets each year, in search for a better life. We say around 90 because a few might be ghosts and the German is just a sausage that someone drew a little face on,” Fey joked.

Poehler added: “Everybody is understandably upset with the HFPA and their choices. Look, a lot of flashy garbage got nominated, but that happens. That is their thing. But a number of black actors and black-led projects were overlooked.”

Fey said while viewers understood that “award shows are stupid” and “a scam invented by big red carpet, to sell more carpet”, “even with stupid things inclusivity is important.”

“There are no black members of the Hollywood Foreign Press,” she said. “I realise HFPA maybe you guys didn’t get the memo because your work place is the back booth of a French McDonald’s, but you’ve got to change that. So here’s to changing it.”