Home » Lifestyle » Tinder? No, romance will have to wait: ZEINAB BADAWI

Tinder? No, romance will have to wait: ZEINAB BADAWI

Tinder? No, romance will have to wait: She’s a single mother who juggles four kids with a stellar broadcasting career. But that hasn’t stopped ZEINAB BADAWI, 61, putting her love life on hold to become William and Kate’s new royal appointment

They say that if you want something done you should ask a busy woman. There seems no doubt it was by this token that the Duke and Duchess of Cambridge approached veteran BBC broadcaster Zeinab Badawi to join the board of their charitable Royal Foundation.

Zeinab, 61, already has plenty going on: not only is she a single mother to two boys and two girls aged from 20 to 25, she presents two BBC news shows —HARDtalk and Global Questions, runs her own television production company and sits on various other ‘royal’ boards. But this latest appointment is potentially Zeinab’s most challenging.

The Royal Foundation is, after all, best known as the glitzy charitable brainchild of what — all too briefly — seemed such a hopeful merger of the two royal houses, Sussex and Cambridge. 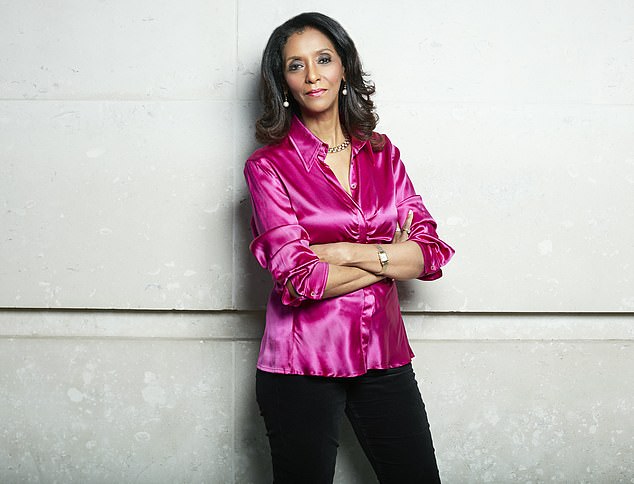 Zeinab Badawi, 61, (pictured) who has lived in the UK since age two, reflected on being approached to join the Duke and Duchess of Cambridge’s board for their Royal Foundation

Who can forget the sight, less than three years ago, of the ‘fab four’ Harry, Meghan, Kate and William sitting on the podium together, chatting about their pet projects, including mental health and empowering girls and women.

The Foundation was originally set up by the brothers in 2009, but gained real traction when it was joined by Kate, after her wedding, in 2011 and Meghan in 2018, and all was well for 14 months.

But then Meghan and Harry announced they were quitting the Foundation to set up their own charitable vehicle — and went further by departing from the Royal Family and the UK. ‘So now it’s just the Duke and Duchess of Cambridge again,’ Zeinab explains.

Before they left, Meghan and Harry made it clear one of their principal focuses would be Africa, where Harry said: ‘I feel more like myself than anywhere else in the world.’

Now, Kate and William are doing their darndest to continue upholding the absent Sussexes’ interests on the continent, which holds a big place in William’s heart, too.

He was seen as the safest pair of hands to take over from the Queen 18 months ago as patron of the 119-year-old Royal African Society, of which Zeinab, who was born in Sudan but has lived in the UK since she was two, is chair. ‘It was obvious Prince William had such a genuine commitment to the continent,’ she says.

So natural and unaffected is Zeinab, it’s easy to see why the Duke decided she was perfect to join the Royal Foundation board. She also bonded with Kate, finding herself drawn to the Duchess’s work on early childhood. 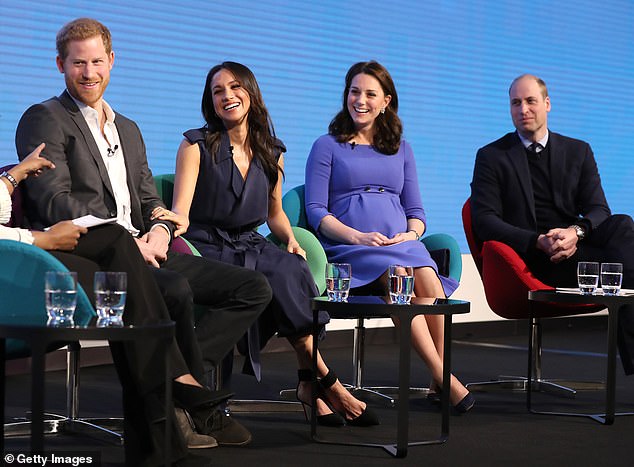 Zeinab revealed she was able to bond with the Duchess of Cambridge because of Kate’s work on early childhood. Pictured: Harry, Meghan, Kate and William back in February 2018

‘The Duchess and I could really relate,’ says Zeinab. ‘She has three young children; I have four children; she is very dedicated to early years.’

Indeed, Kate has just announced the result of the Royal Foundation’s ‘five big questions on the under-fives’ survey, which showed the extent of parental loneliness in lockdown and highlighted the important of those early years.

‘In my travels all over the world, I’ve seen how important those zero to five years are in determining the outcome of a person’s life,’ says Zeinab.

She certainly could offer the Duchess a few tips on family life, having had her brood extremely close together (‘I had three kids in three years — at one point I felt like I was having a baby every three months’).

Three still live at home and all four are in higher education, so she’s still far from relinquishing her maternal duties.

‘During the first lockdown, I had the two boys with me — one’s 6ft 6in, the other 6ft 3in — so my abiding memory is of cooking endlessly. I just wait on my children hand and foot,’ she says.

Zeinab is one of six children, whose newspaper editor father moved his family to London from Khartoum to start a job with the BBC’s Arabic Service. 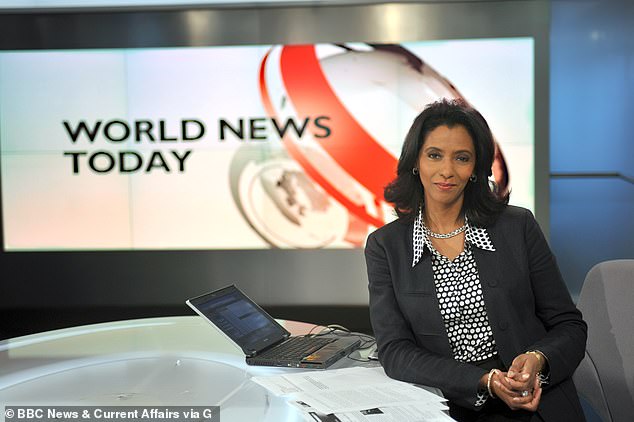 Zeinab (pictured) who studied at Oxford university, said she was the only black girl in her college and only one in four students were female

At home, her parents spoke Arabic and Zeinab and her siblings responded in English. ‘We were brought up to believe there was no confrontation between our two backgrounds,’ she explains.

Zeinab attended an all-girls’ comprehensive in Haringey, North London, before winning a place at Oxford to read politics, philosophy and economics.

Today, that elite university is intent on making its intake more diverse but, in the 1970s, Zeinab was a novelty. ‘I was certainly the only black girl in my college, and I’m struggling to remember another throughout the university. Then, only one in four students was female and fewer than half had gone to state schools.’

Zeinab says she’s never encountered direct racism. ‘I’ve never had someone be overtly racist to my face, perhaps they were behind the scenes.’ After thinking a while, Zeinab comes up with a 15-year-old incident when she and her ex-husband were visiting their cottage in the Cotswolds.

‘I was sitting next to someone and saying how beautiful it was and she said: “Can you relate to the English countryside?” I was taken aback, I said: “Well, yes, I went to Oxford — it’s only about 15 miles from here.”

‘I think my brothers would tell a very different story,’ she adds. ‘But just because I haven’t really experienced racism doesn’t mean it doesn’t exist. I believe racism and sexism are huge problems and I’m glad that thanks to the Black Lives Matter movement, a debate has been energised.’ 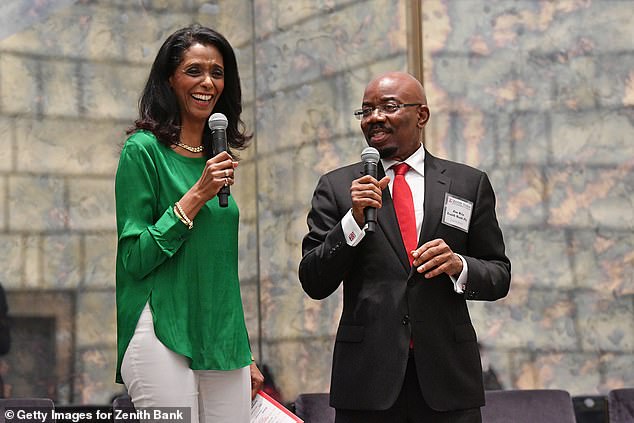 Zeinab (pictured left) who claims retirement wouldn’t suit her, recalls her father writing a story on his laptop when he died at 90

Another prejudice that may — or may not — have affected Zeinab is ageism. Back in 2009, there was a brouhaha after the BBC was accused of discriminating against older female presenters, replacing judge Arlene Phillips, 66, on Strictly Come Dancing with Alesha Dixon, then 30.

‘Retirement wouldn’t suit me. My father, when he died at 90, was still writing a story on his laptop — that will be me.’

Yet the truth is Zeinab looks a good two decades younger than her birth certificate might reveal. What’s her secret?

‘I don’t smoke, I don’t drink — people always think I must be a recovering alcoholic, but the truth is it just doesn’t agree with me. I go on my running machine and do some weights, but I’m naturally slim, so I’ve never struggled with my weight, which is lucky.

‘Television makes everyone seem fatter than they are, so having a naturally slim face means I get sort of free Botox for TV.’

When it comes to real Botox, however, Zeinab’s a refusenik. ‘Everyone has the right to do whatever it takes for them to feel good about themselves but, in my case, that isn’t surgical interventions — though I love my lotions and potions. You should see my bathroom cabinet!’ 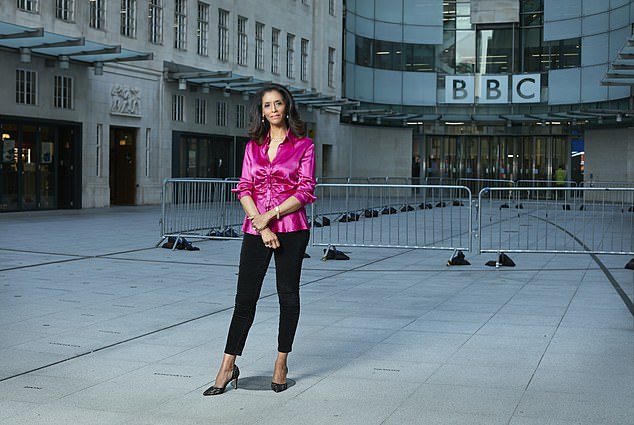 Zeinab (pictured) said there has been a lot of interruptions in her career, despite having help with childcare

Zeinab’s career saw her rise rapidly from BBC Manchester, to Channel 4 News, where she spent a decade anchoring besides Jon Snow, then back to the BBC.

Once again, it’s impossible to know if she might have risen even higher without the third ‘ism’ — sexism — the extent of which, in recent years, has been revealed by female BBC staff.

‘You have people like Selina Scott calling out sharing a sofa with the late Frank Bough and discovering she was paid a fraction of what he was. Good on her,’ Zeinab says.

You wonder if Zeinab could have reached even dizzier heights if she had not had such a large family.

‘I was lucky enough to have help with childcare, but there were still a lot of interruptions to my career and it was exhausting — I’d go to work for a rest,’ she smiles. ‘But they are my pride and joy.’

That’s clear as her two youngest — 20-year-old Zachary and 22-year old Hannah, wander in and out — with Zeinab cooing, ‘Do you need something to eat, honey?’ ‘Are you OK, sweetheart?’.

Their father, to whom Zeinab was married for 18 years, worked in finance but, a decade ago, they divorced. 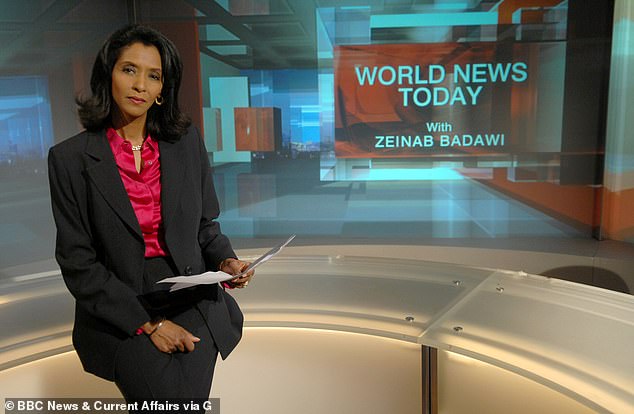 Zeinab (pictured) said she enjoys her own company, but would rather to be happy with someone else as she grows old

‘He’s a very good father, who lives nearby, so the children have always come and gone between the homes,’ she says.

So has Zeinab met someone else? ‘Working and looking after the children and doing both as well as I could, probably didn’t leave me enough space to remarry,’ she says. ‘But my child-caring duties are over next year when my youngest finishes university.’

Will she sign up to Tinder? Zeinab laughs. ‘Not Tinder, but let’s see. I’m naturally gregarious. I enjoy my own company if I’ve got something to do. But, although I will manage growing old alone and keep myself busy, I think on balance I would rather be happy with someone else.’

Meanwhile, there’s so much to do — her taxi’s arriving to whisk her to the BBC for an afternoon’s presenting, her diary’s filled with virtual meetings regarding her numerous jobs and — of course — there are more upcoming Zooms with the Duke and Duchess of Cambridge.

Romance, for the time being, will have to wait.

History Of Africa with Zeinab Badawi is available on YouTube.