Home » Lifestyle » To the man who gave me the book that changed my life, thank you

To the man who gave me the book that changed my life, thank you 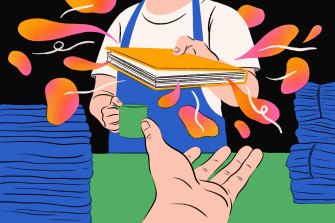 Morris Gleitzman: “How could he have known how much I needed that book, or how little I knew I needed it?”

When I was 14, I decided I was finished with books. Completely and forever. It was a big change of mind. My childhood had been a passionate love affair with books. In bed, we were magic together. Give me a torch and an unfinished story, and my eyelids were insatiable, staying open hours later than the official closing time. Decades later they’re still stretched out of shape, but fortunately not as much as the handles on my mother’s shopping bag after our twice-weekly visit to the children’s library.

So, what happened? Why the change of mind? I wish I could tell you it was something innocent, like the TV we got at the time, our first. Or pop music. Or drugs. But I can’t. The truth, gentle reader, is even sadder. It was my school.

I’m sure they didn’t mean to slam the covers shut on my young literary life. It couldn’t have been easy being at a bog-standard suburban London boys’ grammar school desperately anxious about their academic ratings. Urging us students to go the extra yard. Often to pick up the blackboard duster they’d just thrown at our head. Or the airborne ashtray. Or, you’ve guessed it, the brutally hurled book.

Shamefully for a child of the ’60s, I confused the medium with the message and decided I was moving on from books. Mentally at first, via my own private strike action. Perfecting a facial expression of deep and appreciative focus, which let me have any number of books open on my desk without reading a word.

The time I changed my mind…

When I turned 16, the school and I parted company with mutual relief. And because cranial bruising often makes it difficult to fully appreciate the literary canon, I let that slip away too.

Non-literary London was a wonderful place back then. For a few happy months, I revelled in avant garde music and art and bell-bottom trousers. I got a job in a sandwich shop in Soho that warmed its roast beef sandwiches in something seriously avant garde called a microwave.

Then my parents announced, possibly because of their concern about my exposure to radioactivity, that we were moving on as a family. To Australia, as ten-pound poms. The high adventure of this came at exactly the right time. Dulling an insistent feeling I was starting to get that something was missing from my life.

In Sydney, the universe gave me hints. One afternoon in Pitt Street, on my way home from my job as a non-book-shop sales assistant, pondering that my shoulder-length hair wasn’t giving me the fulfilment I’d hoped it would, I was punched in the face by a local right-wing activist called The Skull. As I dropped to the pavement, I glimpsed something in his pocket. A paperback. Probably Mein Kampf, but still a book. Sadly, though, I didn’t take the hint. 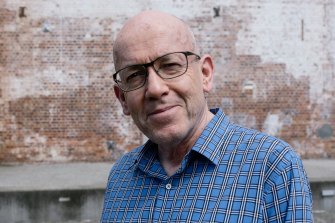 It was many more months before that happened. By then I was working as a general dogsbody in a clothing factory. A place where skilled tradespeople worked hard and fast, with no time for chat or cultural observations. The garments they assembled, one of the managers told me, were designed to make the wearer look good, regardless of what was going on underneath. I was pretty sure for her that wouldn’t have included my growing internal void of increasingly hard to deny literary loss, so I didn’t use my staff discount.

Then one day something happened that was so unexpected and so incongruous, that I probably wouldn’t have believed it if I’d seen it in a movie, or even read it under the bed covers.

During the tea break one of the cutters, a bloke who looked to a 17-year-old like he was quite old, say late 30s, came over to me and changed my life.

I don’t know his name, which is something I’ve always regretted. But I’ve never forgotten him. I can still see him at his cutting machine, surrounded by piles of expertly sculpted garment segments. And I can still see him walking towards me, mug of tea in his hand, holding something in his other hand that one didn’t often see in a hot noisy clothing factory in Sydney in 1970. A book.

And if that wasn’t unlikely enough, a literary novel. The Horse’s Mouth by Joyce Cary. A great underrated literary novel, I soon discovered, about a painter but also about the whole creative process. Exactly the right book to pull me back from the brink.

“Here,” he said. “Just finished this on the train to work. Thought you might like to give it a go.”

We didn’t know each other. I was a shy kid awed by him and the other workers. I stammered out some thanks. That day was the only time we exchanged more than two words.

How could he have known how much I needed that book, or how little I knew I needed it? Could he have sensed I was a reading refugee from a brutish secondary school with concussion on its curriculum? Did he know I’d lost my way?

All I know is I found my way again on the bus journey home that night, in the first few pages of Joyce Cary’s incandescent prose. I left the factory the next week and went searching for books.

Without them, and without you, dear workmate, I wouldn’t be an author. In the sad absence of your name and address, I’ve often conjured stories about you. Were you a frustrated writer or painter or sculptor yourself? Or were you merely that most important of literary figures, a reader?

I’ll never know. I don’t even know if you’re still around to read this, which is why I should have written this message to you a long time ago. I’ve thought it often, but here it is at last, in the medium with which you blessed me.

You showed me how minds change, and how kindness and insight achieve this noticeably better than airborne missiles. And you showed me how books are good at changing minds too. But only inside our hearts and our heads, not bouncing off them.

Morris Gleitzman is one of Australia’s most popular children’s authors whose latest book Always is out now.

He is a guest of the Sydney Writers’ Festival, whose theme this year is Change My Mind. The event runs from May 16 to 22.

A cultural guide to going out and loving your city. Sign up to our Culture Fix newsletter here.

To read more from Spectrum, visit our page here.