Sportsmen are so often denied the perfect ending but Jonny Brownlee was able to bow out in style on the biggest stage of all as he completed the full set of Olympic medals.

After the relative disappointment of the individual event, where Brownlee finished fifth, he played a key role in a dominant British performance in the triathlon mixed relay as he joined Jess Learmonth and individual silver medallists Georgia Taylor-Brown and Alex Yee in powering to victory at Odaiba Marine Park, live on Eurosport and discovery+ .

It was Brownlee’s second leg that proved decisive, after Learmonth had started strongly to keep GB in the front bunch.

On the transition between bike and run, Brownlee opened up a gap from his rivals, and he then left them in his wake to give Taylor-Brown a handy lead.

She and Yee completed the job as Team GB triathletes depart from these Games with three medals and a third Olympic gold, to establish themselves as the most successful nation in the history of the sport.

And for Brownlee, who has had to spend so long watching older brother Ali on the top step of the podium, it was the perfect way to call time on his Olympic career before he joins him in longer Ironman triathlons.

He said: “If someone had said at the start of my international career I’d have three Olympic medals and three different colours I’d have taken that. It’s super special.

“The way we all raced today was amazing. Jess set us up perfectly, we didn’t make any mistakes, we did everything as well as we could and Alex finished it off. To finally get a gold medal, I’m quite emotional.”

The 31-year-old is a level-headed individual with an insatiable drive – to the point that he intends to take just a few days off before getting back into training.

But he also has a superstitious side when it comes to his brother’s Olympic golds.

Now, at long last, he has one of his own.

Ali said of his brother: “I know for a long time that he’s wanted gold. And he never wanted to touch my medals. He thought it was bad luck. It’s awesome for him and I’m really happy.”

If the Brownlees have been the inspiration for a new generation of British triathletes, the latest crop have now written their own history.

At 23, Yee looks set to dominate the sport, and he showed incredible maturity here when he came under pressure on the anchor leg.

French world champion Vincent Luis put in a huge effort on the swim and particularly the bike, to catch Yee, who had started with a 21-second advantage.

The youngster did not panic at all though, backing his pace on the run to get the better of Luis who eventually faded into bronze as the Americans came through for silver. 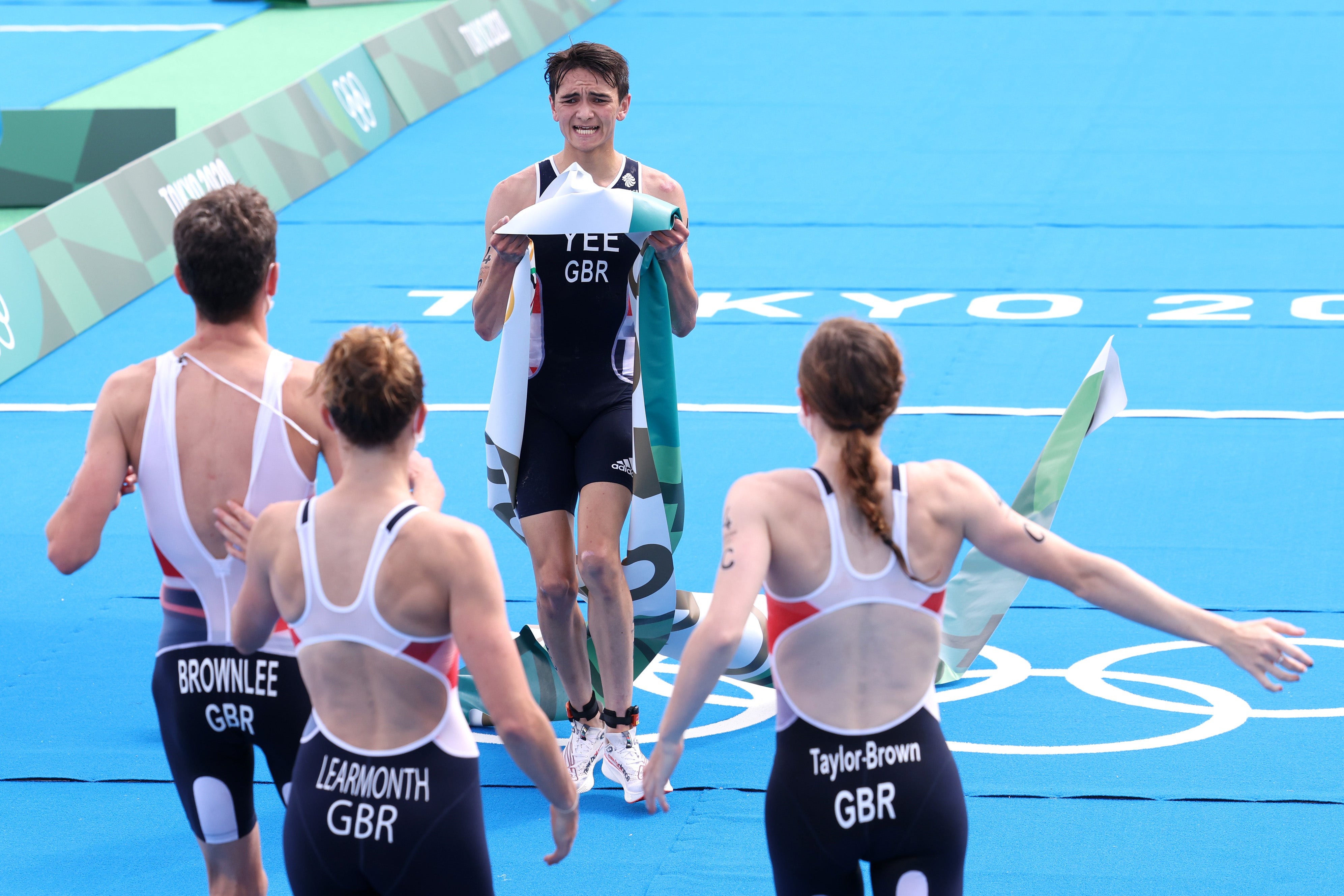 And Yee revealed afterwards that it was not just the Brownlees who had inspired him, with Luis having played a part in his development as a youngster.

Luis explained: “Back in 2012 I did my first Olympics and I was asked if I had any gear to give to a young guy that had just started the triathlon. I just learned that it was Alex.”

Yee continued: “I remember receiving a parcel from France and thinking it was really quite odd. But it was from Vince and he sent some of his Olympic kit. I was so young at the time and I remember thinking ‘wow, this is really amazing’. He is someone that inspired me so much. Vince is one of the people I look up to the most in the sport. It was pretty special. He’s just a legend.”

It was fitting therefore, that Luis was the person driving on Yee in the first-ever mixed triathlon relay at the Olympics.

However, Brownlee was right when he chose to single out Learmonth’s performance.

In a team where she was the only person without an Olympic medal to her name, the pressure was immense.

The 33-year-old knew that she would not necessarily have the speed of her rivals on the run but emptied herself for the cause and came home just two seconds off the lead.

Learmonth said: “I was slightly nervous. I think the relay you’ve got a lot more pressure than the individual. I’m not bothered if I do badly but I’d be very bothered if I messed it up for these guys especially when they’re medallists.

“I felt a bit of pressure but I just tried to be calm and enjoy and to be fair I really did enjoy it and it ended really well.”

It was a captivating debut for the mixed relay, unquestionably the most entertaining form of triathlon. And while the Brownlees may be done on the Olympic stage, the legacy they have left will live on.

Stream every unmissable moment of Olympic Games Tokyo 2020 live on discovery+, The Streaming Home of the Olympics.