Home » Lifestyle » Tones and I: From YouTube Busker to 'Dance Monkey' Hitmaker

Tones and I: From YouTube Busker to 'Dance Monkey' Hitmaker

You’ve probably heard at least a snippet of “Dance Monkey,” the billion-streamed hit from 2019 by Australian artist Tones and I. But when Toni Watson first heard that her song was becoming a global smash, she had one question: What is a music chart?

“I never knew there were music charts before I released my music [online],” she says. “I never looked at charts or anything. I just listened to the music that I liked.” 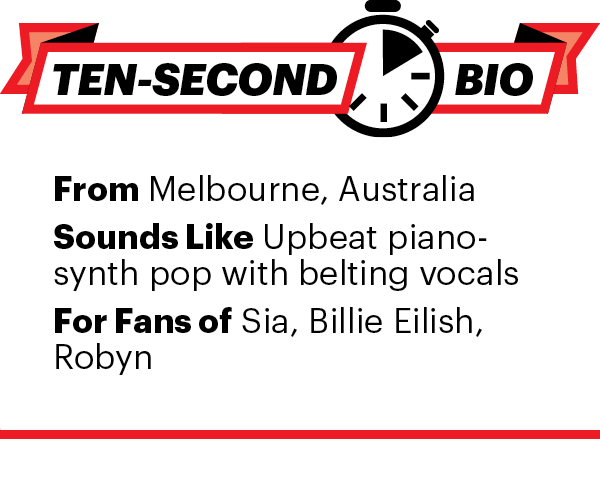 Tones’ unfamiliarity with the industry only makes her success story even more remarkable. A self-taught producer, the 26-year-old began making her own music while working retail and living week-to-week in Melbourne. She found a niche in combining piano melodies with electronic beats, a now-ubiquitous sound in pop music that she says she personally was drawn to after hearing the work of Macklemore and Ryan Lewis (“purely because of the concepts and ideas and how well they relate emotions”).

Tones learned how to sing on her own as well, often bypassing traditional methods of vocal training. Years later, when she finally took proper singing lessons and failed her scales, she recalls that her vocal coach told her that she simply didn’t have any range. “And then she was like, ‘Just play me a song on the piano,’” she says, “and I hit all the same notes in a different kind of voice.” It was that distinct voice — raspy yet belting, somewhat akin to that of fellow Australian vocalist Sia — that may have foreshadowed Tones’ winning streak.

'A Charlie Brown Christmas': The Making of a Classic Soundtrack

Tones gradually earned a following through busking around her city – she won a local Battle of the Buskers in 2017 – and posting a cappella videos to her YouTube channel. In February 2019, her debut single, “Johnny Run Away,” entered heavy rotation on Australia’s alternative stations.

“Dance Monkey,” an upbeat piano track characterized by Tones’ emotive performance, first gained legs as a popular track in her live shows. That it did so well on streaming and on services like Shazam came as a shock to Tones and her team. “You can really tell when you get video tags of people covering the song or dancing to it,” she says. “It’s just out of this world.”

Though she’s had to postpone her tour indefinitely due to the ongoing pandemic, Tones is hoping to bring her new live show — part concert, part autobiographical play about her early career — to fans around the world as soon as she can. “I’m going to leave no stone unturned,” she promises.