Outside China, it's the rich world that has so far borne the brunt of coronavirus. Spain and Italy are under siege, the streets of New York are deserted, and, in Australia, luxury cruise ships and a party among the private school set in Aspen have been the centres of the pandemic's spread.

But despite the inconvenience of working and schooling from home, the gripes about Victoria's short-lived "bonk ban" and quarantined ex-travellers complaining about the food in five-star hotels, Australia has been able to hunker down and self-isolate. 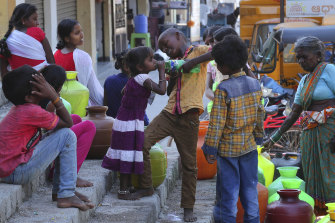 An Indian boy helps a girl to drink water as others wait to collect potable water from a public tap in a poor area of Hyderabad, India.Credit:AP

Then last week, a tweet from an Indian doctor went viral and provided some much-needed perspective on this fearsome disease: "Social distancing is a privilege," wrote Dr Jagadish J Hiremath. "It means you live in a house large enough to practise it.

Dr Hiremath runs a hospital in an industrial area of Bangalore, about 1000 kilometres from Mumbai. His words were a sobering reminder of the world’s structural inequalities.

And if well-off nations with solid health systems and economies have seen about 53,000 people die so far, when COVID-19 spreads in earnest to poorer countries, refugee camps, and informal settlements, it is likely to become deadlier still. Aid agencies, the United Nations and national governments across the developing world know that that day is approaching.

“It’s just a trickle at the moment, but based on what we’ve seen in places like Italy and New York we need to prepare for a tsunami.”

“High population density and inadequate housing conditions … mean that measures to prevent and respond to COVID-19, such as quarantine and social distancing, are simply not possible,” said World Vision International’s Global Director of Humanitarian Operations, Isabel Gomes, this week.

“Populations forced to live in such places will find it very difficult to protect themselves.”

In India, where Prime Minister Narendra Modi announced a 21-day nationwide shutdown on March 24, about one-sixth of the urban population live cheek-by-jowl in the country’s slums.

The largest of those communities is Dharavi in Mumbai, which recorded its first case of coronavirus on Wednesday. Here, there’s about one toilet for every 1400 residents, and around 100,000 makeshift homes, each with multiple residents under the one roof. The laneways are so narrow that neighbours can’t help but rub shoulders as they pass. Some labourers fled the cities and crushed onto buses and highways to go back to their home villages, probably carrying the virus to every corner of the country.

As Dr Hiremath told The Age and The Sydney Morning Herald last week, COVID-19 started in wealthier nations, but it “has now become a poor man’s burden to carry.” 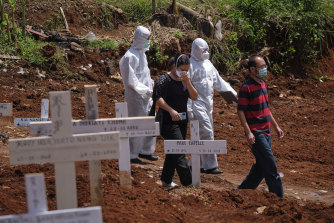 A family at the grave of their relative who died of coronavirus in one of the two official cemeteries for COVID-19 victims in Jakarta, Indonesia.Credit:Getty Images

Indonesia presents another cautionary tale. A few weeks ago, the world’s fourth most populous nation was yet to officially record a single case of coronavirus. By Friday morning there had been 1790 cases and 170 deaths – making the country the worst-affected nation in south-east Asia. Most of the deaths have been in the teeming capital, Jakarta.

While President Joko Widodo was initially slow to respond, his government has now imposed “large scale social restrictions” on its citizens including a nationwide work-from-home policy. But for now, there are no plans to stop “Lebaran” at the end of May, an annual migration of 20 million people from the cities to home villages all over the country to celebrate the Eid al-Fitr religious festival.

In any event, many Indonesians work in informal industries, earning a living as food vendors, domestic helpers, drivers – jobs where working from home is simply not feasible. For these daily wage earners, the choice is stark: risk hunger, or risk infection.

Motorcycle taxi “Gojek” driver Mohammad Feri Fadli told The Age and Herald he would continue working on the streets of Bali, but had noticed a 50 per cent drop in his income since the first case of COVID-19 in his country.

“I am scared of the virus too, but I brave it every day to go out,” said the father of two, who regularly sends money back to his family in Java. “My wife makes snacks and sells them online, but it’s so quiet lately she had to stop. What we eat, we earn each day. If I don’t bring money home, there will be nothing to eat tomorrow.”

Aid agencies also fear the catastrophic impact of COVID-19 sweeping into refugee camps, makeshift settlements and conflict zones. According to the United Nations refugee agency, more than 70 million people are living out of their homes, many in camps, due to conflict.

There, a lack of medical resources and pre-existing health conditions will make the pandemic even harder to fight. And for many communities in fragile nations, COVID-19 will exacerbate a range of child protection threats that are largely foreign in the west, such as child marriage and child slavery.

“It’s a humanitarian emergency writ large,” said Save the Children deputy chief executive Mat Tinkler. “It’s just a trickle at the moment, but based on what we’ve seen in places like Italy and New York we need to prepare for a tsunami.”

That preparation itself has been made difficult by the shutdowns that some governments and non-government groups are imposing on their staff. In the Pacific, Papua New Guinea has now gone into lockdown, and the Australian High Commission evacuated all non-essential staff last week. Private companies that usually assist in aid and development have also withdrawn workers. With fewer people, travel restrictions disrupting supply chains, and limited internet, the ability to “surge into hotspots” and respond to the virus is likely to be affected, says Tinkler.

One of the biggest, most densely packed refugee camps in the world is the Cox’s Bazar displacement camps in Bangladesh, where 859,000 refugees are living after fleeing Myanmar in 2017.

Thanks to a government crackdown, they have had no access to internet or cell phone data for more than six months, so have no means of obtaining reliable information about COVID-19. They do not know which hospitals could take them in, and which are already at capacity.

An epidemic in this environment could be catastrophic.

In Africa, all but five of the continent’s 54 countries now have cases of coronavirus. As the number of infections exceeded 6000 on Thursday, the head of Africa Centres for Disease Control Prevention, Dr John Nkengasong, warned that the continent was "very, very close" to where Europe was after a 40-day period.

In a small snapshot of the difficulties ahead, Cote d'Ivoire and Burkina Faso are already running out of hospital beds, armed conflict continues unabated in countries such as Nigeria and South Sudan and high rates of diabetes, HIV, other diseases will likely increase the risk of COVID-19 across the continent. 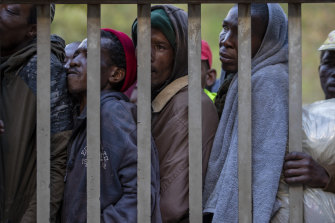 Homeless people queuing for a meal and a shelter in Hillbrow, Johannesburg, South Africa, during a nationwide lockdown.Credit:AP

Here too, social distancing and quarantine is often all but impossible. In Mozambique, for instance, it’s not uncommon for up to seven or eight family members to live under the one roof and walk several kilometres a day for basic water supplies. In Uganda and Ethiopia, about 82 percent of the population gather en masse for religious services. Church services in Australia are now streamed online but such a concept is not feasible in rural Africa.

“Health-care systems across Africa could collapse under the added weight of the pandemic,” says Patrick Youssef, the regional director for Africa at the International Committee of the Red Cross.

“In northern Mali, 93 per cent of health-care facilities have been completely destroyed – proof that hospitals, ambulances and medical personnel all too often become targets in armed conflict. The underfunded community health centres that are left already struggle to treat common illnesses like malaria and measles. How could we expect them to test and treat people for COVID-19?”

In a bid to deal with the looming catastrophe, international humanitarian agencies are ramping up their efforts in fragile nations despite their staff restrictions. World Vision has been distributing protection equipment and hygeine supplies in Asia since January and is now undertaking further work in countries such as Afghanistan, the Democratic Republic of Congo, Iraq, Haiti and Syria.

However, acting chief executive Graham Strong is under no illusions about the overwhelming challenge ahead, and the stark contrasts between developed nations and the third world when it comes to fighting the worst global pandemic in a century.

From the sanctuary of his Australian home, Strong has been watching in awe at the billions of dollars state and federal governments have pumped into job seeker payments, childcare, and hospital beds. He hopes, optimistically, that it doesn’t detract from the global effort to protect the most vulnerable.

“I’ve just been amazed in terms of watching what the Australian government is doing for Australians,” says Strong. “I think it’s great that we’re able to do that, but we have to realise that a lot of fragile states don’t have the ability to provide that for their citizens.”

In India, Dr Hiremathe knows that lockdowns have helped to flatten the curve. In his, country, though, “it is coming with a price”.

“I run a hospital in an industrial area of Bangalore,” he says. “Most of (the labourers) here are daily wage earners, and since the factories are shut down, they’re suffering from a loss of income.

“If proper arrangements are not made, we may soon see more people dying of hunger than COVID-19.”