Drugs could be designed to combat age-related illness and let humans live longer after researchers successfully ‘tweaked’ an anti-ageing enzyme in roundworms.

Researchers from KAIST (Korea Advanced Institute of Science and Technology) were able to dial up and down creatures’ lifespans by altering protein activity levels.

The enzyme ‘tweaked’ by researchers allows roundworms to convert sugar into energy when cellular energy is running low – the team found a way to ‘control it’.

Humans also have these proteins, offering up the possibilities of developing longevity-promoting drugs, according to the Korean researchers. 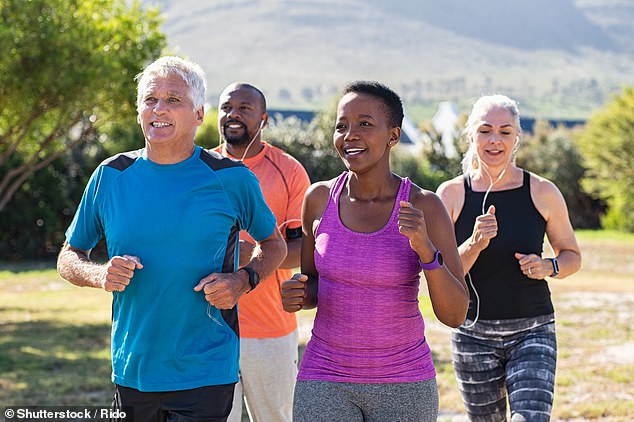 Humans also have these proteins, offering up the possibilities of developing longevity-promoting drugs, according to the Korean researchers

The roundworm Caenorhabditis elegans (C. elegans) is a fraction of an inch long nematode that is commonly used in lab testing.

It experienced a boost in its lifespan when researchers tinkered with a couple of proteins involved in monitoring the energy use by its cells.

The proteins VRK-1 and AMPK work in tandem in roundworm cells, with the former telling the latter to get to work by sticking a phosphate molecule, composed of one phosphorus and four oxygen atoms, on it.

AMPK’s role is to monitor energy levels in cells, when cellular energy is running low.

Using a range of different biological research tools, including introducing foreign genes into the worm, a group of researchers were able to dial up and down the activity of the gene that tells cells to produce the VRK-1 protein.

This gene has remained pretty much unchanged throughout evolution and most complex organisms have this same gene, including humans.

Lead author of the study Sangsoon Park and colleagues were able to successfully increase production of the VRK-1 protein and boost the roundworm lifespan.

They found that the activity of the VRK-1-to-AMPK monitoring process is increased when a creature is in low cellular energy status.

They specifically talk about reduced mitochondrial respiration – the reactions that use oxygen breathed in by the worm to convert nutrients from food into ‘energy currency’ the creature spends to do everything it needs to survive.

It is already known that mitochondria, the energy-producing engine rooms in cells, play a crucial role in ageing, and declines in the functioning of mitochondria are associated with age-related diseases.

At the same time, the mild inhibition of mitochondrial respiration has been shown to promote a longer life in a range of species, including flies and mammals.

When the research team performed similar tinkering with cultured human cells, they found they could also replicate this ramping up and down of the VRK-1-to-AMPK process that occurs in roundworms. 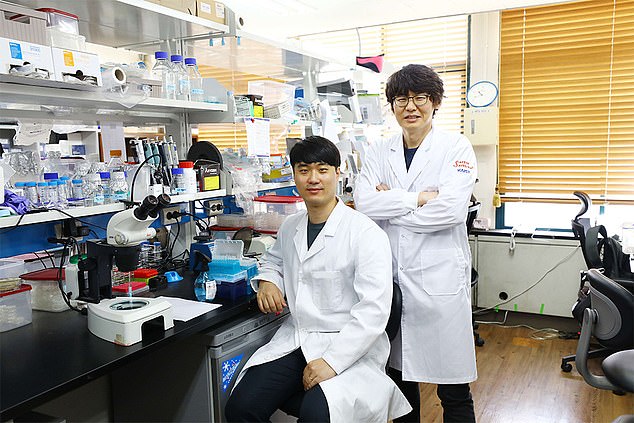 Sangsoon Park (left) and Professor Seung-Jae V. Lee (right). They found that the activity of the VRK-1-to-AMPK monitoring process is increased when a creature is in low cellular energy status

‘This raises the intriguing possibility that VRK-1 also functions as a factor in governing human longevity, and so perhaps we can start developing longevity-promoting drugs that alter the activity of VRK-1,’ explained Professor Lee.

At the very least, the research points us in an interesting direction for investigating new therapeutic strategies to combat metabolic disorders by targeting the modulation of VRK-1.

Metabolic disorders involve the disruption of chemical reactions in the body, including diseases of the mitochondria.

But before metabolic disorder therapeutics or longevity drugs can be contemplated by scientists, further research still needs to be carried out to better understand how VRK-1 works to activate AMPK, the team explained.

They said they also need to figure out the precise mechanics of how AMPK controls cellular energy.

The research has been published in the journal Science Advances.

Research reveals it is possible to slow down our biological, or ‘inner’, ageing process, which could help us to live decades beyond the current life expectancy of 81.

Drugs that interact with our DNA maintain the function of our bodies for longer, the research suggests.

Experts stress, however, this must be combined with a healthy lifestyle for full effect.

Yet, how a 120-year-old life expectancy may impact people’s quality of life is unclear.

The side effects of such treatments are also unknown.

Several European countries are in talks to start drug trials within the next three years.

Professor Vladimir Khavinson, head of the St. Petersburg Institute of Bioregulation and Gerontology, said: ‘It is important to understand that nobody would want to live a long and unhealthy life.

‘The main goal for us now must be to allow people to stay healthy for as long as possible into their old age.’

Six of these drugs are already available in Russia.

These include Thymalin to maintain immune system function and Cortexin to preserve brain activity.

The drugs work on the so-called ‘peptide technology theory’, which states that interacting with DNA increases protein production that prolongs lifespan.

Speaking at the international symposium on longevity in Geneva, Professor Khavinson added: ‘One of the key indicators of ageing is the reduction of protein synthesis.

‘We have come to the conclusion that it is possible to restore it to a normal level with the use of peptide bioregulators and have found an optimal way to maintain natural peptide production of a sufficient quantity.

‘The technology developed by our scientific institute is based on the extraction of peptides from the tissues of young healthy animals that have the same structure as human tissues.’

A similar study conducted by researchers at the GLMED medical center in Moscow assessed 60 age markers throughout such drugs’ treatment in participants aged 31-to-72 years old.

Results suggested that, when combined with a healthy lifestyle, the drugs reduce a person’s biological age by an average of up to two years over 12 months.