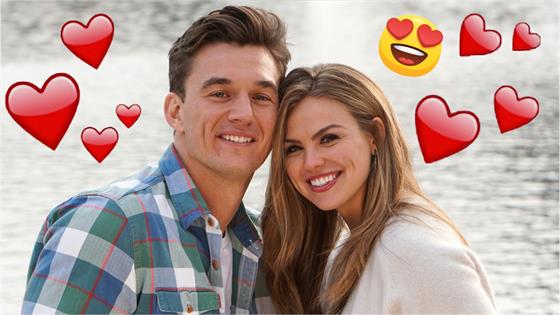 Tyler Cameron isn’t holding anything back.

While live-tweeting along to The Bachelor Presents: Listen to Your Heart‘s first episode, the 27-year-old was reminded of his time fighting for Hannah Brown‘s heart on The Bachelorette, giving Bachelor Nations fan a lot more than they bargained for.

In his hilarious tweet, Tyler recalled the nerves he would feel walking into the rose ceremonies, especially when he would watch the Dancing With The Stars champ’s pile of roses dwindle down.

“During rose ceremonies, my blind ass would be trying to count the roses and would come to like 20 roses… time passes 10 roses would be handed out and there would be 3 left. I would then proceed to shit my pants,” he shared, along with a GIF of a man spraying an air freshener in his bathroom.

Knowing that Tyler and Hannah shared a palpable chemistry, one fan responded, “Tyler acting like he was at the bottom of the rose pile,” and added a GIF of Justin Timberlake making a hilarious expression.

In the months following their time on the hit ABC show, Tyler and Hannah have rekindled their friendship and have sparked plenty of romance rumors along the way. Back in March, the former loves reunited in Florida and were spotted enjoying each other’s company at a local beach. Taking their friendship to social media, the duo have been treating fans to several hilarious TikTok videos with their “Quarantine Crew.”

At the time of their reunion, a source close to the stars told E! News, “They both have expressed they are not in a position to date right now but do care about each other. They have both been through a lot recently and are supporting each other through it.”

Tyler wasn’t the only one that caused a splash on Twitter while watching the Listen to Your Heart premiere. Like the Florida native, Hannah was also tuned in and joked that she was “triggered” by the show’s star Trevor Holmes. As the episode unfolded, fans couldn’t help but notice that Trevor and Bachelorette winner Jed Wyatt shared a lot of similarities. To start, both stars were aspiring country singers and appeared to have the same sense of style when it came to Sherpa-lined jackets.

Reminded of her rocky relationship with Jed, Hannah tweeted, “I’m triggered by this whole thing. @chrisbharrison #TheBachelorLTYH.” Tyler also chimed in and joked, “We’ve seen how this whole look turns out already…” Like his fellow Bachelorette alums, Jed also pointed out the irony of the situation. “Something about this new show feels familiar,” he tweeted. “Maybe it’s Trevor’s jacket, maybe it’s all the guitars. Stay tuned.”