UK halfway to net zero as emissions tumble 11% during lockdown

A dramatic 11% drop in greenhouse gas emissions during the coronavirus lockdown has put the UK halfway towards its target of becoming ‘net zero’ by 2050.

Climate and energy website Carbon Brief estimated the 11% drop in greenhouse gas emissions last year, saying it was the biggest annual fall in at least 30 years.

However, emissions ‘are likely to increase as the economy recovers,’ the group behind the new study warned, suggesting the drop would be short lived.

This highlights the challenge in ‘cutting carbon in areas such as transport and housing’ to meet the goal to end the UK’s contribution to climate change by 2050. 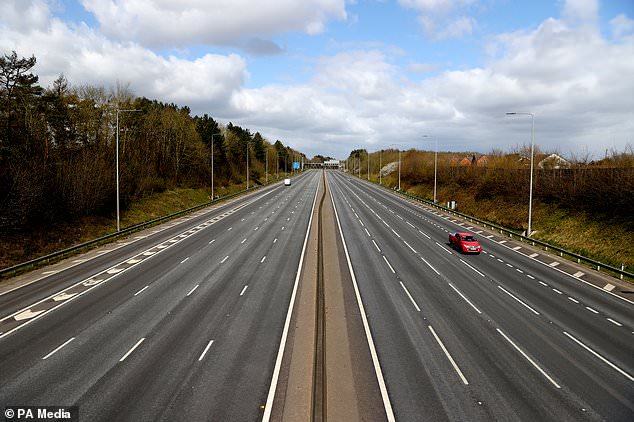 PARIS AGREEMENT: A GLOBAL ACCORD TO LIMIT AVERAGE TEMPERATURE RISES

The Paris Agreement, which was first signed in 2015, is an international agreement to limit climate change.

The Paris Agreement on Climate Change has four main goals with regards to reducing emissions:

To aim to limit the increase to 1.5°C, since this would significantly reduce risks and the impacts of climate change

Governments agreed on the need for global emissions to peak as soon as possible, recognising that this will take longer for developing countries

Carbon Brief says the significant reduction in 2020 means the UK has seen emissions fall 51% since 1990 – the benchmark year for measuring reductions.

This is base on laws aimed at measuring greenhouse gas reductions – that require cutting emissions to zero by 2050 – a 100% reduction on levels set in 1991.

By reducing emissions as much as possible and taking steps such as planting trees to offset any remaining pollution the country can meet the obligation, authors say.

Last year marked the halfway point in the 60-year period to achieve net zero, and the analysis shows emissions were down more than half, from 794 million tonnes of greenhouse gases in 1990 to 389 million tonnes in 2020.

But last year’s falls, which helped push UK emission cuts past the halfway point, were largely the result of lockdown reducing car use and gas-powered electricity.

Emissions will likely rise again in 2021 or 2022 as the economy recovers from the pandemic and people increasingly get back in their cars, Carbon Brief said.

In 2020 around 60% of the annual reduction came from lower oil use, mostly a reduction in petrol and diesel sales as lockdown took hold, costing the Treasury around £5 billion in lost fuel duty revenues, the analysis said.

While there may be an increase in home working after restrictions are lifted, that could be offset by nervousness over using public transport encouraging driving.

While electric vehicle sales now make up more than 10% of new cars, they only account for 1% of cars on the road, with a negligible impact on transport emissions which have dropped little in the 30 years since 1990.

But the analysis also shows the UK’s power sector has transformed in 30 years.

In 1990, two-thirds of electricity came from coal, 10% from oil and just 2% from renewables, but by 2020 the UK was generating more power from wind, solar, biomass and hydro than fossil fuels in 2020, with nearly half of days coal-free.

Industry has also cleaned up its act, with controls on landfill methane and other greenhouse gases, and more efficient industrial processes.

Carbon Brief say there has also been a structural shift away from carbon-intensive manufacturing in the British Isles which has contributed to reduced emissions.

Global CO2 emissions declined sharply in 2020, but with a rebound expected in 2021 efforts must be intensified if the world is to reach the targets of the Paris Climate Agreement

WHAT IS A CLIMATE EMERGENCY?

The climate emergency is ‘a situation in which urgent action is required to reduce or halt climate change and avoid potentially irreversible environmental damage resulting from it’, as defined by Oxford Dictionaries.

The term was declared the ‘word of the year’ by Oxford Dictionaries after its usage soared by over 10,000 per cent in 2019.

The UK declared a climate emergency for the national government and devolved administrations of Scotland and Wales in May 2019.

It was largely a symbolic move in recognition of urgency needed to combat the climate crisis.

The motion did not change the government’s legally binding targets under international accords.

Emissions of carbon dioxide, which makes up the lion’s share of greenhouse gas pollution, are now at their lowest level since 1879, the analysis shows.

Per person, UK greenhouse gas emissions are now as low as they were in 1853, and are roughly in line with the global average, making them lower than for each person in the US or China, though still three times that of India.

Chris Stark, chief executive of the UK’s advisory Climate Change Committee, said getting halfway to net zero is a story to celebrate.

Stark added that this shows the UK has outperformed many other similar economies.

He said there now needs to be a shift in focus from cleaner and greener electricity generation, which accounted for much of the progress to date.

‘Getting to net zero by 2050 means investing in zero-carbon replacements for the high-carbon assets we use every day. Our cars and vans, our gas boilers, plants and machinery in industry,’ he said.

Before the UK hosts international climate talks in Glasgow in November, ambitious plans are needed to decarbonise transport, make buildings less draughty, clean up industry and change how land is used, he said. 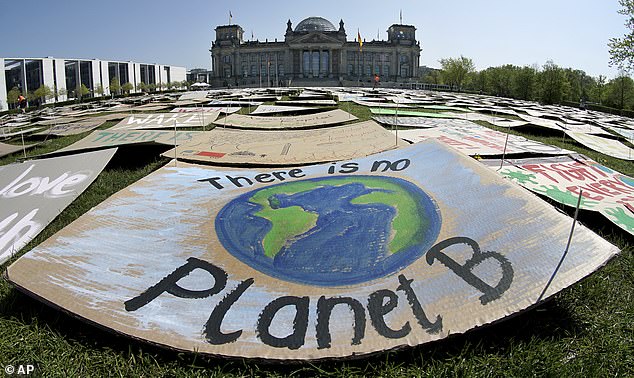 Photo from last year shows climate protest placards in front of the Reichstag building, home of the German federal parliament, in Berlin, Germany

But Greenpeace UK’s head of climate Kate Blagojevic warned the findings are not a cause for celebration as the UK is still a long way from reaching its commitments.

She said: ‘Make no mistake, the scale of necessary future emission cuts are far greater than anything that has been managed during the pandemic.

‘We need much more Government funding, policies and political will to cut emissions from our homes, cars, industry and agriculture if we are to meet our climate targets once normal life resumes.’

Carbon Brief’s estimates of the UK’s greenhouse gas emissions in 2020 are based on analysis of provisional energy use published by the UK government last month.

They cover domestic emissions but not those associated with imported goods or international aviation or shipping.

Revealed: MailOnline dissects the impact greenhouse gases have on the planet – and what is being done to stop air pollution

Carbon dioxide (CO2) is one of the biggest contributors to global warming. After the gas is released into the atmosphere it stays there, making it difficult for heat to escape – and warming up the planet in the process.

It is primarily released from burning fossil fuels such as coal, oil and gas, as well as cement production.

The average monthly concentration of CO2 in the Earth’s atmosphere, as of April 2019, is 413 parts per million (ppm). Before the Industrial Revolution, the concentration was just 280 ppm.

CO2 concentration has fluctuated over the last 800,000 years between 180 to 280ppm, but has been vastly accelerated by pollution caused by humans.

The gas nitrogen dioxide (NO2) comes from burning fossil fuels, car exhaust emissions and the use of nitrogen-based fertilisers used in agriculture.

Although there is far less NO2 in the atmosphere than CO2, it is between 200 and 300 times more effective at trapping heat.

Sulfur dioxide (SO2) also primarily comes from fossil fuel burning, but can also be released from car exhausts.

SO2 can react with water, oxygen and other chemicals in the atmosphere to cause acid rain.

What is particulate matter?

Particulate matter refers to tiny parts of solids or liquid materials in the air.

Some are visible, such as dust, whereas others cannot be seen by the naked eye.

Materials such as metals, microplastics, soil and chemicals can be in particulate matter.

Particulate matter (or PM) is described in micrometres. The two main ones mentioned in reports and studies are PM10 (less than 10 micrometres) and PM2.5 (less than 2.5 micrometres).

Scientists measure the rate of particulates in the air by cubic metre.

Particulate matter is sent into the air by a number of processes including burning fossil fuels, driving cars and steel making.

Why are particulates dangerous?

Particulates are dangerous because those less than 10 micrometres in diameter can get deep into your lungs, or even pass into your bloodstream. Particulates are found in higher concentrations in urban areas, particularly along main roads.

What sort of health problems can pollution cause?

According to the World Health Organization, a third of deaths from stroke, lung cancer and heart disease can be linked to air pollution.

Some of the effects of air pollution on the body are not understood, but pollution may increase inflammation which narrows the arteries leading to heart attacks or strokes.

As well as this, almost one in 10 lung cancer cases in the UK are caused by air pollution.

Around seven million people die prematurely because of air pollution every year. Pollution can cause a number of issues including asthma attacks, strokes, various cancers and cardiovascular problems.

Air pollution can cause problems for asthma sufferers for a number of reasons. Pollutants in traffic fumes can irritate the airways, and particulates can get into your lungs and throat and make these areas inflamed.

Women exposed to air pollution before getting pregnant are nearly 20 per cent more likely to have babies with birth defects, research suggested in January 2018.

Living within 3.1 miles (5km) of a highly-polluted area one month before conceiving makes women more likely to give birth to babies with defects such as cleft palates or lips, a study by University of Cincinnati found.

For every 0.01mg/m3 increase in fine air particles, birth defects rise by 19 per cent, the research adds.

What is being done to tackle air pollution?

The Paris Agreement, which was first signed in 2015, is an international agreement to control and limit climate change.

It hopes to hold the increase in the global average temperature to below 2°C (3.6ºF) ‘and to pursue efforts to limit the temperature increase to 1.5°C (2.7°F)’.

The UK government has announced plans to make the country carbon neutral by 2050.

They plan to do this by planting more trees and by installing ‘carbon capture’ technology at the source of the pollution.

Some critics are worried that this first option will be used by the government to export its carbon offsetting to other countries.

International carbon credits let nations continue emitting carbon while paying for trees to be planted elsewhere, balancing out their emissions.

No new petrol or diesel vehicles by 2040

In 2017, the UK government announced the sale of new petrol and diesel cars would be banned by 2040.

However,  MPs on the climate change committee have urged the government to bring the ban forward to 2030, as by then they will have an equivalent range and price.

The Paris Agreement, which was first signed in 2015, is an international agreement to control and limit climate change. Pictured: air pollution over Paris in 2019.

The speedy electrification of Norway’s automotive fleet is attributed mainly to generous state subsidies. Electric cars are almost entirely exempt from the heavy taxes imposed on petrol and diesel cars, which makes them competitively priced.

Criticisms of inaction on climate change

The Committee on Climate Change (CCC) has said there is a ‘shocking’ lack of Government preparation for the risks to the country from climate change.

The committee assessed 33 areas where the risks of climate change had to be addressed – from flood resilience of properties to impacts on farmland and supply chains – and found no real progress in any of them.

The UK is not prepared for 2°C of warming, the level at which countries have pledged to curb temperature rises, let alone a 4°C rise, which is possible if greenhouse gases are not cut globally, the committee said.

It added that cities need more green spaces to stop the urban ‘heat island’ effect, and to prevent floods by soaking up heavy rainfall.