Home » Lifestyle » University fees are changing. How will it affect you?

University fees are changing. How will it affect you?

The federal government’s changes to tertiary funding will increase the cost of many degrees while other courses will be cheaper. How will the changes affect you?

As year 12 exam season kicks off around Australia, thousands of students will be weighing up their options for university next year.

The federal government has recently made significant changes to the way it funds universities to teach domestic students, in the hope that the changes will encourage more students to study certain fields where there are more job opportunities. From January 1, the cost of some degrees will dramatically increase while others will be cheaper – and some won’t change much at all.

The changes were preceded by months of debate among universities, higher education experts and politicians, culminating in a stoush in the Senate where Labor, the Greens, and some crossbench members opposed them. Ultimately, the changes passed by just a single vote after the government secured the support of One Nation and Centre Alliance.

But this was not before Tasmanian senator Jacqui Lambie captured the spotlight with an emotional speech on the Senate floor, saying the changes would make university life harder for disadvantaged kids and their parents. “I'll be damned if I'll vote to tell those kids in those rural and regional areas of Tasmania that they deserve to have their opportunities suffocated in a way they'll never even know,” she said.

Meanwhile, the fee changes have outraged student groups, prompting a string of co-ordinated protests at campuses across Australia.

So, what are the changes? Why have they been introduced now? And will they work?

I plan to go to university. Will my degree cost more?

Here are the changes:

Fees for humanities and communications subjects will rise by 113 per cent. Law, commerce, economics will increase by 28 per cent. A full four-year program in these disciplines will cost students about $58,000.

Degrees in teaching, nursing, clinical psychology, English and languages will become up to 42 per cent cheaper. For example, a three-year nursing degree will cost $11,850, down from $20,412. 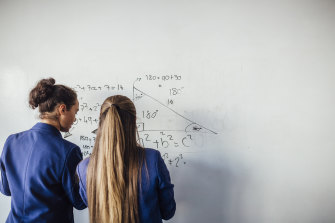 The funding changes are aimed at making certain courses more attractive for school-leavers.Credit:istock

I’m already at university. Will my fees change?

It depends. If you are studying a degree where courses fees are set to increase – such as law – the changes will not apply to you. This is because the government decided to “grandfather” the fee changes so that current students are not worse off as a result of the changes. However, students part-way through degrees where the courses will become cheaper, such as nursing and engineering, will benefit from the lower fees.

The government says the new funding model will result in lower or unchanged fees for 60 per cent of students.

Exactly how will these changes work?

In Australia, university students are charged fees for each unit (also called courses or subjects) they study, rather than the overall degree. Each semester, students receive a statement telling them how much they owe, although most elect to defer these fees through the Higher Education Loan Program (HELP).

Some subjects have higher tuition fees than others. Exactly how much a degree will cost will depend on which subjects a student chooses to study across the course of their degree.

Most domestic students enrolled in bachelor degrees at Australia's 37 public universities have a “Commonwealth Supported Place”. This means the Australian government subsidises the cost of the course, leaving students to pay the balance.

How did the reforms come about?

The fee changes were the centrepiece of a package of reforms dubbed the "Job Ready Graduates" reforms, announced by federal Education Minister Dan Tehan in June. He said the changes would produce “job ready” graduates by cutting fees for courses where the government predicts there will be a future demand for jobs and increasing student fees for courses where there is an oversupply of graduates.

The rationale underpinning this plan is that students will be incentivised to study the cheaper degrees, thereby producing more graduates in fields where they are needed – science, technology, engineering and mathematics (STEM) as well as teaching and nursing.

From next year, students will have a choice. Their degree will be cheaper if they choose to study in areas where there is expected growth in job opportunities.

Tehan said government projections prepared before the COVID-19 pandemic showed that over the five years to 2024 almost half of all new jobs would go to someone with a bachelor or higher qualification. Health care, science and technology, education and construction were expected to provide 62 per cent of total employment growth over the next five years.

Tehan laid out this vision in these terms: “From next year, students will have a choice. Their degree will be cheaper if they choose to study in areas where there is expected growth in job opportunities.

“To deliver cheaper degrees in areas of expected employment growth, students who choose to study more popular degrees will make a higher contribution.” 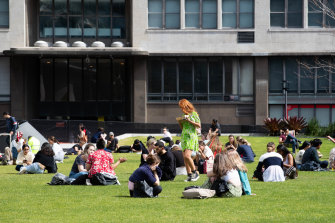 Students at the University of Technology, Sydney. The government says the fee changes will fund up to 100,000 places by 2030.Credit:Janie Barrett

What do the universities think?

There is no single unanimous view. This was partly because the reform package contained multiple elements, some of which were very appealing to some universities.

For example, regional universities have largely endorsed the package because it contains a number of sweeteners for their institutions. The most significant of these was a government commitment to increase their funding by 3.5 per cent to enable them to offer extra student places.

Most universities expressed at least some concern with the fee hikes but, on the whole, the sector was restrained in its criticism of the changes.

There was a prevailing view among universities that a fight with the government would only delay much-needed funding certainty while resistance could provoke a worse funding outcome.

The peak body Universities Australia ultimately conceded that even without amendments the Parliament should support the changes.

"What we need is some sort of stability and funding and policy certainty and the passage of the bill would equate with that,” chief executive Catriona Jackson told a Senate inquiry set up to assess the merits of the Job Ready Graduates bill.

The University of Sydney was the exception. It vehemently and publicly opposed the reforms, especially the fee changes.

Vice-chancellor Michael Spence said the changes would be “bad for future students and bad for the nation".

"For example, it punishes students for choosing to study the social sciences and humanities, when the best research suggests that a broad education, and many of the core skills that these disciplines offer, will most future-proof our students with the skills in critical thinking, problem-solving and effective oral and written communication that will be most transferable to the jobs of the Fourth Industrial Revolution, especially if they can be combined with training in fields such as data science, as they can at most Australian universities." 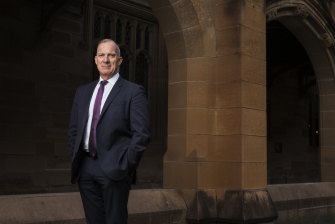 Whether or not the reforms will actually result in more students studying STEM, teaching or nursing degrees is hotly contested.

University of Melbourne higher education expert Mark Warburton says there is scant evidence that students pay attention to price signals when choosing what to study.

“Governments have done this sort of thing for the past three decades and there is little evidence that it has ever worked,” he says.

This view was echoed by economist Bruce Chapman, architect of the HECS-HELP system, who says the ability of students to defer their fees through loans blunts the impact of price on decision-making.

“And that was kind of the plan. It was to have a system where the payments would not affect behaviour,” Professor Chapman said earlier this year.

Students predominantly influenced by personal interest are likely to enrol in a course they find personally satisfying or rewarding regardless of cost.

The Department of Education points to the example of fee decreases for maths and science courses in 2009, which were followed by a 14 per cent spike in enrolments.

But in a submission to the Senate inquiry, it concedes that price is only one factor influencing a student's choice of course. Parent and peer aspirations are another factor, it says, citing a Longitudinal Survey of Australian Youth – and so is personal interest.

"Students predominantly influenced by personal interest are likely to enrol in a course they find personally satisfying or rewarding regardless of cost. Aspiration or career motivations also play a significant role in choosing a course of study."