Luxembourgish actress Vicky Krieps has kept a bit quiet since “Phantom Thread,” stepping back after her star turn in the 2017 fashion film thrust her to global stardom.

But here in Cannes, where she is presenting Mia Hansen-Love’s “Bergman Island,” an enchanting muse on the nature of art and fame, Krieps is quietly contemplating those concepts herself.

The film deals with the impostor syndrome and issues of identity that many women struggle with. Although it was shot two years pre-pandemic, Krieps had time to reflect during the quarantine downtime. “Am I defined by just being me or am I defined by interacting, by people telling me I’m beautiful or intelligent or hard working?” she considers. As an actress, much of her career is critique and feedback. “We define ourselves by people defining us, but for a year we had only ourselves and a mirror.”

On the red carpet, Krieps kept her couture casual with an embroidered lace blouse from Maison Lemarié and fuchsia pink lace skirt. The outfit, cool for a Cannes premiere, was created in collaboration with Chanel. “Having a stylist was something I couldn’t come up with, especially after COVID-19 and not having any premieres, so knowing that I could work with Chanel helps me feel surrounded, protected,” she said of returning to the red carpet.

All the Looks at the 2021 Cannes Film Festival

The actress has had a special relationship with the house since Karl Lagerfeld sent her a handwritten note amid the sudden-fame frenzy of “Phantom Thread.” She was deluged with invitations from fashion shows but wary of the front row, until Lagerfeld’s letter. In it he said he didn’t even bother with modern movies anymore, but was shown the film by a friend. He was so taken with her role he invited her to Paris. “I thought, ‘This is an artist inviting another artist to see his work because he liked my work, and it changed by my train of thought,” she remembered. After the show she was ushered backstage to meet Lagerfeld.

“This man did something no one had done. He just took my hand and looked deep into my eyes. He was very serious, he was not laughing or smiling at all and not making it easy for me. I don’t remember the exact wording but it was, ‘I saw what you do and it’s good but now you have to continue.’ The message was clear, you have a duty to carry that on and to continue doing it well. You cannot let this thing go.”

Was it encouraging or intimidating to be talking to such a legend? “It was relieving in a way, because it was honest. He was not going to smile and say, ‘Oh my god, you’re so amazing,’ because he knows it’s work. It was the most concrete and real thing anyone had said to me,” she shared.

And so she found herself sitting front row and applying the knowledge that she learned on the set of “Phantom Thread” to assess the outfits. “It was the best way to get to know a brand because it was kind of freeing. I was watching how the clothes would move and I think it was a very different approach.” 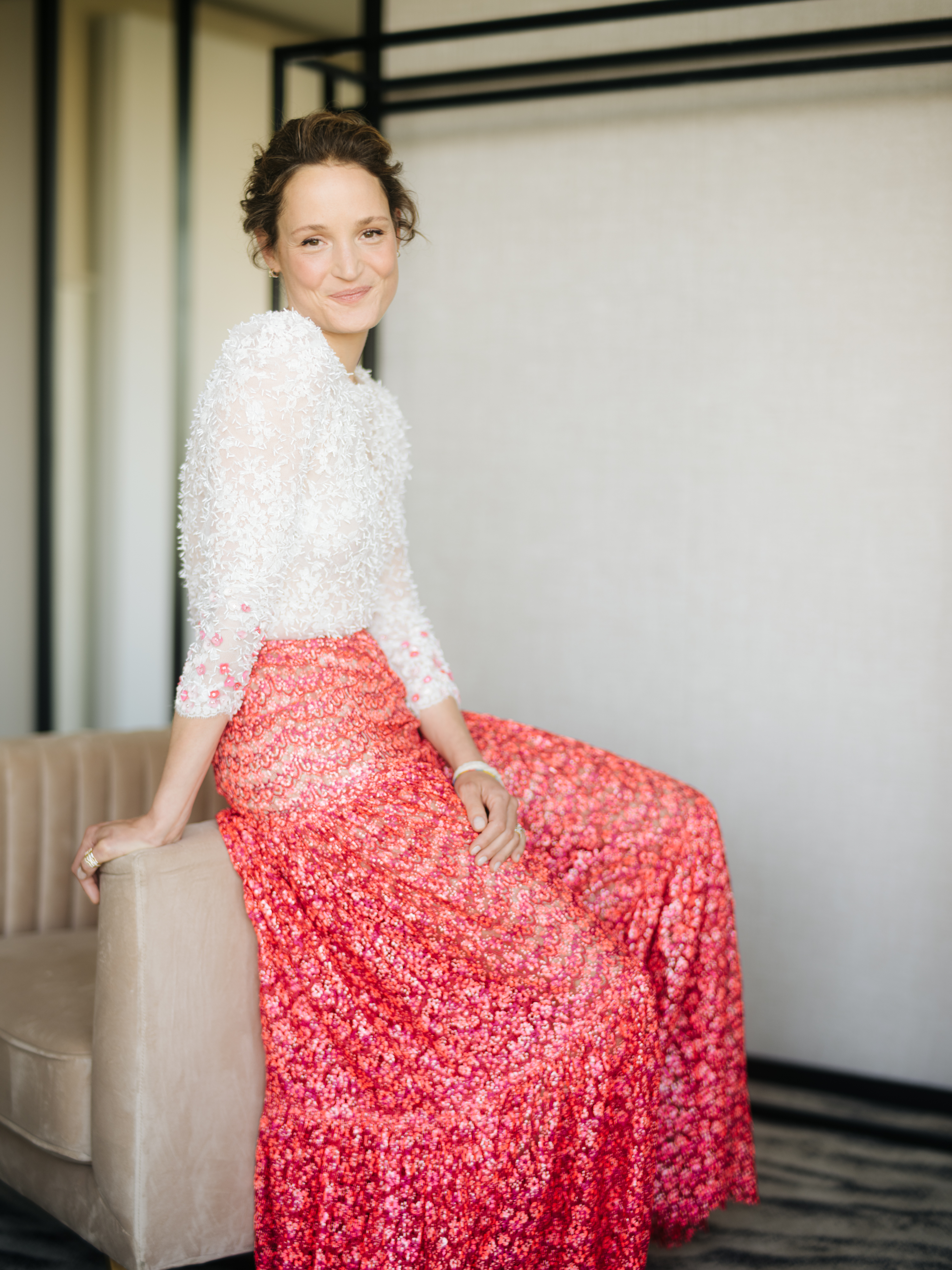 Vicky Krieps in Chanel ahead of the “Bergman Island” premiere. @virgile.guinard

After “Phantom Thread,” she avoided having an American agent for two years in order to stay away from the spotlight. Now, she has one foot in Hollywood and the other still planted in European indie cinema. It’s a balancing act. In Cannes, she was fresh from an online junket to promote Shyamalan’s “Old” just ahead of its U.S. release, and she just wrapped “Corsage,” a period film about Empress Elisabeth of Austria better known as Sisi in Vienna.

Fashion — and lack thereof — plays a role in both of the films. In “Old,” set on a beach, she spends much of her time in a bikini. “I was nervous in a different way — that there was nothing to hold on to.” But in the period piece “Corsage,” it was all corsets and gowns. The corset required her to whittle her waist down to 40 centimeters, smaller than her 10-year-old daughter. The experience was mind-altering.

“It was such an unsettling and uncomfortable feeling,” she said. Although it helped her get into character, the routine took an emotional toll.

“The thing I observed as soon as I had it on — and it would happen every day — is that after two minutes I would get sad. Like a deep sadness. And I found out that your emotional center is where your solar plexus and diaphragm is, and that is exactly where it is pushing the most. It affects your mood,” she said. “It made me think of all these women they would call difficult or hysterical. Why is no one ever talking about this instrument that was clearly torturing these women?”

So coming to Cannes fresh off the “Corsage” shoot was freeing, like a deep breath of fresh air. “It is nice to get back to life. It feels like a present, a gift that has been given to me,” she says. “The meaning [of “Bergman Island”] is beautiful, and after the last year of asking myself these questions — who I am as a woman, who I am as a mother, who I am in my work, as an actress, who I am in my private life, as Vicky? Who are all these women? And it’s all me.”