Zoom gloom: Rise of video calls that force people to regularly stare at their own faces has led to record numbers seeking plastic surgery, study finds

A record number of people are seeking cosmetic surgery after being forced to stare at their own face during video calls on services like Zoom, a study has suggested.

Surgeons from the US have noted that more patients are citing their perceived appearance on video calls as reasons for their dissatisfaction with their bodies.

Noses and wrinkles seem to be the most common complaints generated by this phenomenon, which the experts have dubbed ‘Zoom Dysmorphia’.

In addition, they noted, this year in lockdown has seen an increase in Google search trends for treatments for such conditions as acne, hair loss and wrinkles.

The team have warned that video calls can distort people’s appearance from how they really look — creating the illusion of a wider face and a broader nose.

Insecurity over appearance is linked to anxiety and depression — conditions felt more severely amid lockdown — which can lead to a negative feedback spiral.

Last year, before COVID-19, a study found that 72 per cent of cosmetic surgery patients were seeking procedures to improve their selfies. 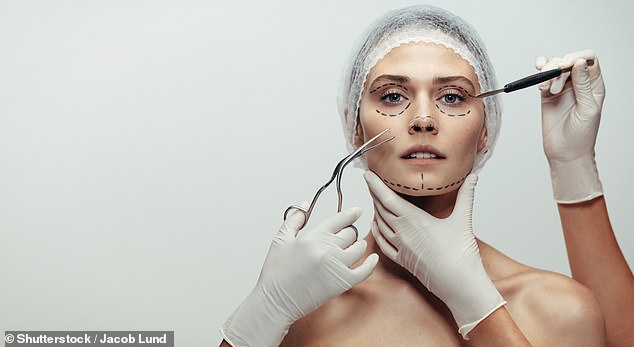 A record number of people are seeking cosmetic surgery after being forced to stare at their own face during video calls on services like Zoom, a study has suggested (stock image

This, she added, can cause ‘people to rush to their physicians for treatments they may not have considered before months confronting a video screen — a new phenomenon of “Zoom Dysmorphia”.’

‘One study found that a portrait taken from 12 inches away increases perceived nose size by 30 percent when compared with that taken at five feet.’

‘It is important for patients to recognise the limitations of webcams and understand that they are, at best, a flawed representation of reality.’

‘Perhaps there is a recent surge in patients seeking cosmetic procedures simply because they now see their imperfections on camera daily,’ Dr Shadi Koroush added.

‘The theory in the context of Zoom is particularly interesting, as the patient is also the viewer.’

‘They may perceive themselves as sad because of the wrinkles they see, which further negatively affects their emotions, leading to a dangerous cycle of self-deprecation.’

‘This becomes a major concern when an individual becomes excessively preoccupied with real or imagined defects.’ 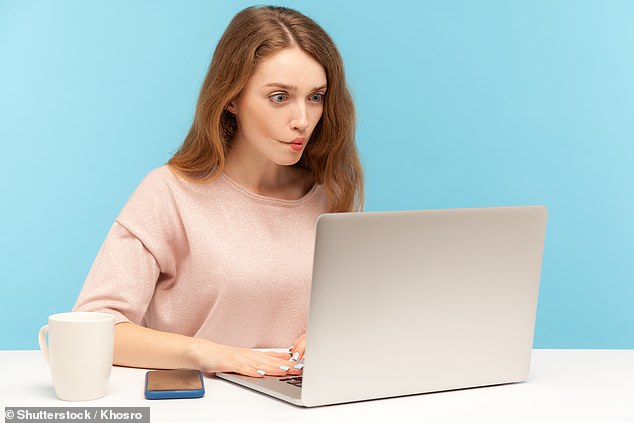 ‘The COVID-19 pandemic has radically changed the frequency with which we are confronted with our own image,’ said plastic surgeon Benjamin Marcus of University of Wisconsin Hospitals and Clinics, who was not involved in the present study.

‘The shift to online work, learning and even socialising has dramatically increased the time we have to observe ourselves.’

‘It has always been incumbent on surgeons to understand the motivations that are driving individuals to seek plastic surgery,’ added facial and reconstructive surgery expert Travis Tollefson of the University of California, Davis.

This, he explained, allows the doctors ‘to assure realistic goals that allow for successful surgeries.’

‘Now, more than ever, unique circumstances can be driving patient expectations that we should be taking into consideration.’

The full findings of the study were published in the journal Facial Plastic Surgery & Aesthetic Medicine.

A facelift, or rhytidectomy, is cosmetic surgery that lifts up and pulls back the skin to make it look tighter and smoother.

It is designed to reduce sagging skin around the neck and jowls.

In the UK, costs vary from clinic-to-clinic from a few thousand pounds for a mini facelift to £10,000 for a face and neck operation.

All independent and hospital clinics that carry out the procedure in England must be registered with the Care Quality Commission, which publishes inspection and performance reports.

Facelifts are normally performed under a general anaesthetic, but can sometimes be local.

They often involve making cuts above the hairline at the temples, as well as under the chin.

The operation lasts around three hours, with most patients having to stay in hospital over night.

It takes around two-to-four weeks to recover from a facelift, with patients being unable to work.

It could take up to six-to-nine months to see the effects.

Common side effects include a puffy face, bruising, scars and a raised hairline.

The procedure carries the risk of blood collecting under the skin, nerve injury, hair loss, thick scars and asymmetrical features.

As with all operations, it can also cause excessive bleeding, blood clots, infection and allergic reaction to the anaesthetic.

Figures show there were 5,600 facelifts carried out in the UK in 2012. It is unclear how many deaths are recorded from the procedure each year but the British Association of Aesthetic Plastic Surgeons warns death is possible.