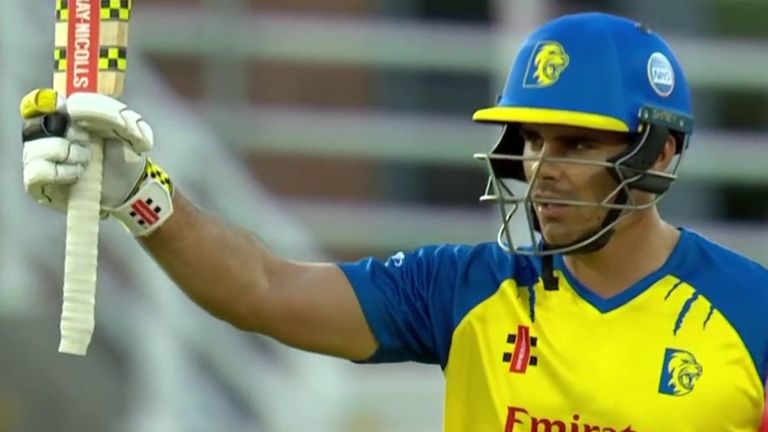 In-form David Bedingham struck a blistering fifty as Durham got back to winning ways in the Vitality Blast with an emphatic six-wicket win over Lancashire at Emirates Riverside.

Bedingham scored his second successive T20 fifty as the hosts chased down a total of 152 with 14 balls to spare to secure their third win in four matches in the competition. Scorecard: Durham vs Lancashire

Liam Livingstone had scored 65 for the visitors after they opted to bat, but the rest of the Lightning outfit struggled, including Jos Buttler who was dismissed for a duck.

Opener Bedingham struck three sixes and four fours and put on 76 for the first wicket with Graham Clark (26 off 18) to get Durham well ahead of the rate – a position they maintained despite Matt Parkinson’s 2-30.

Northamptonshire Steelbacks slipped to a fourth straight defeat as Derbyshire Falcons ended a two-game losing streak with a five-wicket victory in the North Group match at Derby. Scorecard: Derbyshire vs Northamptonshire

A disciplined Derbyshire performance with the ball restricted Northamptonshire to 141-8 and the Falcons, led by an unbeaten 48 from Leus Du Plooy and 44 from Matt Critchley, eased to their target with 10 balls to spare.

Ricardo Vasconcelos scored 38 and Graeme White made 37 from 24 balls but Northamptonshire were restricted by George Scrimshaw’s 1-13 from four overs and a spell of 2-23 from Conor McKerr.

Ian Cockbain hit his first half-century of this year’s Vitality Blast to earn Gloucestershire a narrow win over Middlesex after rain at Radlett prevented a nail-biting finish. Scorecard: Middlesex vs Gloucestershire

Cockbain and Ryan Higgins, who top-edged the final ball of the 18th over from Steven Finn for six, did just enough to edge their side ahead by two runs under Duckworth-Lewis-Stern calculations.

Until then, Gloucestershire had been behind the rate, but Cockbain, who finished on 62 not out from 39 balls, tilted the contest in their favour, reaching 157 for five when a downpour halted play.

Middlesex had posted 179 for five after being put in, built around Joe Cracknell’s 41-ball innings of 67 – the youngster’s second successive half-century.

Surrey and Sussex Sharks remain unbeaten in the Vitality Blast after their South Group showdown at the Kia Oval was abandoned because of rain. Scorecard: Surrey vs Sussex

After the start was delayed for 20 minutes, Surrey reached 53-2 from five overs having been put in before rain forced the players off again.

There was no improvement in conditions, to the disappointment of a crowd of around 4,000 who had come to see the top two in action, and umpires Russell Warren and Ben Debenham called the game off at 8.10pm, both sides taking one point.

Opener Will Jacks did provide some entertainment in the play that was possible, smashing 38 off 18 balls including 26 during a blistering assault on left-armer Tymal Mills in the third over.