Wales vs Denmark LIVE: The knockout-phase of Euro 2020 begins with a brilliant showdown in Amsterdam as Gareth Bale and Co look to match their 2016 exploits against an inspired Danish side – follow all the action here

The knockout-phase of Euro 2020 kicks off with Wales facing Denmark in the last-16 at the Johan Cruyff Arena in Amsterdam.

The Welsh came second in Group A and Rob Page’s side – led by talismanic skipper Gareth Bale – will be looking to match their 2016 exploits, when they reached the semi-finals of the Euros.

Denmark, meanwhile, have become the continent’s favourite team after progressing in emotional circumstances following Christian Eriksen’s cardiac arrest on the opening weekend – they will be cheered on by legions of fans making the trip to the Netherlands.

Sportsmail will provide live coverage of Wales vs Denmark at Euro 2020, including all the build-up team news and in-game updates.

Ball is whipped in from the free-kick and the ball bobbles around and is put behind for a corner.

Dan James takes the corner-kick but it comes to nothing as Denmark clear.

A very good chance for an attack for Wales but Dan James is unable to take it on.

The ball is fed through to him but he can’t quite get onto it and the ball goes out for a throw in.

If the pass had come off then it would have been tough for Christenson to keep up with James.

Not long after Ramsey wins a free-kick for a challenge by Delaney.

Chris Mepham was called into immediate action having to put the ball out for a throw in after a long ball was fed forward to Martin Braithwaite.

Wales kick us off and away we go!

Gareth Bale leads out Wales before Simon Kjaer leads out their opponents and it’s time for the national anthems. 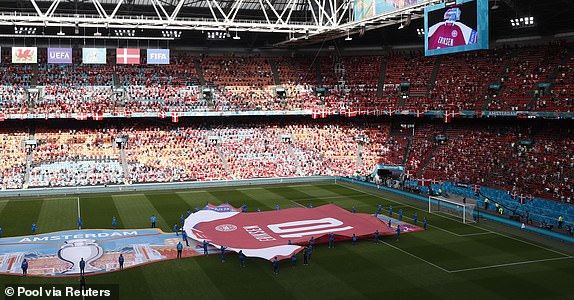 We are less than ten minutes away from kick-off and the start of the knockout phase of the European Championships.

Hopefully we have got a cracker in store! 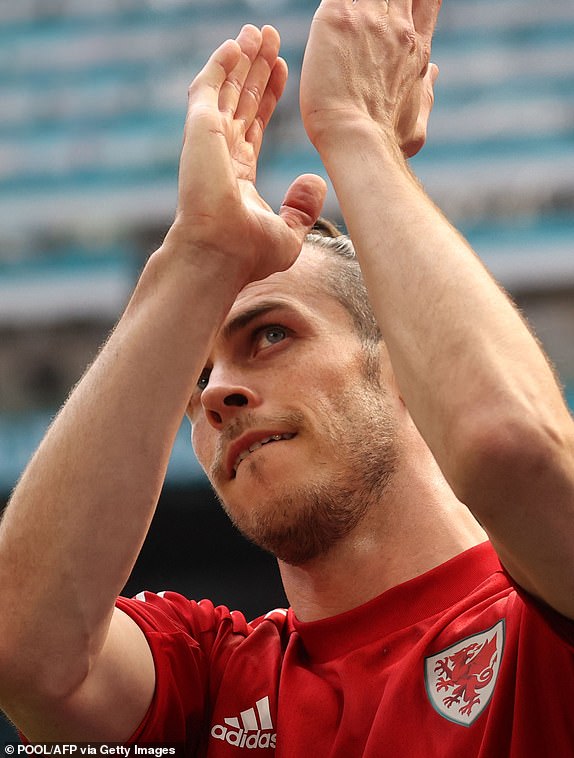 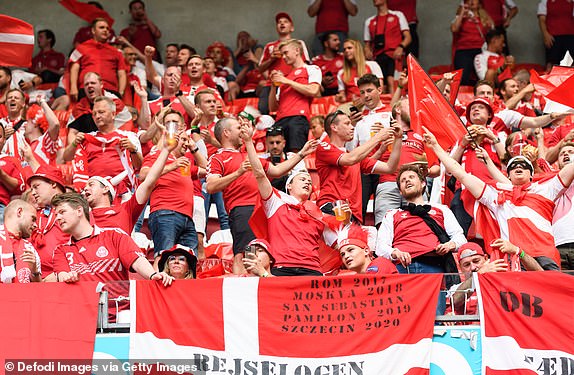 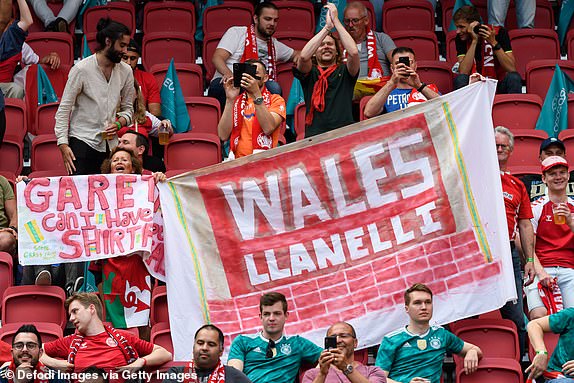 Turning back time, today is 29 years ago since Denmark shocked the world to win the European Championships by beating Germany in 1992.

It was a tournament they weren’t even supposed to be in originally until they were a last-minute replacement for Yugoslavia.

How the Danish fans would love to see a victory today and go on another miraculous run through this tournament. 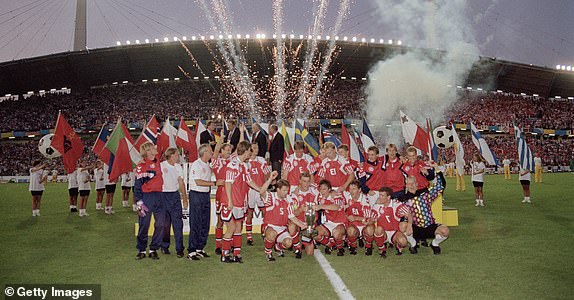 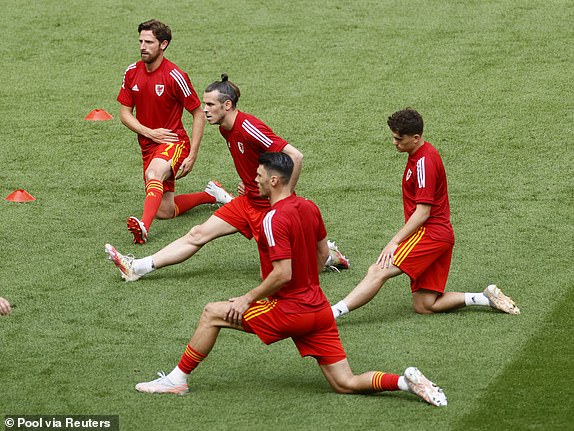 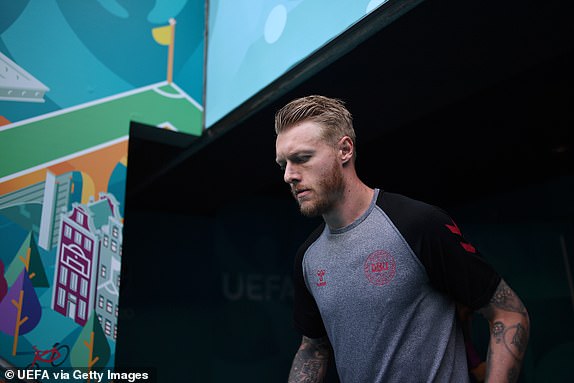 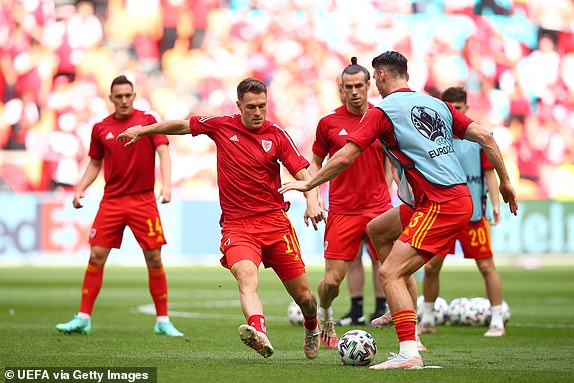 The immediate thoughts are of Gareth Bale and Aaron Ramsey when somebody talks about the Wales national team.

Yet Wales’ impressive performances in the group stage of Euro 2020 have not been down to these two men alone.

Sportsmail has taken a look at some of the lesser known names who are bidding to help Wales scribe another spellbinding chapter in tournament football.

Wales manager Rob Page has been speaking to BBC before the game and he said that his side are ‘ready to go’ and the ‘gloves are off’.

He said: ‘It’s the knockout phase now so we want our best 11 out there to compete, create chances and have a go.

‘He’s (Kieffer Moore) full tilt tonight and the gloves are off. We’ve got to respect them but we don’t fear them and they’ve got to do the same to us and Kieffer’s a big part of that.

‘We need everybody to turn up tonight. Denmark are not here by fluking it, they’re hear for a reason and they’re a very good outfit.

‘We know what we need to do to have the right to play and then on paper you’ve seen what we’ve done, create chances against a good Turkish team, different opposition tonight but we know there’s goals in this team.’ 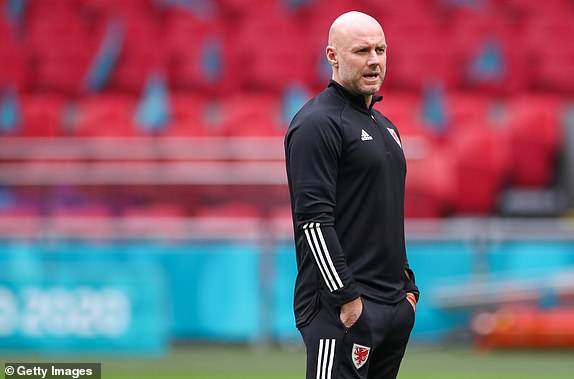 This is the first time the two sides have met since Denmark’s 2-1 victory over Wales in the Nations League back in November 2018.

Denmark have also won six of their last ten clashes against Wales who have won four. Though is the first time they have met in a major tournament.

What might be a promising sign for Wales is that they have lost just two of their last 16 competitive matches.

There will be some intriguing battles all over the pitch in the first last-16 clash of the tournament so far.

Robert Page’s men are up against a hungry Danish outfit which have been buoyed by support from around the world after midfielder Christian Eriksen suffered a cardiac arrest in their tournament opener against Finland.

With several key battles that will help to decide the outcome, Sportsmail’s Chris Sutton has outlined where the game could be won or lost.

‘Denmark are an accomplished side. They’re one of the teams people thought would have a good tournament, irrespective of the issues they’ve had which was really traumatic for them as a group and as a nation. Thankfully, Christian Eriksen seems to be well on the road to recovery. Everybody’s grateful for that.

‘Given that, Denmark are on a bit of an emotional wave and we’ll have to combat that as well. It’s a fixture we shouldn’t be afraid of. It’s similar in terms of the crowd to Turkey – we’re going to have hardly any fans whereas our opponents have 30,000 Danish fans making the trip to Amsterdam. So in similar circumstances, let’s hope it’s a similar result.

‘There’s a huge amount of Wales fans who would love to be there and create the red wall. Clearly it’s not going to happen. Is it unfair? I think you just have to accept that countries will have different rules and restrictions regarding international travel at the moment. The Netherlands are well within their rights to apply their own rules. You have to accept it and remember that everybody back home is routing for the Welsh players, so they’ll be able to take that onto the pitch with them.

‘The experience of the Turkey game will help. Wales coped really well that day in a stadium where their own fans were outnumbered considerably. It shouldn’t faze us on Saturday. Confidence will be high. As a consequence of the crowd, I think it will help to raise our performance.

‘Even though we lost to Italy the momentum will still be there. We did really well, especially after going down to 10 men. We should be looking forward to it.’

Hughes was speaking to Betfair

The Wales captain has arrived at the Johan Cruyff Arena! 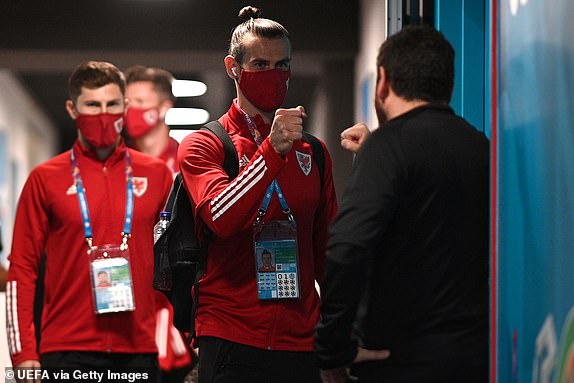 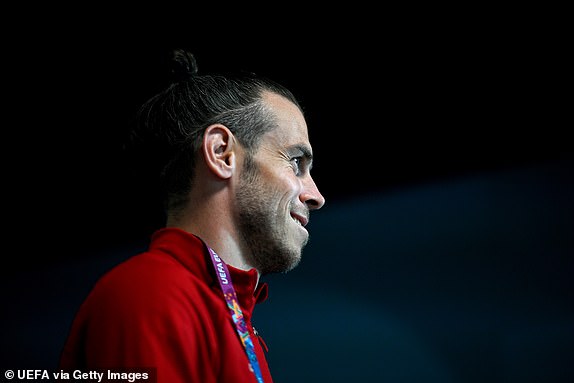 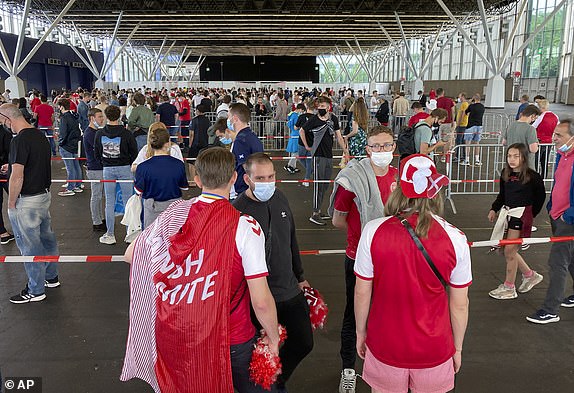 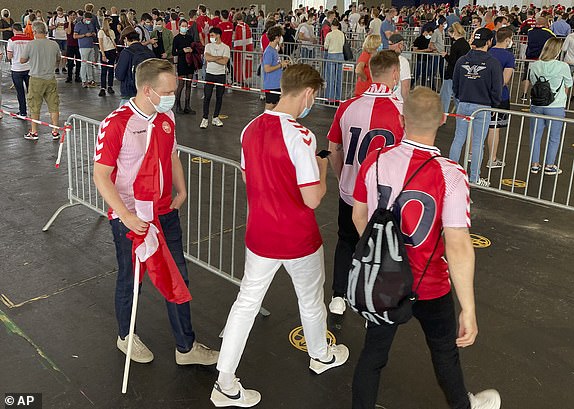 Welcome to Sportsmail’s live coverage of Wales vs Denmark in the last-16 of Euro 2020!

Two days without any Euros action – it was too long wasn’t it?!

This first knockout game should be a cracker – kick-off is at 5pm (BST), team news coming up shortly!