Home » Lifestyle » Was Daphne du Maurier in love with her real-life Rebecca?

Was Daphne du Maurier in love with her real-life Rebecca?

Fans of Daphne du Maurier's most famous novel will remember the moment its nameless narrator opens one of her husband's books to find an inscription from his dead first wife.

"A little blob of ink marred the white page opposite, as though the writer, in impatience, had shaken her pen to make the ink flow more freely. And then as it bubbled through the nib, it came a little thick, so that the name … stood out black and strong, the tall and sloping R dwarfing the other letters."

In director Ben Wheatley's new film version of Rebecca, the moment is amplified by the choice of book: an anthology of love poetry, which the narrator (Lily James) finds in a car belonging to her suitor, Max (Armie Hammer).

Wheatley knows the importance of the "R" – how its elegant curves become the visual manifestation of the woman who gives the story its name and whose memory haunts her successor. As the viewer watches through the narrator's increasingly paranoid eyes, the image recurs everywhere: stitched into handkerchiefs she finds in her coat pockets; monogrammed on guest books and invitation cards for parties the splendour of which she can never recreate; carved into the silver-backed hairbrush lined with hairs so much darker and richer than her own; echoed in the foreboding name of the boat she died in; and even suggested by the contours of a flock of birds circling over the sea.

Du Maurier knew exactly how that particular letter could inspire such feelings. For readers, it will only ever mean one name, but for its creator it signified quite another. Du Maurier's inspiration for Rebecca was her own fixation on her husband's former fiancee, whose letters she discovered among his belongings after their marriage. The signature was particularly striking. In real life, R was for Jan Ricardo. Like the narrator of Rebecca, the duration of du Maurier's courtship left her little time to uncover her husband's romantic past. In 1932, Major Frederick Browning was so captivated by The Loving Spirit, the stirring Cornish family saga, that he hopped on his boat and set off to find its 22-year-old author. A few days later, du Maurier received a note: "Dear Miss du Maurier … I wondered if you would care to come out in my boat?" 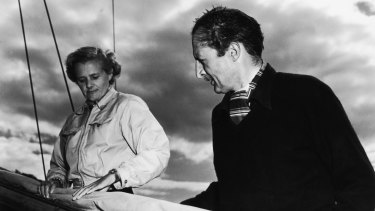 Daphne du Maurier with her husband Frederick Browning on board his yacht Jeanne D’Arc in August 1952.Credit:Getty Images

"Boy", as he was known, was a glamorous figure; a decorated war hero, former Winter Olympian and 10 years du Maurier's senior. They were married three months later. To some, it will sound like a whirlwind romance; others might consider it closer to a stalking incident. Similarly in Rebecca, the narrator quickly agrees to marry the mysterious and much older Max de Winter, mesmerised by his worldliness and desperate to escape the drudgery of her life as a lady's companion. "I'm asking you to marry me, you little fool," runs Max's proposal. We can only guess at Boy's own choice of words. 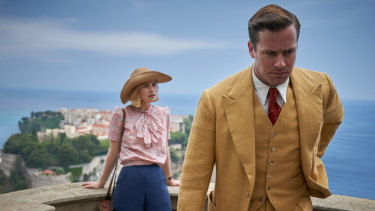 Unbeknown to his young novelist wife, the dashing army officer had a complicated romantic past. In 1929 he had been briefly engaged to a socialite called Jeanette "Jan" Ricardo. Typically for a woman of her social class, the contours of her life can be pieced together from newspaper announcements: she was born in 1905, briefly engaged to Boy, and then in 1937 married a Scottish aristocrat, Ian Constable-Maxwell.

It seems that du Maurier only became aware of her husband's past relationship by accident. "I know that she came across one or two letters or cards, fairly sort of harmless things, where Jan did sign 'Jan Ricardo' with this wonderful great R," her son, Kit, has said. According to du Maurier's biographer, Margaret Forster, Jan was "beautiful, dark-haired and glamorous", just like Rebecca, whereas du Maurier herself more closely resembled her paler, shyer narrator. 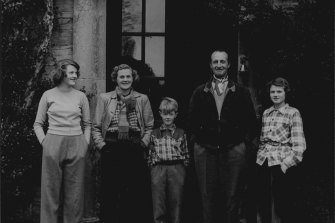 Daphne du Maurier at home at Menabilly in 1951 with her children, from left, Tessa, Kit and Flavia, and husband Ian Constable-Maxwell.Credit:Getty Images

Some of her surviving letters suggest that du Maurier became agonisingly preoccupied by the idea that Boy still harboured feelings for Jan, especially when their own marriage became strained by affairs on both sides. When she came to write Rebecca in 1936, that preoccupation formed the novel's engine. "Mum used to get so irritated with people calling it a romantic novel," said Kit. "She always said it was a study in jealousy."

At times, Jan's life seems to have run in eerie parallel to du Maurier's own: du Maurier's older sister Angela attended Jan's wedding. But it is her death that cements her status as the inspiration for Rebecca: on August 4, 1944, Jan took her own life by throwing herself under a train. She was 39. Du Maurier's reaction is undocumented but the tragedy is too closely echoed in the novel to have plausibly been unknown to her. Few records of Jan's death survive at all. She hovers, ghostlike, on the margins of history, as unknowable as the great literary absence she inspired. Perhaps Rebecca is partly the story of how women fall out of history. 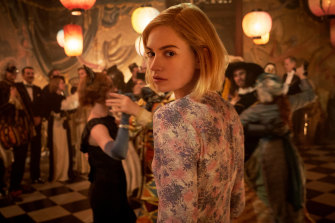 Over the years, many readers have detected a homoerotic current beneath the novel's obvious love triangle. The narrator fantasises about the first Mrs de Winter, often with particular attention to her body: "I knew her figure now, the long, slim legs, the small and narrow feet … Rebecca, always Rebecca. I should never be rid of Rebecca."

But does she want to be? Despite her best efforts to throw us off with that final sentence, the precise, lingering detail with which the narrator sketches out her tormentor suggests very different feelings. Max, by contrast, is given no physical description. Timid as our narrator is, it's easy to forget that it is she who has narrative control. We see everyone through her eyes, including Rebecca, and the picture is overtly sensual.

Wheatley's film is full of physical encounters between the narrator and Rebecca's belongings: she smells her perfume, uses her hairbrush, buries her face in her black lace nightdress. Du Maurier had several extramarital relationships with women. She fell in love with Ellen Doubleday, the wife of her American publisher, who did not return her feelings, and the actress Gertrude Lawrence, who did. Perhaps it was these that inspired the narrator's passionate imaginings about her husband's dead wife. 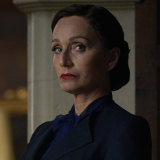 The idea for Mrs Danvers, the terrifying housekeeper, played in the film by Kristin Scott Thomas, also emerged from a real-life encounter. As a young woman, du Maurier spent time at a house called Milton Hall in Cambridgeshire. There, according to Kit: "She saw this tall, dark housekeeper woman … this terribly sinister-looking lady. I don't think she ever spoke to her, it was just a look that sunk in." The moment is recreated in Wheatley's film, made more foreboding (and more stylish) by Scott Thomas' sharp black suit and sharper scarlet lipstick. Du Maurier must have carried around the disturbing memory for years.

Milton Hall was also the physical model for Manderley, with its grey stone and mullioned windows. But emotionally, du Maurier drew upon her relationship with a Cornish house called Menabilly to evoke the pain of parting from a much-loved place. She first came across Menabilly during a family visit to the Cornish coastal town of Fowey in 1926. The long, overgrown drive and the encroaching woods that the dreaming narrator walks up in Rebecca's famous opening was lifted from this early experience.

Du Maurier fell in love with the house and finally obtained a lease for it from the owners, the Rashleigh family, in 1943, five years after the publication of Rebecca. But she never owned it and more than 30 years later the Rashleighs reclaimed it from her.

The loss of Manderley hides behind the human tragedy of Rebecca; the loss of Menabilly lies ahead, du Maurier's real-life prophecy of exile.

Rebecca is streaming on Netflix.