If you’re not too hot on cremation, and you don’t dig burials….

Washington has composted its first human.

Legislation to introduce composting as an alternative to burial or cremation, signed in 2019, came into effect last year and had its first customers in December.

Currently there are three facilities licensed to perform Natural Organic Reduction in the state, according to a report by KOIN: Herland Forest, Recompose and Return Home. 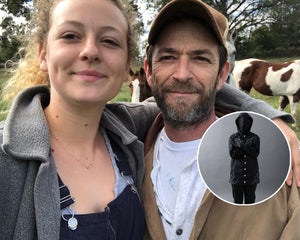 Luke Perry's Daughter Confirms He Was Buried in Mushroom Suit

Explaining how it works on its website, Herland Forest describes the process as an “investment.”

According to Senior Steward Walt Patrick, it works similar to a normal composter: the deceased is loaded into a large cylindrical drum, called a NOR Cradle, containing 200 gallons of wood chips.

“Rather than just rely on the bacteria naturally found within a person’s digestive system, we enhance the reduction process by adding a commercial inoculant that contains a mix of bacteria, protozoa and fungi,” Patrick explains.

The Cradle rests on an oscillating 20 foot track, which can be rolled back and forth as the  track is tilted.

“When the organisms reducing the remains start to run out of oxygen, the temperature inside the Cradle will start to fall. At that point, we roll the cradle to the other end of the rack and then back again to mix things up,” he said. “It’s the same sort of thing one would do with any other compost pile to ensure aeration, only in this case, the materials are fully contained inside the Cradle.”

A temperature probe ensures the insulated drum holds steady at 131 degrees for three days, which is a key requirement for natural organic reduction.

A small hiccup to the novel process was the fact Washington law requires that remains be transported in a leak proof containment; while not an issue for cremation — where the bag simply burns away — plastic will not decompose.

But the law also dictates that the only person who can remove such a plastic bag or shrouding must hold a Funeral Director or Embalmer License — so one must be present to help load the body into the Cradle.

They also must be present to legally ascertain the body being mulched is the correct person, since the process is obviously irreversible.

“Once the container is sealed, there’s no going back,” Patrick noted.

When the process is complete, the family will be left with four 55-gallon drums full of usable compost. They can take it with them, or donate a portion to Herland Forest to help grow new trees at the cemetery.