Home » Lifestyle » What to watch on December 26? The pick of the Boxing Day flicks

What to watch on December 26? The pick of the Boxing Day flicks

Sylvie’s Love takes us on a nostalgia trip back to New York City in the late 1950s and early '60s just before the Jazz Age was torpedoed by the arrival of rock 'n roll.

Sylvie (Tessa Thompson) works in her father’s record store where she indulges her twin passions, music and television. When she’s not serving one of the shop’s few customers, she’s watching sitcoms on a battered TV set. Then Robert (Nnamdi Asomugha) takes a summer job in the shop and true love enters this gloriously old-fashioned romance.

Written and directed by musician Eugene Ashe, the film neatly weaves the issues of the day – race relations and feminism – into the long-running affair between Sylvie and Robert, who are both African-American, without labouring the point. Nor does it impede the music which flows smoothly and sweetly along the storyline, evoking the glamour jazz used to have before the urban young defected to Elvis and Motown. Thompson, known to Marvel fans for her role in the Thor movies, sparkles as the enterprising Sylvie, who goes on make a career as a television producer and the elegance and the excesses of the era are portrayed with style and accuracy. 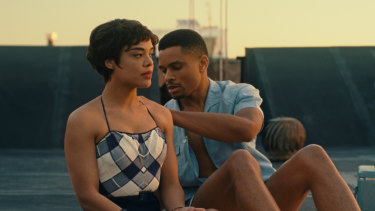 Without at least one big, noisy computer-animated extravaganza in cinemas, it would hardly feel like Boxing Day at all. Thankfully, director Joel Crawford and his team have come to the party with the lavish, occasionally witty The Croods: A New Age, a sequel to the 2013 DreamWorks hit that repeats most of the original jokes for the benefit of viewers who weren’t born the first time round. The core joke, as in The Flintstones, is the idea of “cave people” behaving just like average present-day Americans – or at least, just like average present-day Americans are portrayed as behaving in sitcoms.

Nicolas Cage returns as the voice of prehistoric patriarch Grug Crood, still with his somewhat creepily possessive attitude to his teenage daughter Eep (Emma Stone). His resentment boils over when he meets the Bettermans (Peter Dinklage and Leslie Mann), a yuppie couple who have furnished themselves with conveniences like indoor plumbing a couple of million years early. The subtext is the usual one: red and blue states, the conservative but collectively-minded working class versus the liberal elites, yada yada.

A six-year-old could figure out that much – but what sociopolitical significance can be ascribed to the “punch monkeys,” comically tiny yet savage creatures who have evolved something comparable to human intelligence, including the ability to express complex meanings by hitting each other? All I can say is that on the principle of “monkey see, monkey do", parents should brace themselves for pandemonium in the car on the way home. 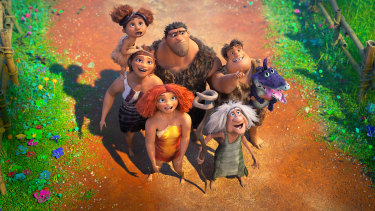 A scene from The Croods: A New Age.Credit:AP

In 1968, life at a French housekeeping school is about to change forever. A French what? The young mademoiselles at the Van der Beck Institute – an ugly country house in Alsace – learn how to become model French women during a two-year sentence – I mean, course. Not only the art of French cooking, taught by Mme Gilberte (Yolande Moreau), a stout matron with big heart and small brain, but deportment, fashion, and the rules for table, nursery and bedroom, taught by Mme Paulette (Juliette Binoche) and her husband Robert (Francois Berleand).

It’s true that Robert does little but stare through secret peepholes at the girls, but it’s a surprise when he expires on the front lawn, choking on a bone from fricassee de lapin, his favourite dish. Given that Berleand is an accomplished comic actor, and that the picture struggles to be very funny, director Martin Provost can’t really afford to lose such an asset.

Binoche does her best to keep the movie afloat, playing a woman held together only by the fine tailoring of her Chanel suits. In Paris, the citizens are revolting. Sister Marie Therese (Noemie Lvovsky) takes to blasting a shotgun from the dormitory window at night, seeing communists in the bushes. It’s like a French St Trinians, but with a feminist message that’s as laboured as most of the jokes. An unexpected musical finale during a bus ride to Paris makes up for some of the dull proceedings, but not nearly enough. Humour this broad is hard in English; in French, it’s insupportable. 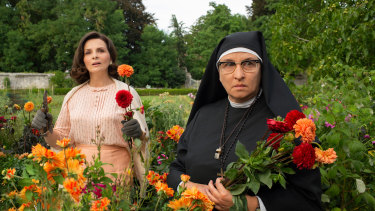 A scene from How to Be a Good Wife. Credit:

A dark-bearded man of about 40 hooks up with another bloke in Barcelona. After some muscular man-on-man action they part, but Ocho (Juan Barberini) feels the need to contact Javi (Ramon Pujol) for an outing. After all, they are both on holiday in a beautiful city, so why not? At this second meeting, over wine and cheese on a rooftop, Javi tells Ocho they have met before.

The movie pivots at this point towards something interesting, but first-time director Lucio Castro refuses to quicken his pace. This is slow cinema by any standard – not dull, but glacial, demanding that we concentrate and observe. The longer it goes on, the more interesting it becomes – although I was distracted by that premise: even after 20 years, could you forget that you had made love to someone who looks exactly the same now as he did then?

It’s a structural condition of the story, of course. If you go with it, the movie becomes a meditation on sliding doors moments and what might have been. It could have been just a formal exercise in that sense, but Castro never lets it become that. There’s always a strong humanity in the relationship between these two men, enough to carry us through. Or not, depending on your appetite for gay sliding door romance. In the end, there’s something banal and ruthless about that wondering what life would have been like if…. 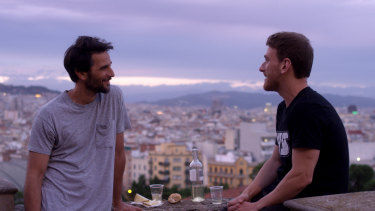 A scene from the movie End of the Century. Credit: