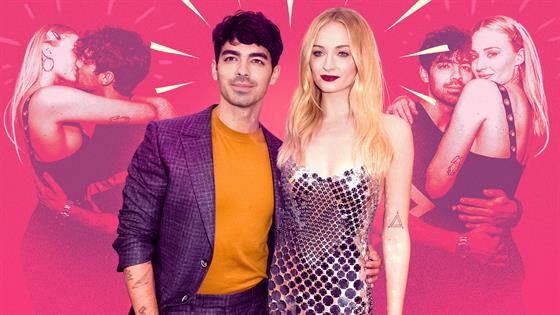 Once upon a time a Jonas Brother shocked the world by revealing he’d proposed to a well-known actress.

Nope, not that one.

What withNick Jonas marrying Priyanka Chopra over and over again, it was easy to lose track of the fact that his older brother put a ring on it first. In fact, Joe Jonas and Sophie Turner had been celebrating their engagement for 14 full months before Nick and Priyanka began collecting wedding receptions like some newlyweds acquire place settings.

The singer-actor’s romance with the former Miss World champ turned international actress and philanthropist certainly captivates, even earning the freshly minted bride and groom their own Vogue cover. And Jonas’ decision to gift his wife a $199,000 Mercedes Maybach a handful of months into their union just ’cause places them squarely in the oh-so-desirable “goals” category.

But dare we say it’s Joe and Sophie’s love story—now adding a new chapter—that’s most covetable.

Because, let’s be real, not many celebs have the star power to turn the Billboard Music Awards into the opening act for their surprise Vegas vows.

Not long after taking the stage alongside his reunited bandmates at the event exactly one year ago—and just weeks before their planned vows in southern France—Joe and his bride were off to the chapel and they went and got married in a ceremony complete with an Elvis impersonator, the exchange of Ring Pops and Diplo acting as unofficial videographer. Country music duo Dan + Shay even serenaded them down the aisle with their song “Speechless,” and then everyone joined in for a big bash at the MGM Mansion.

The whole extravaganza, while not exactly unplanned, was just as breezy as their origin story.

Noting they “have a lot of mutual friends” who had “been trying to introduce us for a long time,” the British actress (a.k.a. Game of Thrones‘ Sansa Stark) told Harper’s Bazaar UK she and the DNCE vocalist, 30, were following each other on Instagram when “he direct-messaged me one fine day, out of the blue.”

Joe Jonas and Sophie Turner just had a surprise wedding in Vegas after the #BBMAs…and that's the tea. Link in bio for everything we know! (📷: @diplo)

Joe Jonas and Sophie Turner just had a surprise wedding in Vegas after the #BBMAs…and that's the tea. Link in bio for everything we know! (📷: @diplo)

So, no, it wasn’t mutual pal Hailee Steinfeld that played matchmaker, though it’s a rumor she doesn’t hate.

“Are they saying that? I will totally take credit for that, if they are saying it,” she shared last October on The Tonight Show. Because she did play a role.

Since she had teamed up with DNCE for their 2015 hit “Rock Bottom”, she told host Jimmy Fallon, “I definitely got the, like, ‘Tell me about Joe Jonas’ call. Sophie and I have been friends for years. She’s one of my favorite humans. And Joe, same. Joe and I worked together a couple years ago, and he is also a wonderful person and it worked.”

The 24-year-old called, remembered Steinfeld “cause she knew that I knew him and sort of asked for my opinion. I gave her the truth.” While Steinfeld neglected to details the specifics of the chat, the overview was clear. As she summed up during a January 2018 sit-down with Nova 96.9’s Smallzy, “I was like, ‘Go for it.'”

So, Turner up and went. 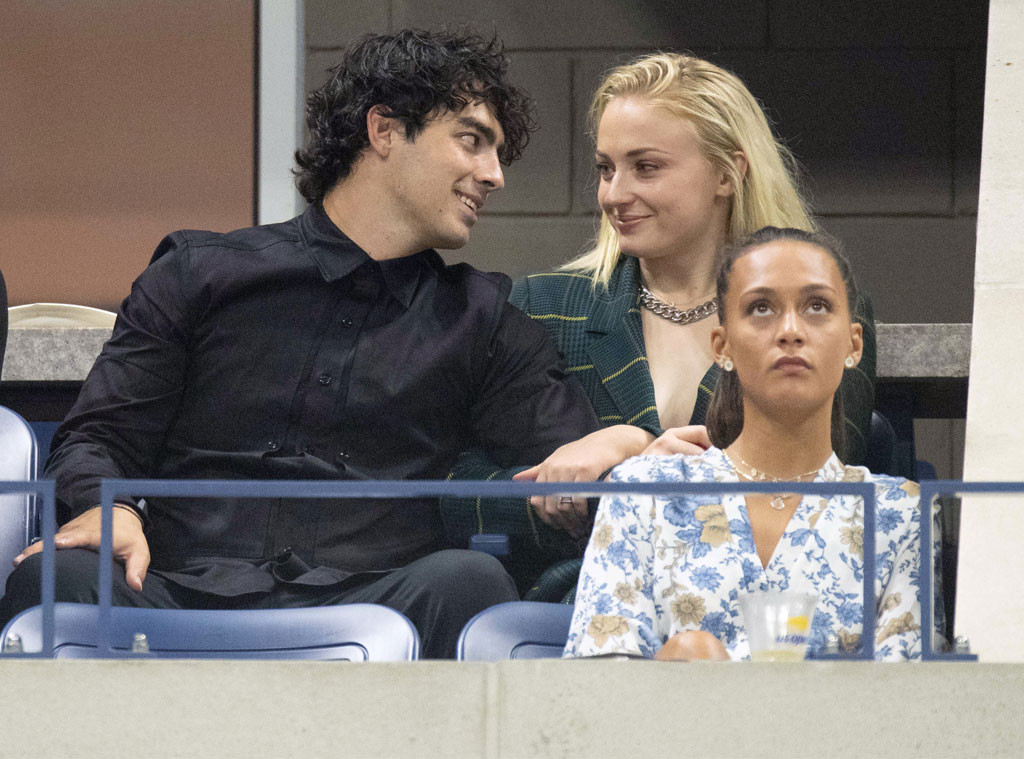 The native of New Jersey by way of Arizona already possessed Sophie’s most-desired trait in a mate. As someone who’s been squarely in the spotlight since her 2011 GOT debut at age 16 it just seemed easier to date someone who got “it,” the fact that her time wasn’t always hers and sometimes they would need to make do with on-the-fly dates and Facetime catch-ups.

“I found it easier to date someone who understands the industry or is in that world,” she noted to In Style in 2017. “You realize that you’re not going to see each other all the time. And you don’t feel like a jerk when you’re like, ‘My publicist says I can’t do this…'”

As for Sophie, she had the requisite easy-going nature Joe was after (“I would say she’s gotta have a sense of humor and find my weird sense of humor funny,” he told People of his ideal gal) and the ability to pass his patented girlfriend barometer.

“The biggest test is bringing her around friends because I have friends who are really tough about new people—we have a really tight circle,” he explained to the mag months before they began dating in 2016. “You bring them around friends and see if they can handle themselves well—that’s usually a good test.” 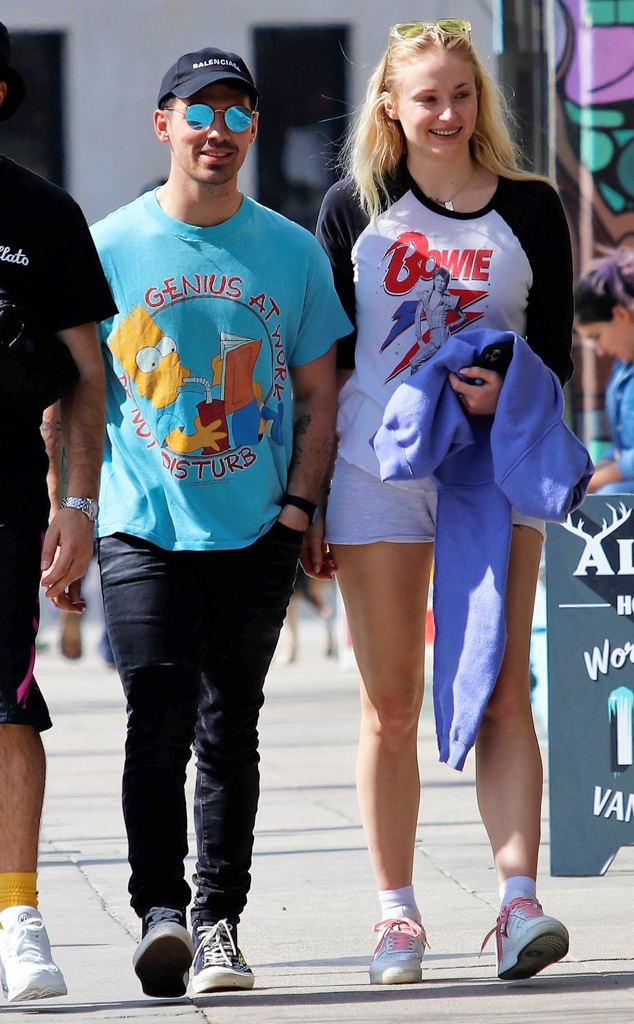 It was precisely the same barometer Turner used during that initial meet-up.

Having assumed the boy bander “would be such a d–k,” as she put it in Elle‘s April issue, she was pleasantly surprised when he showed up without security or an entourage, just one pal who was ready to hang with her and her rugby crew. “He brought a friend and they drank just as hard as the rest of us,” she recalled. “I remember us two spending only a couple of minutes on the dance floor, and then we found a space in the far corner and we just talked. We talked for hours, and hours, and hours. And I wasn’t bored. It wasn’t contrived, it wasn’t small talk—it was just so easy.”

With that one successful date, “we were inseparable,” she told the mag. “And then I went on tour with him.”

Entirely smitten with the singer, she continued, “I always felt like I was the one who was punching, like, way above my league. And I still feel like that,” she shared. “He’s so handsome, talented, funny, charismatic. I’m really lucky to be with him and have someone like him want to be around me and spend time with me.”

As is the case with any successful couple, he’s just as sure that he’s the one getting the better end of the deal.

Just months before their meeting he’d been telling Us Weekly, “I’m dating, but nothing serious. I’m really trying to just focus on myself and the music,” but with Turner, he found himself falling hard. As he joined he at a friend’s 2016 Halloween party (she clad as a bunny; he a Dalmatian) and a pre-MTV European Music Awards Kings of Leon concert in the Netherlands that November he realized this romance wasn’t destined to be like the others.

“They’re dating exclusively,” a source told People. “He was playing the field, but he really likes her and is willing to settle down for her.”

That meant integrating her into his famous fam (she joined him on a group ski trip to Mammoth; he met her teacher mom Sally and dad Andrew, an employee at a pallet distribution company, at a North London pub near their home in Warwickshire) and even going Instagram official, Sophie posting a photo of her guy casually lounging on the back of a boat in Miami while smoking a cigar.

And by January 2017, they had advanced to the making out at a Golden Globes party level of devoted.

“Joe is taking this relationship very seriously,” an insider told People. “She’s different from the other girls he has dated.”

But while their union had all the earmarks of a Serious Relationship, the pair committing to a shared husky puppy before Joe slipped an impressive pear-shaped diamond on her left hand in October 2017, it was anything but stuffy.

Their matching tattoos—the hallmark of any important twentysomething relationship—came from their shared love of Toy Story and his 2018 Halloween costume was a take on his fiancée’s fame-making character. (Proving she possesses not one ounce of pretension, the actress opted for an elephant onesie when the duo turned out at Kate Hudson‘s annual bash.) The look, complete with a red-hued wig, could be seen more as homage than sendup, but Sophie has said she appreciates someone who can take the piss out of her, so to speak. 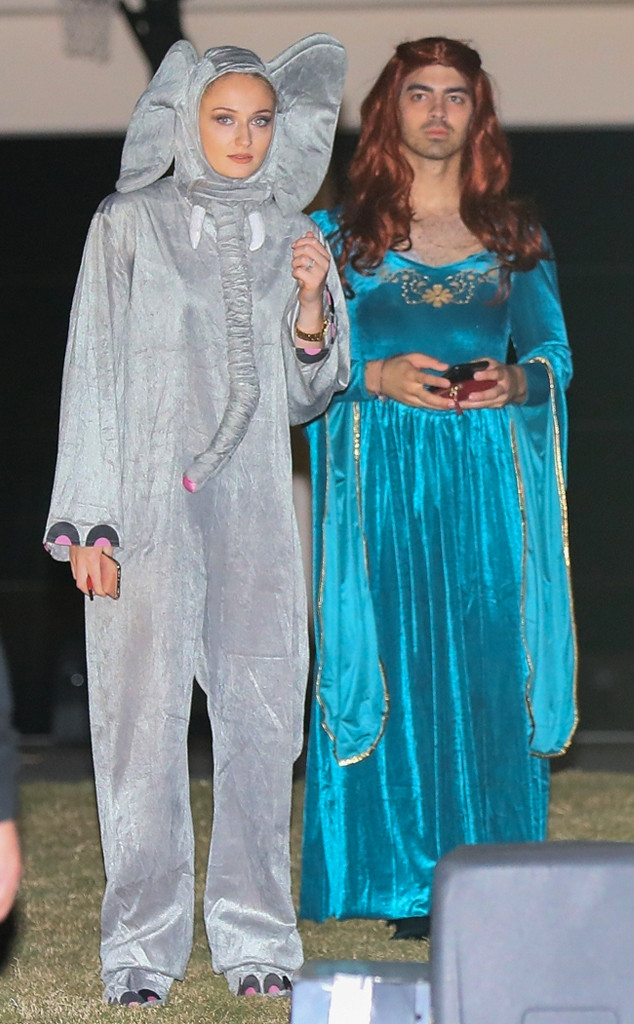 “I have a lot of friends who were brought up in the UK like me [who] are working in L.A. as actors. When I go over, I’m giving them s–t and being sarcastic. They’re like, ‘Thank god,'” she shared with UK’s Marie Claire in 2017. “They’re stuck in this place where everyone is so far up your arse. It’s a business town, it’s understandable. But sometimes you just need someone to tell you that you’re not a f–king superstar.”

And while both she and Joe are thrilled to have identified their lifelong companion, neither subscribes to the notion that becoming a spouse is the pinnacle of their accomplishments.

“I’m still like, Holy s–t! I’m engaged,” she admitted to Marie Claire in 2018. “There’s this weird misconception that being married is the greatest thing that’ll ever happen to you. But I’ve always found that my career is something I work for, and when I achieve something, there’s a sense that this is the greatest thing I’ll do in my life. It’s lovely to be engaged. Not like I achieved anything, but I found my person, like I’d find a house that I love and want to stay in forever. There’s a sense of peace that comes with finding your person. But there’s a drive that comes with your career.” 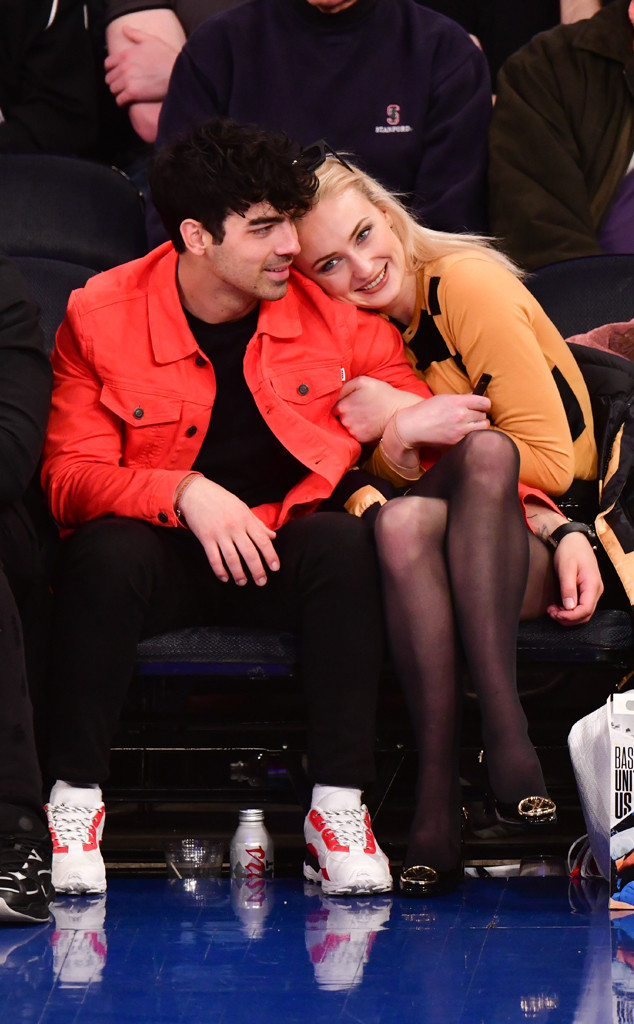 Not as though that made them any less stoked about tying the knot.

Having watched both Nick and older brother Kevin Jonas enter into matrimony (the eldest Jo Bro wed bride Danielle Jonas at New York’s Oheka Castle when he was just 22), he’s now an expert level groom. “They were both absolutely beautiful,” Joe said of his siblings’ nuptials during an appearance on The Late Late Show with James Corden. “All 18 of Nick’s were amazing. For Kevin, Kevin had a snowstorm during his wedding, which was fantastic. So maybe don’t get married in December. And for Nick, there were quite a few but I would say stick to one. One and done.” It’s clear the pair have every intention of celebrating both anniversaries, even if the current social distancing measures made a return trip to Sin City impossible. “I might try to recreate Vegas in our house,” he told host James Corden on The Late Late Show. “I have a DJ set up. We could do a night club.” Perhaps even Zoom session with the Elvis Presley impersonator who married them?

Frankly, that’d be on the low-key side for them. “We used to be the couple that every few days we would celebrate,” he noted. “So, it’d be like, we’ve been dating for a week, we’d have a party or a big dinner. We’ve been dating for a month…and we were that nauseating couple.” Now, though, he continued, “I think we’ve chilled out quite a bit.”

Though, of course, they have quite a bit to fete these days. While the duo have remained mum on the news for months, multiple sources confirm to E! News that Turner is expecting. “They are extremely excited!” says one insider. “They told their families recently and everyone is ecstatic and so happy for them.”

Because who wouldn’t be thrilled that such a strong duo are becoming a trio? “They truly are the best couple,” another source told E! News, “and everyone is obsessed with them together.”

Count us amongst good company, then.