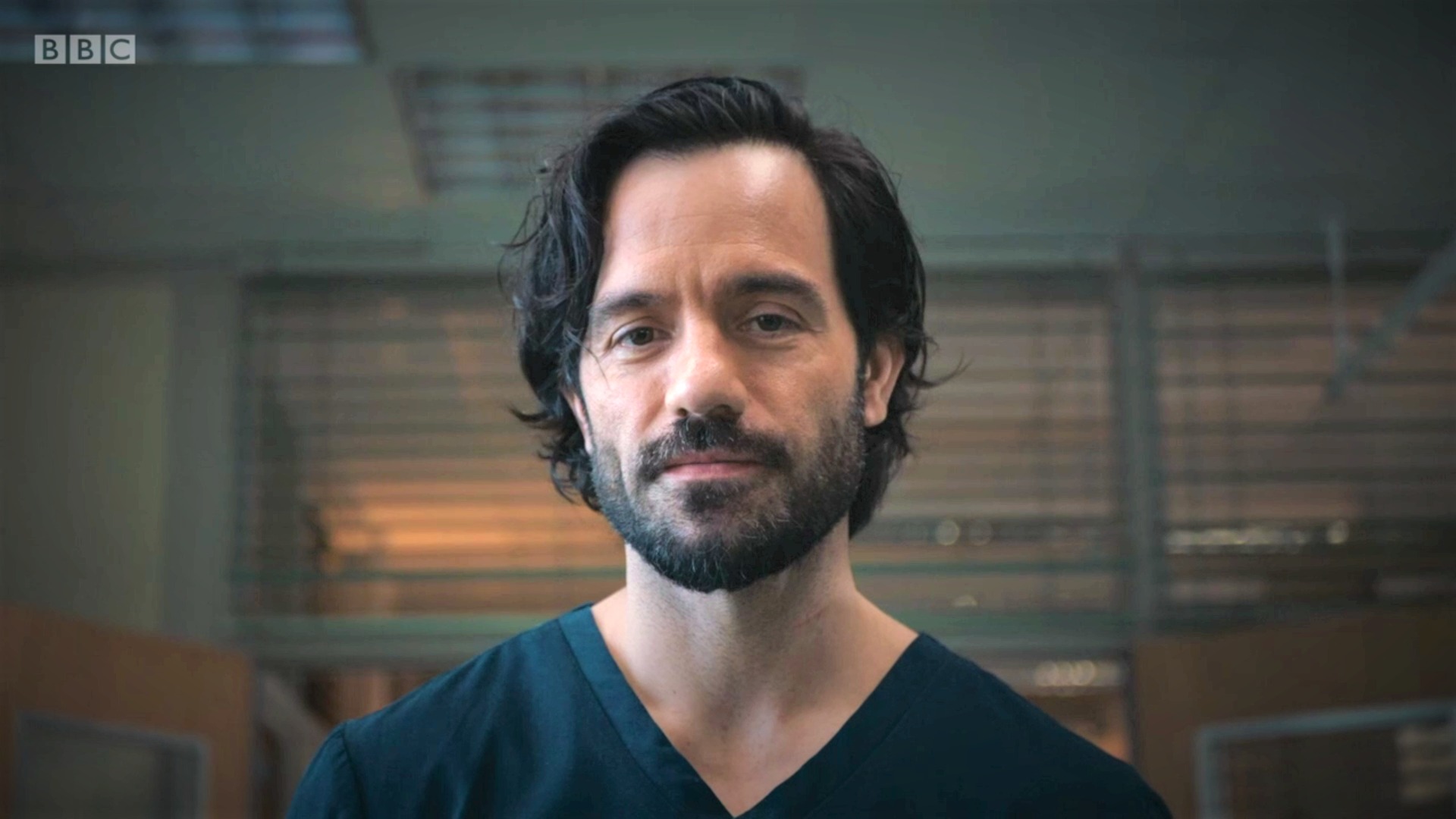 Initially, Kian seemed like the hero doctor who had everything sorted. He wasn’t afraid to stand up to Jac Naylor (Rosie Marcel), he took enthusiastic Nicky (Belinda Owusu) under his wing and, for a while, it seemed like Kian was the perfect man.

However, following the death of Kian’s partner Bea, his life began to unravel. He got stuck on a mountain with Jac (no, really) and we began to see more of the side to Kian he spent so long trying to hide.

Kian’s pattern of holding onto a partner to try and get by in life was the catalyst for Jac’s exit back in February. The two of them began a relationship and even after Jac discovered Kian’s drug addiction was out of control, she chose to stick by him and try to help get him clean. But, following a terrifying gun showdown on Darwin Ward, Jac’s time at the hospital came to an end after finding Kian taking drugs moments after their lives were in danger.

After initially refusing to let Kian operate on Evie, Fletch was forced to find him for help. But after telling him some brutal home truths, the nurse found Kian unconscious in the locker room.

Tonight, as Fletch wheeled Kian into theatre following an overdose, Chloe (Amy Lennox), Max (Jo Martin) and Henrik (Guy Henry) did all they could to save one of their own, but it sadly wasn’t enough.

Holby City has an incredible ability to consistently deliver ground-breaking, emotive episodes and tonight was no different. With the news of the drama’s cancellation firmly in our minds, tonight’s episode proves that Holby City needs to be saved.

Adrian Fletcher – Director of Nursing and the character who led this episode outstandingly. Even though Fletch was clearly angry and hurt at the ‘two-bit junkie’, he put aside his worries over his daughter’s life being in jeopardy for Kian’s sake.

One of the most special things about a medical drama is its power to tell and link so many storylines together. There was Jeong-Soo (Chan Woo Lim), a junior doctor who thought Kian’s death was his fault after leaving the drugs cabinet open. As he made his way back to Keller, his emotions impacted the way he was working and cleverly, they had an affect on Dom (David Ames), the new clinical lead who had to adapt his leadership skills to help the clearly struggling Doctor Han.

Down in AAU, lovesick Josh (Trieve Blackwood-Cambridge), was in the middle of another busy shift with just a few precious moments spare for a break with his friend.

Josh and Jeong are the polar opposites and yet they’re connected through their work and in agreement that sometimes it ‘just gets too much, doesn’t it?’.

One episode of Holby City has so much going on, so many plots and yet they all end up connecting, showing the togetherness of an NHS hospital.

Taking on Andrei (Sonny Poon Tip) was always about one thing for Kian: a distraction, and that’s what everything has been about for him since the death of his wife. ‘How did you get here?’ Fletch questioned in the previous episode. To be honest, maybe Kian’s medical career at Holby City was all just a huge distraction to hide the pain he was constantly in since he lost his beloved partner.

The introduction of Holby City’s mental health nurse Lucky Simpson (Vineeta Rishi) has made a huge impact on the way each episode plays out. Lucky’s arrival has allowed developments for the show like never before. We’ve seen Lucky approach patients, support staff members especially after the first Coronavirus wave, she tried to get Kian clean but overall, it’s allowed a new and exciting opportunity to represent another angle of someone working for the NHS.

Kian Madani’s time at Holby City Hospital has always been about men’s mental health in some way or another. This was a man who hid behind his bravado and cocky attitude and ultimately, this was a man who helped others, but never himself.

After the chaos of trying to save Kian’s life tonight, there was calm in the form of Fletch bringing Darwin Ward together after everything that happened.

Fletch’s monologue in the closing scenes was incredibly moving. Written by Andy Bayliss, he contrasted the darkness of Kian’s addiction with the light of Fletch encouraging his colleagues to ‘help each other’ and ‘speak up’.

Tonight’s episode was the perfect example of why Holby City can’t go off air.

Overall, it proved that saving this drama is vital in order to continuously adapt and tell powerful storylines that reflect and represent the world we live in today.