Windows 10 is finally fixing one of its most frustrating features

If you were worried that Microsoft hasn’t been listening to your concerns – you’d be wrong. One of the most frustrating features in Windows 10 since it first launched back in July 2015 has been Windows Update. These have gained an unfortunate reputation for being intrusive, difficult to configure, and even tougher to dismiss.

Microsoft has scaled back its Windows Update prompts from the early days, when the Redmond-based company issued fullscreen pop-ups that were notoriously tough to dismiss. However, Windows Update is a still a pain-point for many users.

Thankfully, the latest beta suggests Microsoft has heard the feedback. If the feature remains unchanged during the beta development process, the Windows 10 May 2020 Update (version 2004), will improve the notification of a pending update to make things easier and more transparent.

Following the update, Windows 10 users will see the notification about a new update waiting to be installed on your machine in the Notification Centre on the right-hand side of the screen. The pop-up itself will now offer the options to Restart Now, Restart Tonight or Choose an Hour. Selecting the latter will let you choose a time that’s convenient for you.

Selecting any of these options, Microsoft will remind you to ensure your laptop or two-in-one hybrid device is plugged in to enable an uninterrupted update.

MORE LIKE THIS
Google Chrome finally gets serious competition: are YOU going to switch? 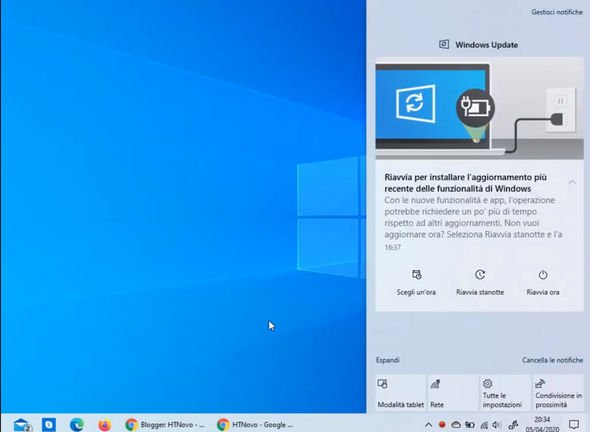 It’s incredibly important to make sure your laptop is plugged in – in case the battery level is low – before starting an update to the operating system.

After all, if your computer dies mid-update, it could trigger serious problems with Windows 10. In the worst-case scenarios, you could be forced to reinstall the operating system from scratch to get everything working as normal again.

Microsoft will roll out the update in the coming months, provided there are no substantial changes. So, you won’t have to deal with the previous, more obtrusive Windows Update notifications for much longer.

We already know that Microsoft is bringing some substantial changes to Cortana in the Windows 10 May 2020 Update. Following the update, Cortana will be moved to a standalone app, instead of living in the taskbar at all times.

Visual tweaks are also expected alongside the typical stability and security improvements.