A 28-year-old paramedic who quit her job and moved into a van has opened up about her life on the open road – insisting that she is happier than she has ever been, despite admitting that her cramped living conditions have taken a serious toll on her love life.

Social media entrepreneur Dominique Ritchie, from British Columbia, Canada, grew up on a farm and from a young age, she has had a keen appreciation of the outdoors.

As a young girl, Dominique was taught that with hard work she could achieve whatever she wanted, a mentality that helped her to achieve success throughout school, and earned her a place at university, where she studied to become a medical physician.

During this time, Dominique became increasingly interested in the issues of environmental health and sustainability. As a result, she looked into opportunities to live a more minimalist lifestyle and began following others on social media who had decided to embark upon the van life. 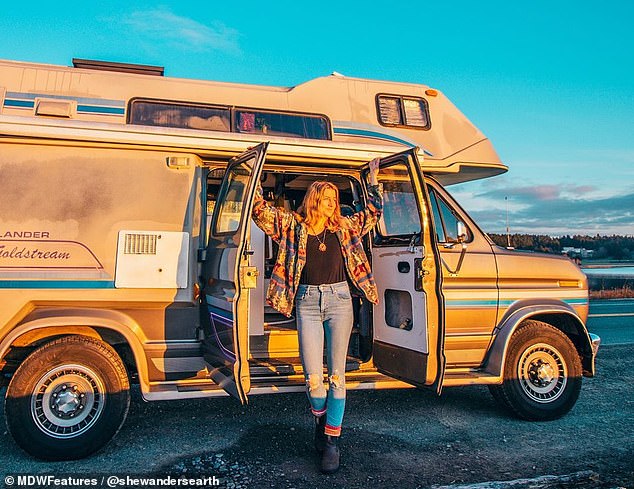 Out in the open: A former paramedic who quit her ‘unfulfilling’ job and moved into a van has opened up about what life on the road is really like 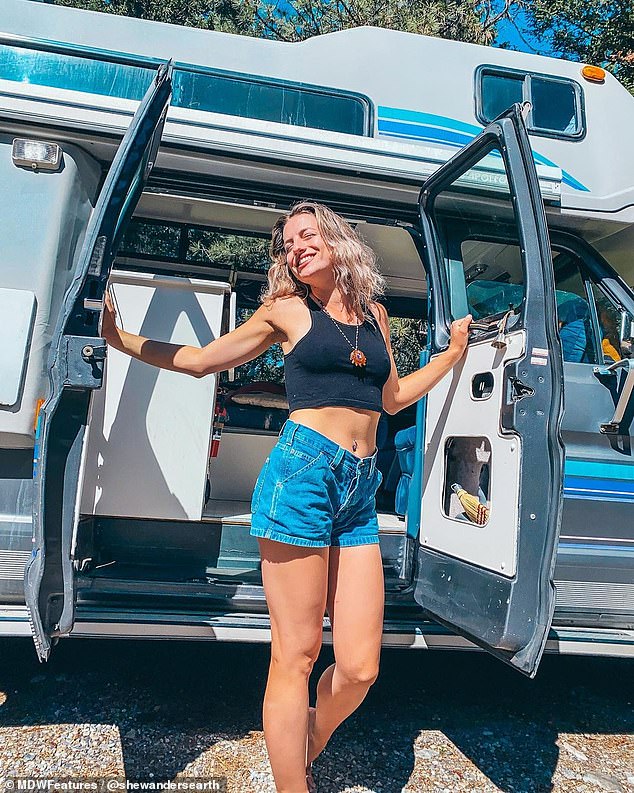 Freedom: Dominique Ritchie, 28, from British Columbia, first tried her hand at ‘van life’ in the spring of 2018 when she moved into a $21,000 Hyundai SUV 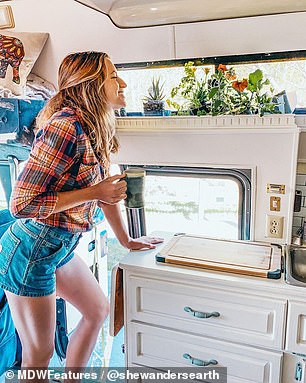 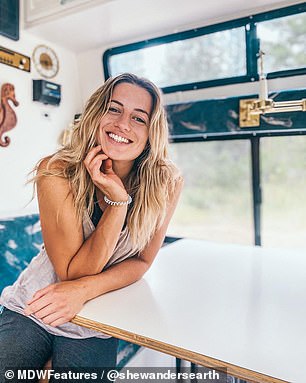 Natural: She originally thought that she would just live in the SUV for the summer, but she loved the lifestyle so much, she decided to permanently move into a bigger van

Dominique was transfixed with the freedom and happiness these people seemed to have and whilst she enjoyed her job as a paramedic, she felt that something in her life was missing.

In the spring of 2018, Dominique took a leap of faith and decided to quit her job and swap her home in North Vancouver for a Hyundai Sante Fe SUV at a cost of $21,000.

Initially only planning to live in her van over the summer, Dominique found that as the days and weeks went on, she felt increasingly happier than she had ever felt before and decided to make the permanent transition to full time van life.

In February 2020, Dominique bought her much more roomy Chevy Express cargo van, which she has named Isla for $8,000, requiring an additional $3,500 in maintenance.

Dominique has since travelled across Canada three times, as well as journeying across the United States with her two-year-old Blue Heeler dog, Kaia. Her favorite destinations include Glacier National Park and Garibaldi Provincial Park in British Columbia, Canada, and Arches National Park and the Oregon coast in the US.

Dominique usually stays in one spot for between two to four weeks and makes mini bucket-lists of places she would like to visit depending on the mountains she wants to climb, the outdoor skills she wants to work on, and the friends she wants to visit.

With no running water, Dominique only uses 22 gallons of water per week, compared to the estimated 700 gallons used by an average US citizen. She also runs her electrical appliances completely on solar power and as a result is able to live the sustainable life she dreamt of.

For Dominique, the biggest perks of van life include being completely free to choose exactly where you want to go each day, having everything you need always with you, and constantly making new friends on the road.

However, she admits that her lifestyle isn’t always as peaceful as Instagram suggests. Finding places to park that are suitable for her dog and allow her to have the freedom to run around can be tough.

Dominique also says that finding love isn’t easy when constantly on the road. Despite meeting several men who seemed enthusiastic about the nomadic lifestyle at first, they soon lost interest when they realized it wasn’t their dream.

‘I spent my late teenage years and early twenties attending university, with the ultimate goal to become a medical physician,’ Dominique said.

‘Through my education and extra curricular courses, I learned much about public health, mental health, environmental health, and sustainability.

‘It was within some of these courses that my mindset shifted and I became suddenly more aware and concerned about our planet.

‘I wanted to become involved with and learn from British Columbia’s parks, conservation, fisheries and oceans.

‘As these topics overtook my attention I also started learning about alternative lifestyles, and that was truly when everything took off for me.

‘I couldn’t wait to finish my degree in molecular biology and biochemistry so that I could focus all of my energy on what I now loved the most: helping Mother Nature and spending all of my free time recreating outdoors.

‘I first came across the idea of minimalism, car life, and van life in the early months of 2018. I started watching other people’s alternative lifestyles, listening to their reasons, and learning from their choices.

‘What stuck with me was that they all valued what they had. They had a purpose for nearly every item in their tiny space.

‘In that present moment in my life, I was in a place where I didn’t know what my values were, what my goals were or what my future looked like. 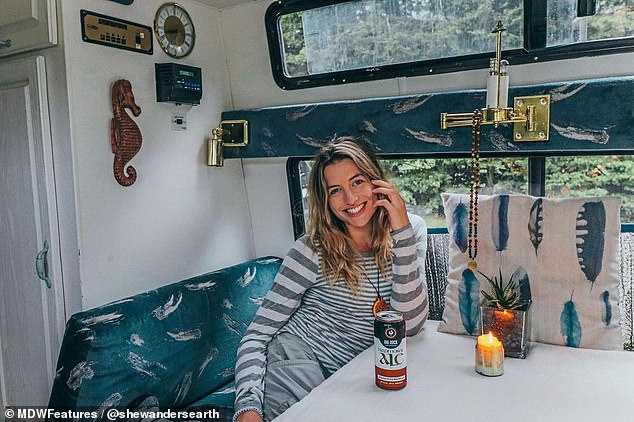 Companion: Despite meeting several men who seemed enthusiastic about the nomadic lifestyle at first, they soon lost interest when they realized it wasn’t their dream 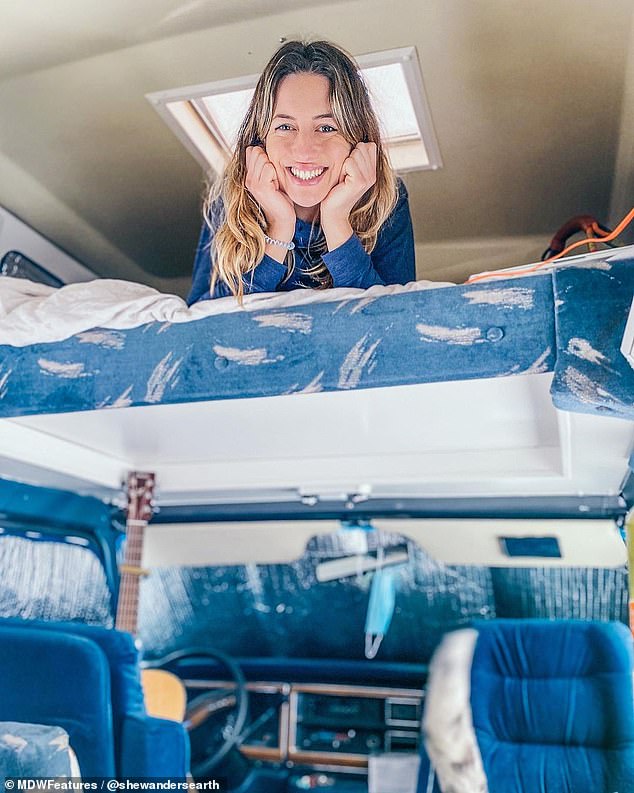 Cozy! She admits that the lack of running water and very cramped living conditions don’t appeal to many guys 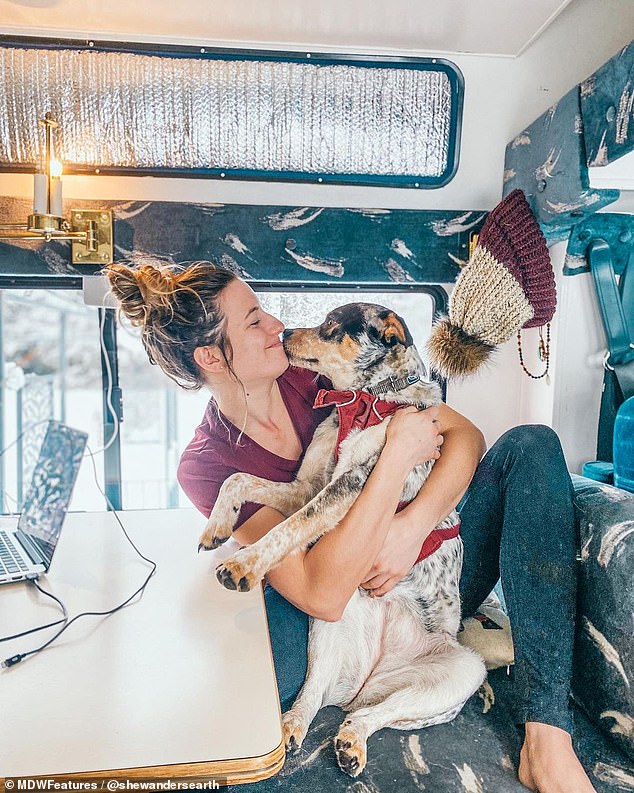 ‘When I was in university, I was dedicated, motivated, and excited to be excelling in my path to medical school, but something was missing and I wasn’t fulfilled.

‘Although I loved helping people and working in the paramedicine field, it wasn’t where I felt truly expressed.

‘It was a huge leap of faith to sell nearly everything I owned and leave my full time and high paying job as a paramedic.

‘Now that I was completely house-less and directionless, I knew I could create any future I desired.

‘I was scared, but I was free and I was the happiest I had ever been.

‘This has created so much space for happiness, creativity, and peace in my life.

‘My original plan was to only do it for the summer but as I became happier and happier as the days and weeks went on, I knew I couldn’t go back.

‘It has now been over three years and it is safe to say I am still living for my true self.

‘I purchased my current van, called Isla, in February 2020, renovated her, and have been living in her since.

‘When deciding where to visit, the first thing I do is write out my bucket list.

‘I ask myself questions such as, “What mountains do I want to climb this year?” and “Which backpacking hikes do I want to complete?” or, “Which outdoor skills do I want to work on?” and, “Which friends would I like to spend more time with?”

‘The best part about van living is having everything you could possibly need with you at all times.

‘Being able to choose where you live every single day is incredible. 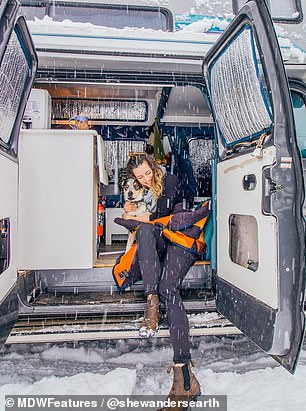 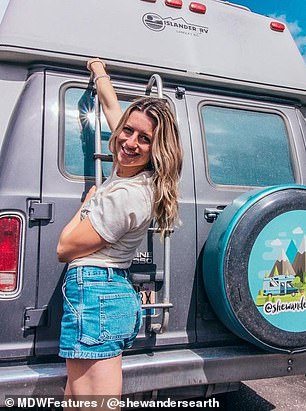 Staying strong: Despite struggling to meet men while living in her van, Dominique says she refuses to sacrifice her dream lifestyle for a relationship 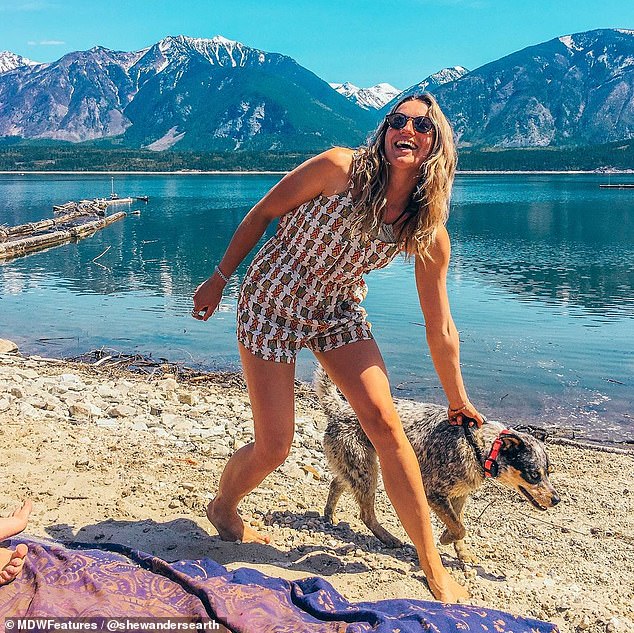 Advice: ‘Do not sacrifice your life or alter your lifestyle in any way for a relationship,’ Dominique said 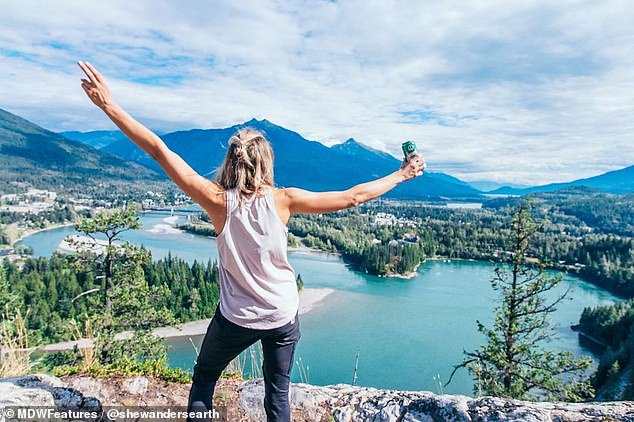 Goals: ‘It definitely takes the right kind of person or at least someone with an adapting attitude,’ she added

‘You get to wake up under the sunlight each morning and fall asleep under the moonlight every night.

‘Meeting new friends and family on the road, whether these are other nomads or not, striking up conversations with people and making friends from around North America has been one of my biggest highlights.

‘My biggest challenge in living the van life has been always making sure I park in a convenient place for Kaia.

‘Her health and happiness is my number one priority and so this means finding somewhere that I can set up her long line if I have to work for more than four consecutive hours.

‘I have met a few men that at first think van life is the coolest thing ever and want to do it too, only to soon find out that it isn’t their dream and they lose interest quickly.

‘There are the little inconveniences that can be difficult or challenging for some when dealing with them for weeks or months at a time.

‘Men I’ve dated have struggled to adapt to running out of data when trying to work, the washroom and toilet situation and the constant close proximity.

‘There isn’t a television or video games, so if those are must-haves in your day to day, you will likely choose staying home than going stargazing or reading a book with your girlfriend.

‘It definitely takes the right kind of person or at least someone with an adapting attitude.’

Whilst Dominique understands that van life isn’t for everyone, she hopes that her nomadic adventures will inspire others to be true to themselves and follow their dreams.

‘Do not sacrifice your life or alter your lifestyle in any way for a relationship,’ Dominique said.

‘My personal-plans for the future are to continue to scale my online business and keep inspiring others to pursue their life mission.

‘Full time van life is the only thing I see in my future at the moment.’