When “Wonder Woman” costume designer Lindy Hemming heard that the follow-up to the 2017 box-office hit starring Gal Gadot was going to be set in 1984, her first question was would the costumes fall under period or fantasy?

The answer is a simple one, “both,” Hemming says.

Below, Hemming breaks down key looks from “Wonder Woman 84” and creating an ’80s wardrobe for Chris Pine, Gal Gadot and Kristen Wiig.

In the first film, Diana/Wonder Woman was down and dirty because she was in the trenches. With this, director Patty Jenkins wanted to change the texture and look to give it a glowing ’80s feel.

We changed the material of her bodice and made it from urethane which can be molded. We changed the design a little bit so it’s more translucent because Patty wanted everything to have this slightly hyperreal feel to it, so you can see the colors – the blue, the red and the gold glow more.

In the comic book series, there are two stories “Kingdom Come” and “Burning Devastation” where we are introduced to the Golden Armor and it has this very American feeling to it with the eagle motif and headdress. In one sequence [in the comic], she wears it with the American flag draped over it, so that’s where we started.

Then, I went out and researched a lot of ancient armories that were gold. There wasn’t anything in them that made me think that they had anything to do with Wonder Woman or Themyscira, but it was true that in ancient times, people were buried in golden armor.

For the film to appeal to the younger audience of “Wonder Woman,” I needed to give it a slightly fashionable look. So, I looked into Alexander McQueen, Thierry Mugler and Natalia Vodianova. Also, Gareth Pugh, in 2011 did a fantastic chainmail dress that had tiny mini plates of gold on a fabric background.

I had to give her under armor, and so her bodysuit could have a feeling of that. The golden armor needed to have this depth to it and not look like a lump of metal.

The most important thing was not to make it mirror-like in any way, so you couldn’t see crew reflections, and if you did see any, they were abstract. So, all credit goes to the technicians who worked on it.

It took at least six months from the first drawings and discussions to finish. From the drawings, we went into the 3D modeling. The costume is a bodysuit with a corset to support it all, and was made from individual panels so she could move.

I have to say Gal was very patient with trying it all on. We went through fittings where we made the panels thinner and thinner to see how far we could go without it breaking. And with Gal’s agreement, we got it to a weight that she could bear.

Steve Gel was a screen printing artist who printed the bodysuit that she wore underneath. It was a zip-in outfit that weighed about the same as heavy-duty stockings. 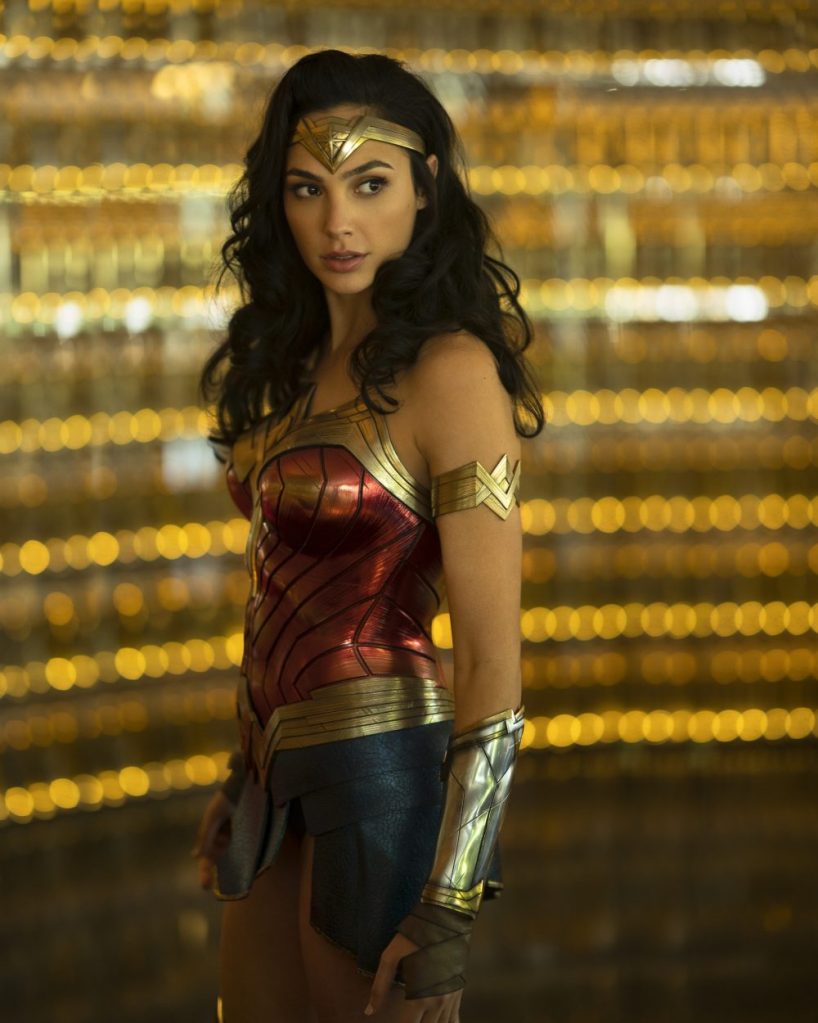 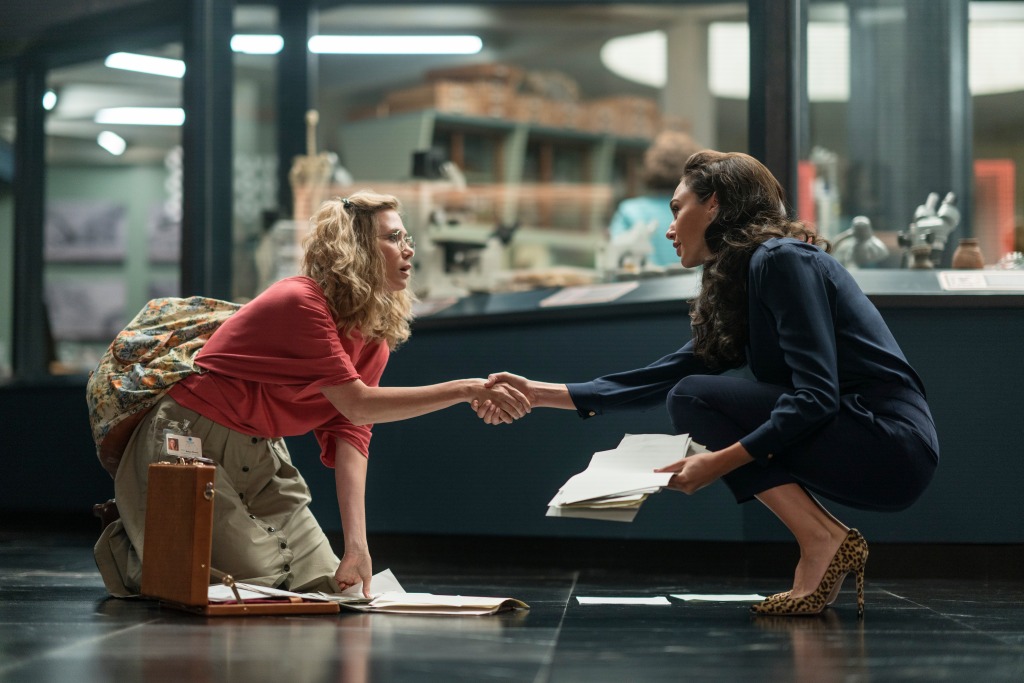 Kristen Wiig is a character and she was great. She starts as this intellectual property professor, who is only interested in her work.

Her character spends the night at the museum and she has this gym bag with her. So, we decided that her first t-shirt, the pomegranate outfit, was four inches longer and had a deep cuff at the waist so she could pull it down a bit to hide her legs.

In her gym bag, she manages to find these awful green heels which when paired with that top were a bit of a tizzy. But a shoe company called Gina did all of her shoes and boots.

Later in the film, Barbara goes to the fridge at night and discovers her strength. For that sequence, she’s in a t-shirt with a cat on the front, and that shirt is an homage to the fashion illustrator Antonio Lopez.

We go full ’80s which is the Jane Fonda workout look when she’s in the gym. Patty wanted that cut high, and it’s shocking to do that now, but that’s what people wore. Those glassy tights. 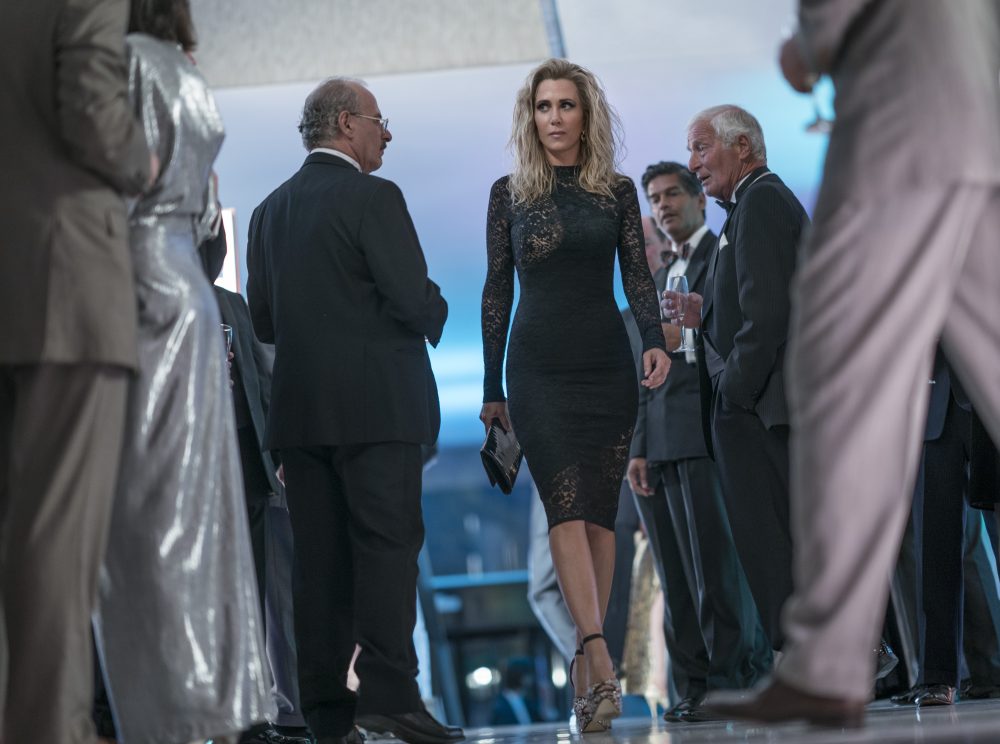 Barbara shows up in this black lace dress and she’s becoming body conscious at this point, and by the time she’s transforming deeper into Cheetah, she wears animal fabrics. We started with the shoes and that shaggy fur animal coat. Which is a copy of something I saw in the ‘80s in Camden Lock.

Sadly, in the end, I had to hand over to VFX for the Cheetah transformation, but all along, you’re setting up through her outfit and hair and shoes to that point.

His look was asking you to be brash and gaudy, like a mall in the ‘80s. And that’s what we did. My assistant, Nat Turner who’s a wonderful designer was a child of the ’80s and was into fashion.

I was horrified by some of those clothes, but he just kept encouraging me to go for it. We made all of Chris Pine’s clothing, from the zipped-up combats to the jacket with the push-up sleeves. When he wears the Members Only jacket over the white t-shirt — we made that ourselves. We bought a retro one and unpicked the logo and put it on our jacket. We did that because you have to go through hoops and hoops, but we still ended up using the one we made.