‘The day that divided Wordle’: Players are left baffled after an apparent glitch sees TWO different solutions depending on which site you use

Wordle players have been left baffled on Tuesday after an apparent glitch resulted in two different solutions depending on which site is used.

The online game is currently being migrated from the site of its original creator to the New York Times (NYT) website, following its purchase at the end of January.

Previously, to play the game, people had to go to powerlanguage.co.uk/wordle, but most people who enter this URL are now finding themselves redirected to the NYT website.

However, there are still some people able to play the game on the original website – an error that means there are two correct answers for Tuesday’s game.

Tuesday’s original answer was deemed ‘too obscure’ by the NYT, and so was replaced with another word with a fairly similar arrangement of letters.

Wordle, which only offers one puzzle per day to keep fans hooked, has amassed millions of players since it came online last October. 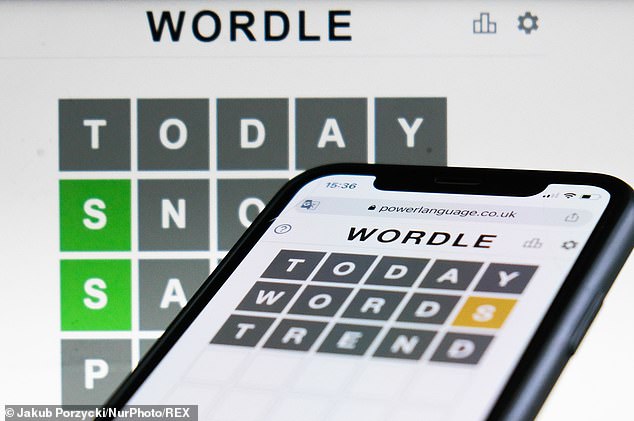 Wordle is deceptively simple; you have six chances to guess a five-letter word.

After each guess, each letter will turn green, yellow or grey, meaning:

You can then use these clues for your next guess.

It was created by Wales-born software engineer Josh Wardle for his girlfriend Palak Shah, who loves word puzzles.

At the beginning of November, the simple game – which involves guessing a five-letter word in six tries – had only 90 players; now there are said to be 3 million.

Due to its success, Wardle sold his creation to the NYT at the end of January for an undisclosed seven-figure sum, and the transition to the NYT website started last week.

Tuesday’s glitch was noticed by Caitlin Welsh, a regular Wordle player and editor for Mashable Australia.

‘When my partner and I both had all five tiles flip green, we compared notes and found that we’d wound up with different answers, both correct, for the first time in over a month of playing,’ she said.

‘It soon became clear that Wordle game 241 was actually two different games, depending on which version of the site you’re using.’

Welsh said she’s still playing the game on the original site – powerlanguage.co.uk/wordle, which was where creator Josh Wardle first uploaded the game for the public in October after initially only sharing it with family and friends.

MailOnline has contacted the New York Times regarding what they’ve done to prevent the issue from happening again, and if it will be deleting Wordle from the original website as part of the takeover.

The fact Wordle fans can still access the game on the original URL without it redirecting to the NYT website shows the transition is still ongoing.

NYT communications director Jordan Cohen has already told an Australian journalist that the original word for Tuesday was removed for being ‘too obscure’.

Twitter user @Zantareous described Tuesday as ‘the day that divided Wordle’, adding ‘Are you team ***** or team *****?’ in reference to Tuesday’s two answers (MailOnline has blurred these for fans who are yet to play the puzzle today

‘#WordleScandal’: Fans have been left confused by the two answers available to Wordle fans on Tuesday 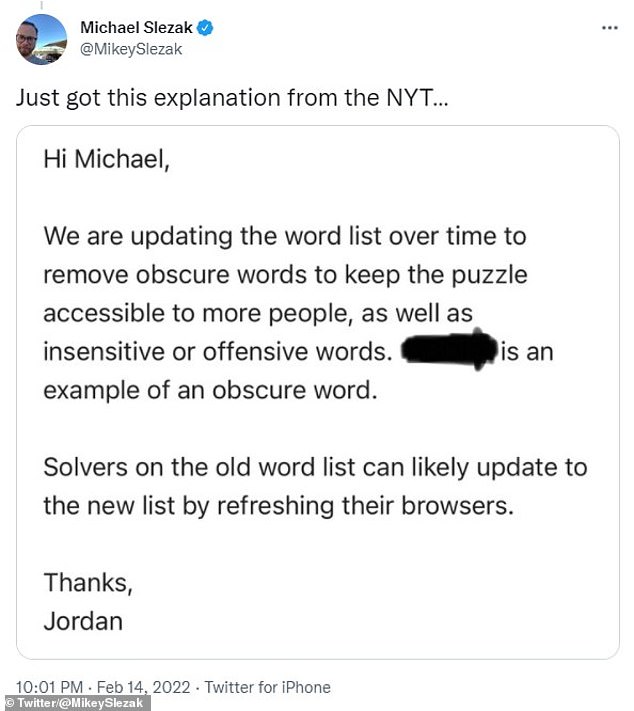 It’s been increasingly difficult to avoid Wordle spoilers on social media as the game’s popularity has soared.

But several internet boffins have been sharing long lists of upcoming answers after delving into the site’s source code.

Student Owen Yin has leaked the full list of answers on Medium.com. He claims there are enough answers in the website’s backend for the game to last until October 20, 2027.

Meanwhile, Robert Reichel, a software engineer currently at GitHub, has posted an entire blog on how he managed to pick apart the source code and get the right answer on the first try every day.

‘We are updating the word list over time to remove obscure words to keep the puzzle accessible to more people, as well as insensitive or offensive words,’ Cohen said in an email. ‘***** is an example of an obscure word.’

Many people around the world noticed the glitch and headed to Twitter to voice their displeasure.

Twitter user @Zantareous described Tuesday as ‘the day that divided Wordle’, adding ‘Are you team ***** or team *****?’

Another user, @judysuthrlandnz, called the whole issue a ‘#WordleScandal’, while @noelhurley tagged the official NYT Twitter acocunt to say ‘you seem to have broken Wordle’.

It’s also emerged this week that NYT has made other changes to the game since it’s taken it over.

According to BoingBoing, several words from the upcoming Wordle list have been removed – including ‘lynch’, ‘slave’ and ‘wench’.

NYT staff seem to have deemed these loaded terms that could cause offence, and therefore felt they had to go.

Other removed upcoming words include fibre (likely because this is the British spelling of the word, rather than the American spelling) and, rather more curiously, pupal.

Understandably, NYT has also removed some offensive racist and sexual slurs from the list of acceptable guesses, BoingBoing also claims. 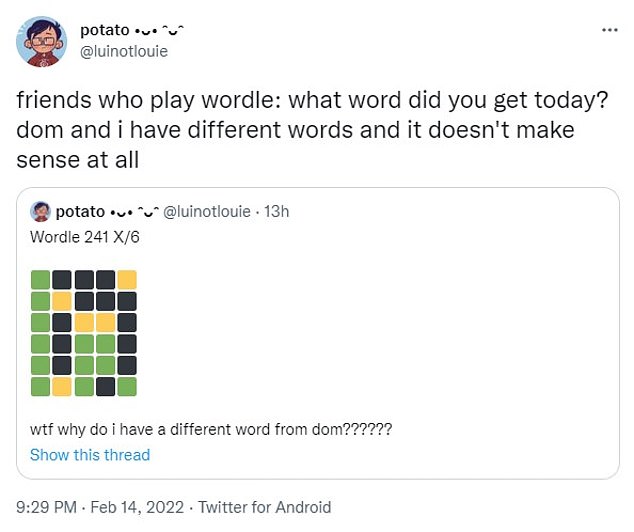 Wordle’s transition to the NYT website started last week – although the move was not without a few initial hiccups.

Players became very upset when it became clear the NYT had reset their winning streaks – the stat that shows how many games they’ve won in a row.

Wordle isn’t an app – it’s web browser-based – and players don’t have to login to a personal account on Wordle. Instead, their browser will remember their past performance including winning streaks.

One Twitter user, @JohnHeaner, wrote: ‘The Times screwed up this simple little pleasure faster than expected.’

Another Shanghai-based Wordle fan said she can no longer access the game because of China’s national firewall, which blocks the NYT website.

Yet another user, @stardustsummons, criticised the NYT for tweaking the Wordle user interface, which ‘made the logo ugly’. 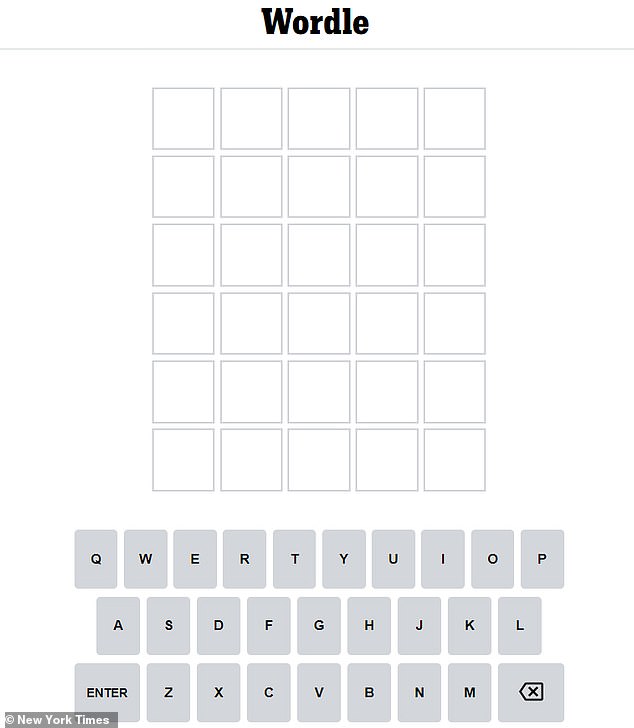 Pictured is the new user interface for Wordle on the New York Times website. One Wordle fan called it ‘ugly’

Since Wordle’s takeover, fans have expressed fears that it will go behind a paywall sooner or later, like much of the NYT’s website

NYT has said it will ‘initially remain free to new and existing players’.

Richard Mann, a British Wordle fan, data scientist and creator of maths-inspired game Nerdle, thinks there are various monetisation strategies NYT might use.

‘I wouldn’t bet on a pay wall – 99 per cent of users would vanish overnight – and I think NYT’s mini crossword is still free,’ he told MailOnline.

‘I suspect we’ll see promotions on the win screen soon – maybe encouraging an upgrade to a NYT subscription or premium access to other Wordle-like games.’

NO-ONE LIKES A SPOILSPORT! TWITTER BANS A BOT ACCOUNT THAT LEAKED THE ‘WORDLE’ ANSWER TO MILLIONS OF EAGER PLAYERS

In January, Twitter suspended a bot account that was spoiling the solution to the next day’s Wordle, the wildly popular online word puzzle.

The Twitter profile that called itself ‘The Wordlinator’ (@wordlinator) seemed determined to ruin the fun for players posting their scores.

It’s thought that the person behind the account found the upcoming winning words by simply looking at the Wordle web page’s source code.

The mean-spirited ‘Wordlinator’ automatically responded to accounts posting their Wordle scores with the message: ‘Guess what. People don’t care about your mediocre linguistic escapades. To teach you a lesson, tomorrow’s word is…’ followed by the next day’s answer.

One Wordle fan on Twitter said: ‘Just what kind of sick, twisted person do you have to be to hate the sight of people enjoying a harmless activity so much you hack Wordle?’