Their eldest daughter, who is two, has a Build-a-Bear with her late father’s voice that says “I Love You, Collette.”

Camryn Clifford opened up about her life two months after the shocking death of her husband, Landon Clifford.

In a new video posted on Thursday entitled “Life After Losing My Husband,” the YouTube star, 19, revealed how she and her two daughters — Collette Briar, two, and Delilah Rose, 5 months —  are coping with the loss of Landon, who died by suicide at the age of 19 after struggling with anxiety and depression.

“My life is completely different from the one that I lived with Landon, and I’m going to miss that life because I loved my life with him, even though it wasn’t always perfect,” Camryn began. “But I’m just learning to love my new life because I still have a life and my daughters still have a whole life to live.”

She explained that she and the girls moved in with her mom a few days after Landon’s funeral and are now temporarily living with her sister until they find something more permanent.

“Obviously this has been the hardest time and trying to cope with the loss of the love of my life while taking care of two kids — there’s days where it is so hard to get out of bed sometimes,” she continued. “But Delilah needs to eat. And Collette is asking me to make her pancakes and someone has to do it. And in times like that, I am really thankful for my sister.”

The help she receives from her family only makes Camryn realize how much Landon gave of himself.

“It really makes me appreciate all that Landon did for us,” she said with tears in her eyes. “He was so helpful, he loved being a dad out of everything. Like he just really loved being a dad. He was so good at it.”

On August 13, Camryn found Landon barely alive after hanging himself in their garage. He was taken to a hospital, declared brain dead and remained in a coma until his death. Now the teenage mom struggles with the idea of having to eventually discuss his absence to the girls.

“Collette is still really young and can’t fully comprehend the situation,” she explained. “All she really knows is that her dad’s gone. One day he’s here, one day he’s not. She has no idea where he went.”

“She’s too young to explain that to, even if I tried. One day, that’s a conversation I’m gonna have with her but as of right now, she just doesn’t get it. For the most part, she doesn’t really ask about him until there’s something that reminds her.”

Camryn went on to reveal how Collette will point to a picture of Landon and say “daddy.” The eldest daughter also gets confused, according to Camryn, by her Build-a-Bear that features a recording of Landon’s voice. 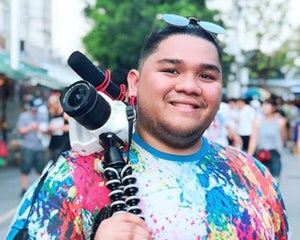 She added, “You can definitely tell she’s going through a hard time, though. She used to be very independent and since he left, she is very clingy to me and very anxious and is almost in a way that she thinks I’m just going to up and leave her too.”

As for how she is coping herself, Camryn has taken up painting, exercising, and writing poetry. But speaking with mental health professionals has been the most successful.

“Obviously I’ve been going to therapy,” she shared. “That is something that has helped a lot. I go once a week and then I also have a grief support group that I go to once a week. It’s just a room full of people who’ve lost someone special to them and we all just kind of lean on each other.”

“And it’s really good to hear that the way I’m grieving is normal,” she continued. “Everyone grieves so differently, but for someone to be talking about the way they feel and to relate to that and understand how it feels, it’s really helpful, especially when someone says something and I’m like, ‘Oh, I thought I was alone in that feeling.'”

She ended the video by letting her listeners know that they can overcome any hardship thrown their way.

“You can get through it and it’s not for nothing —  it’s growth.”

If you or someone you know is struggling with depression or has had thoughts of harming themselves or taking their own life, get help. The National Suicide Prevention Lifeline (1-800-273-8255) provides 24/7, free, confidential support for people in distress.