Storms have popped up in this record-breaking hurricane season at such a breakneck pace that forecasters ran out of names and were forced to move on the Greek alphabet. But one of the storms with a traditional name — Paulette — has come back to life more than a week after it hit Bermuda.

Paulette, which made landfall on Sept. 14 in Bermuda as a hurricane, regenerated near the Azores Tuesday, the National Hurricane Center said. Now a tropical storm, Paulette was expected to become a post-tropical remnant low in the next day or so.

The National Weather Service said on Twitter: “Because 2020, we now have Zombie Tropical Storms. Welcome back to the land of the living, Tropical Storm Paulette.”

As Paulette was weakening , Hurricane Teddy was moving toward Canada, with a predicted landfall in Nova Scotia early Wednesday before heading into Newfoundland on Wednesday night, forecasters said. The large and powerful storm was causing dangerous rip currents along the U.S. East Coast, the hurricane center said.

Teddy was about 300 miles south of Halifax, Nova Scotia, on Tuesday afternoon with maximum sustained winds of 100 mph. It was expected to weaken through Wednesday, but forecasters said it would likely be a strong, post-tropical cyclone when it moves in and over Nova Scotia.

The most obvious contributing factor for such an active season is water temperatures being near historic levels in the Tropical Atlantic, which can act like high-octane fuel to power hurricanes. 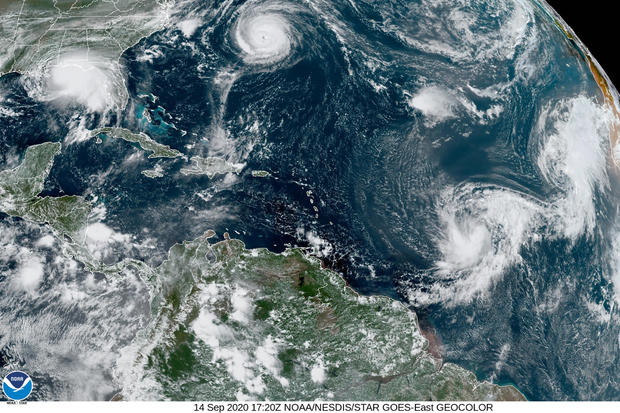 Meanwhile, the remnants of Tropical Storm Beta left large portions of Houston underwater. Cars and trucks stranded on roads-turned-rivers. What remains of Beta was hugging the coast late Tuesday and was expected to lash southeast Texas. Flood advisories are posted along a 500-mile stretch of the Gulf Coast from near Corpus Christi, Texas, all the way to New Orleans.

This storm is barely moving; it’s been raining non-stop since late Monday. And Houston — which floods even during a moderate rain — cannot absorb all this water.

More than 100 high-water rescues have taken place in Houston as the now-tropical depression barely budges.

“Let’s hope and pray that this system will start moving at a quicker pace to the east and will get out of here,” Houston Mayor Sylvester Turner said.