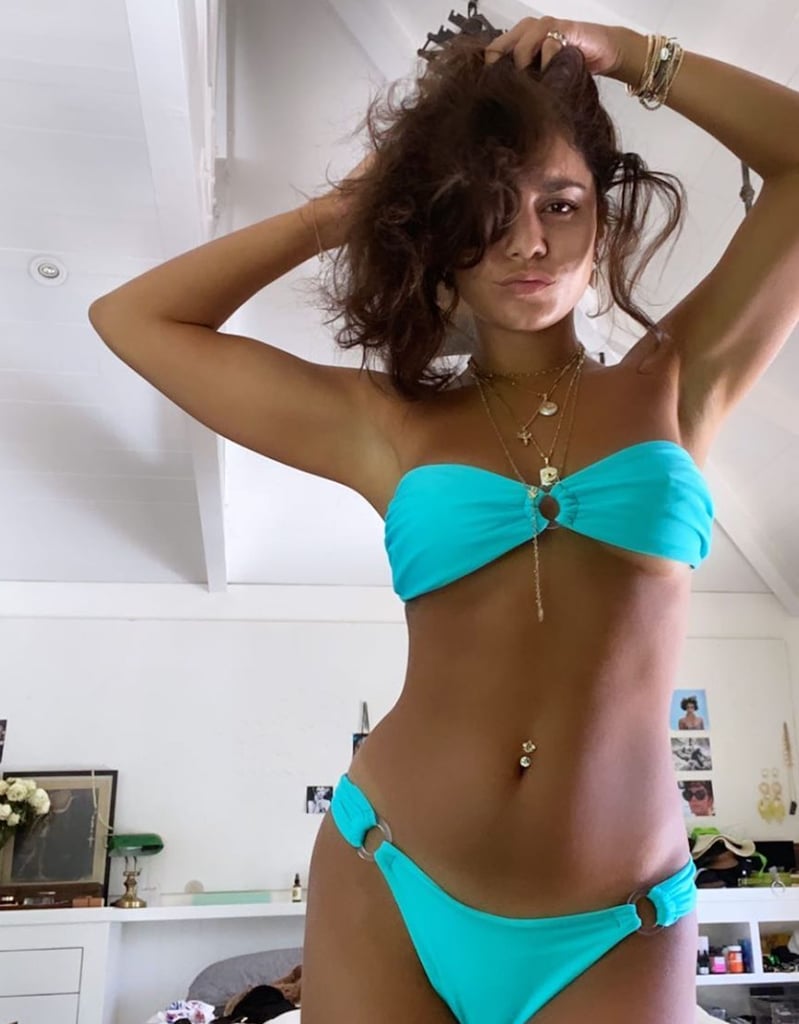 Vanessa Hudgens shared her at-home swimsuit style with followers, tagging the brand of her bikini in her Instagram Stories. I’m sure she figured fans would be curious, since her two-piece is undeniably sexy what with its barely there lucite rings and cheeky bottom. The Heart of Sun Gigi set retails for $144 and comes with a halter top that, as Vanessa later discovered, is pretty darn versatile and can be transformed into a bandeau with some rejiggering of the straps.

“Just realized I was wearing my bathing suit top wrong loool,” Vanessa wrote when she got inside and looked at herself in the mirror. I wouldn’t say either way is necessarily wrong, but in the case of this particular suit, it’s cool to see how different it can look with a simple tweak. So, Vanessa bought one bikini but wore it two ways — not a bad way to start off the swim season, huh?

Vanessa accessorized her look with a bunch of layered gold necklaces and bracelets, plus a pair of sunglasses and a scrunchie while she was sunbathing. Scroll through to see the swim moment in full, then pick up Vanessa’s exact design or another turquoise bikini in the same bright hue.

Vanessa Hudgens was ‘ready to sweat’ in quarantine with a new Instagram post she shared to her grid! The ‘High School Musical’ alum sported colorful, ombre workout pants and flaunted her sculpted abs in her latest boomerang pic!

Vanessa Hudgens is staying fit in quarantine! The stunning Spring Breakers star, 31, took to her Instagram account on May 13 and shared a sexy snap that featured the actress and singer sporting a black and yellow workout top and ombre style yoga pants, featuring hues of purple, yellow, and pink! Ever the fashionista, Vanessa layered a number of necklaces and bracelets along with her look and showed off her fresh, makeup-free face while posing up for the boomerang post! The actress, who appeared to have just finished a rigorous workout, teased another round of exercises she was going to tackle with Isaac Calpito as they raise money for No Kid Hungry! “GOING LIVE TOMORROW to get torch’d with [Isaac Calpito] and raise money for [No Kid Hungry] please join if you can!!! 8am pst/ 11am et,” she began the caption to her post, adding that fans should “be ready to sweat” during the May 14 Instagram live session!

When Vanessa isn’t working out, she’s been using her voice for a good cause — literally! On April 16, Vanessa reunited with her fellow High School Musical alums — Ashley Tisdale, Corbin Bleu, Monique Coleman and Lucas Grabeel — for a special rendition of “We’re All In This Together” from the iconic 2006 Disney Channel original movie during ABC’s Disney Family Singalong. Notably absent from the singalong was the TV movie’s star Zac Efron, who simply introduced the crew rather than sing along with them.

Vanessa has actually continued to give her longtime fans extra touches of nostalgia by singing more HSM songs in her own car! On April 25, the actress did her own episode of “careoke” by belting her part of the tune “Breaking Free.” As Zac’s character, Troy Bolton, sang “We’re soarin’, flyin’/There’s not a star in heaven/That we can’t reach,” Vanessa prepped for her verse as Gabriella Montez, and sang the 14-year-old tune as if it was 2006 all over again!

GOING LIVE TOMORROW to get torch’d with @isaacboots and raise money for @nokidhungry please join if you can!!! 8am pst/ 11am et 🥳 be ready to sweat 😉💪🏼🙏🏻✌🏼

During their time filming the High School Musical trilogy, Zac and Vanessa dated from 2005-2010. The couple was a main fixture for legions of fans, but they chose to call it quits roughly two years after the third HSM film was released in theaters. Since their split, both Vanessa and Zac have taken very different career paths. But the former couple appear to be thriving in their newfound success, taking each new project and personal endeavor one day at a time.