The “Big 4” streaming services — Netflix, Disney+, Hulu and Amazon Prime Video — have seen a noticeable jump in subscribers since February

Major streaming services have seen a significant increase in sign-ups since the coronavirus pandemic hit, according to new data shared by Hub Entertainment Research on Tuesday morning.

Overall, 28% of consumers polled by Hub said they’ve added at least one subscription to  the “Big 4” streaming services — Netflix, Disney+, Hulu and Amazon Prime Video — since February. That data comes from the firm’s new “Predicting the Post-Pandemic” study, which included 3,026 U.S. respondents, age 14-74, who watch at least an hour of TV each week; the data was collected in July.

Here’s a look at the spike in subscriptions for the services: 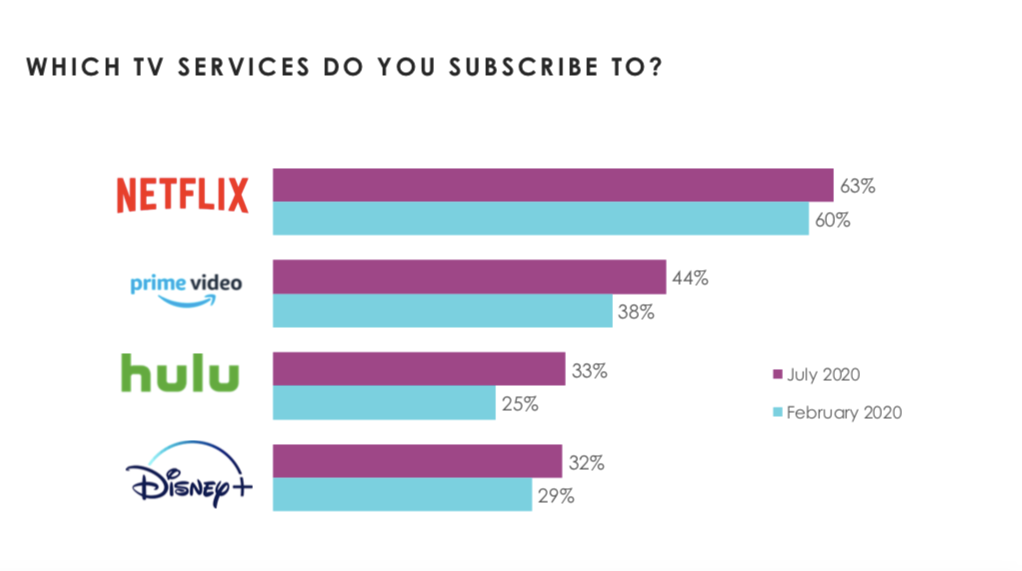 This probably doesn’t come as a surprise, with millions of people compelled to stay at home since March due to COVID-19. And recent earnings reports from these streamers support viewers are increasingly gravitating towards new services.

Disney recently reported Disney+ hit 60.5 million subscribers by early August, lapping both the company’s internal projections and analyst estimates for the service’s first-year performance. Netflix, meanwhile, sits at nearly 193 million subscribers worldwide, after adding another 10 million during the second quarter; Netflix’s subscriber gains put the company on target to eclipse their 2020 sign-ups goal by the end of Q3, thanks in large part to hit series like “Tiger King” hitting the service this year. And while Amazon guards its Prime Video stats carefully, another recent report indicates the service may have had the sharpest increase in Q2 subscribers out of anyone.

Streaming isn’t the only entertainment sector that’s benefited from lockdowns, either. Hub found Video on Demand viewing is up noticeably as well, with 26% of respondents saying the pay for at least one Pay-Per-View movie each week, compared to only 19% who did the same in February. Another 25% of respondents say they buy or rent at least one TV show each week, compared to 18% in February.