7 DC Comic Female Characters in the LGBTQ Community, From TV, Movies, and Comics

For queer fans of superheroes and comic books, it’s second nature to find parallels in the stories between LGBTQ communities and the whole secret identity thing. Comics and superheroes can be inherently queer, and that’s why it’s always so fun and great to see actual LGBTQ representation in these stories. Here are seven women in DC, through the comics and movies, and television series, that are part of the LGBTQ community.

Kate Kane, aka Batwoman, is a lesbian superhero. As we know her today, she came onto the DC comics scene in 2006. But, different versions of Batwoman have existed for longer than that, like Kathy Kane in the ‘60s. The 2006 origin story includes the fact that she was once training to be in the military, but was kicked out of her academy because of her sexuality and refusing to renounce it.

Her abilities include genius-level intellect, athleticism, and martial arts but like Batman, she doesn’t have actual superpowers but uses a Batsuit with special gadgets. She’s had several love interests, but at one point dated Reneé Montoya who we saw one iteration of her in the newest Birds of Prey movie played by Rosie Perez. In that 2020 film, Montoya was canonically lesbian as well.

You might have caught the innuendos in Wonder Woman (2017), where Diana suggests that men are unnecessary for sex, implying that the women on Themyscira are pretty fluid. And there was a lot of talk about Diana and Barbara’s chemistry in Wonder Woman 1984. But DCEU’s Wonder Woman isn’t canonically bisexual just yet.

However, the comic book Diana is pretty gay. Scratch that, really gay. For one, Wonder Woman’s conception came out of a polyamorous relationship between William Moulton Marston,  Elizabeth Holloway Marston, and Olive Byrne. While it’s not 100 percent certain that it was queer, the early comics all the way through the new ones showcase a very bisexual Diana. And in 2016, the subtext was thrown out when comic writer Greg Rucka officially told The Hollywood Reporter that Diana was bisexual. There are a lot of great gay moments where Diana subtly and not so subtly tells people she likes men and women, but the best might be in 2003 when she corrected reporters that she wasn’t looking for a boyfriend or a girlfriend.

Getting into the Arrowverse shows, and there are a ton of LGBTQ characters. There are a lot more outwardly stated gay characters that appear in The CW series than in the movies, and Sara Lance, aka White Canary, is an openly bisexual character. There are actually a ton of gay characters on Legends of Tomorrow, the show Sara (played by Caity Lotz) is primarily on even though she started off on Arrow, which came first.

Sara was super carefree, but once she gets lost after she and Oliver Queen’s boat got destroyed and went to train with the League of Assassins, she finds her purpose. She started off as just The Canary and a vigilante, but then she’s killed, resurrected, and went on to become White Canary. That last part comes at an immense cost.

She has relationships with men and women, she tends to prefer women, which still makes her a 100 percent valid bisexual character. While White Canary does exist in the comics, this exact version is only in the Arrowverse.

Unlike Sara Lance being in both comics and the Arrowverse, with tweaks to her character, Alex Danvers is a character that was created just for Supergirl, the show. She didn’t exist in the comics, but that doesn’t make her two-dimensional in comparison to anyone else. And she’s lesbian.

Alex doesn’t start off as a lesbian, though. The beginning of season 1 of Supergirl is very much about Kara coming to terms with the fact that she wants to start using her superpowers for helping people and essentially become a hero. Alex has to wrestle with that. But then once that settles, she starts to realize that she has feelings for Maggie Sawyer. But she never realized before that that she was gay. It makes for a very touching coming-out episode, and a storyline with an adult woman exploring her sexuality, which is nice to watch.

So, there’s Batwoman, and that’s not to be confused with Catwoman, although it’s kind of hard to do that once you put them side-by-side. Selina Kyle is a jewel thief in Gotham City who is a master at martial arts, cat burglary (obviously), and switching sides whenever it suits her as she’s a “villain” who helps Batman out sometimes. She is one of his girlfriends throughout his character’s many iterations, of course.

Selina Kyle is also very flirtatious; it’s in her nature and she has a very charismatic personality. When it comes to Batman, he can’t resist her charm, and she uses it to her advantage and not just with the Caped Crusader. While that can come off as open-ended sometimes with characters like Harley Quinn and Poison Ivy who are part of the LGBTQ community, her sexuality was confirmed as bisexual in 2015, according to The Guardian.

Poison Ivy probably has one of the most well-known queer, love stories in DC Comics with Harley Quinn, but it was very much not overt until quite recently (like, 2017 they had their first canon kiss as Autostraddle reported).

Poison Ivy’s origin story has changed a bit, depending on what version you’re reading or watching. But it’s similar to Harley’s in that she’s this brilliant doctor, a botanist, and she was seduced by Dr. Jason Woodrue, who goes on to become the Floronic Man. He starts experiments on her, injects her with chemicals that eventually turn her into Poison Ivy, and this is how she grows to hate humans, loves plants, and becomes a wildly powerful supervillain. 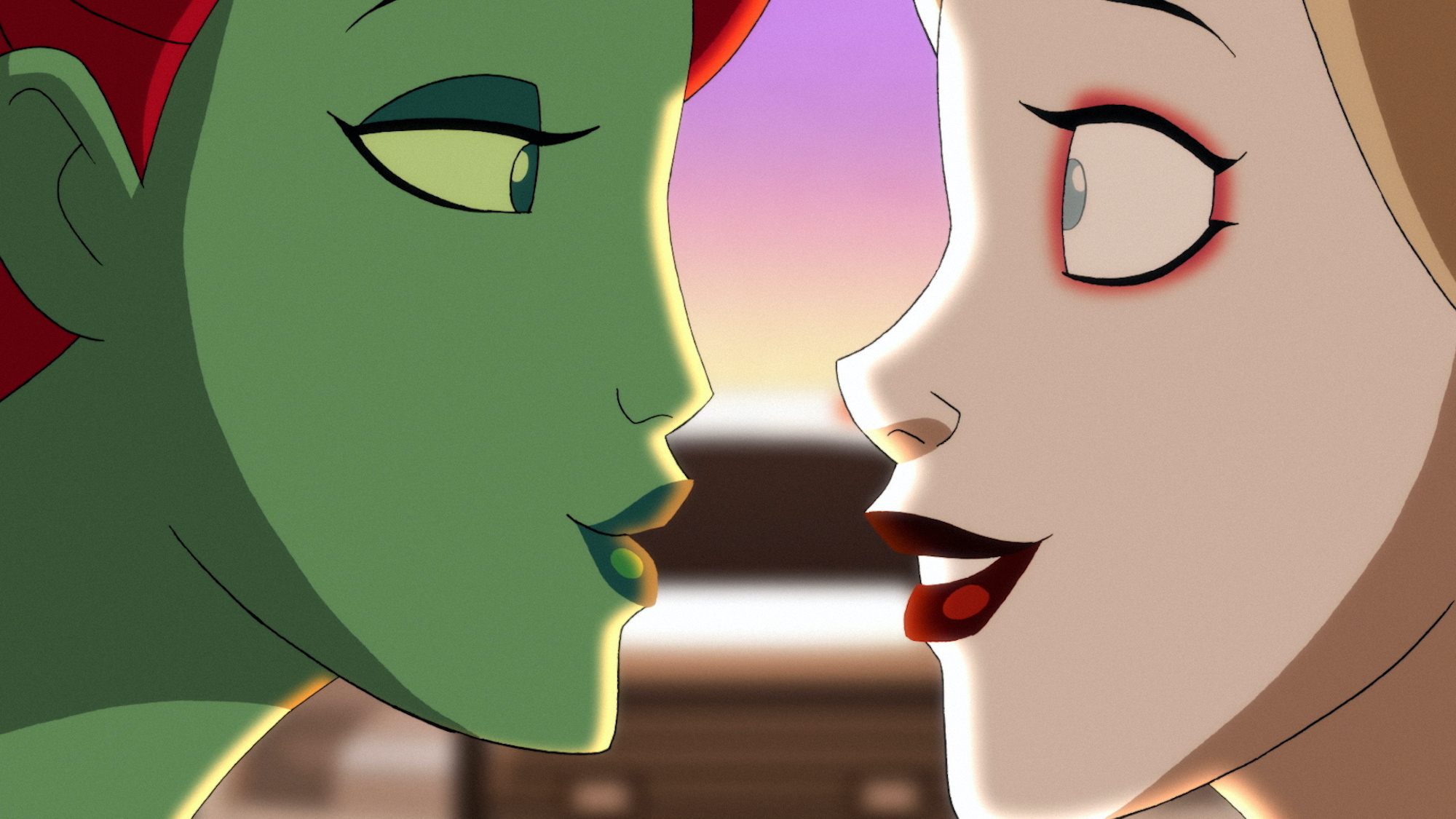 While, like Catwoman, she has immense charm because of her looks and her pheromones, her only really strong relationship has been with Harley Quinn. She’s been in love with Batman (or so she says) and kissed other men in her early days, but Harley Quinn and she have always been very close, even before they were outwardly girlfriends and even married in certain comics. Her sexuality isn’t stated in the comics but, again, she and Harley are definitely an item by now. She’s bisexual in the HBO Max adult animated series Harley Quinn, and Harley even tells her, “You’re here, you’re queer, get used to it,” after they hook up one night in season 2.

Getting into one of the most popular DC characters in recent years, Harley Quinn is just fun and full of life. Margot Robbie’s portrayal of her in 2016’s Suicide Squad definitely shot her to mainstream popularity, but the comics and her first carton appearance in Batman: The Animated Series in the ‘90s has always shown a witty, unstable, tenacious villain with a Brooklyn accent who’s fun to root for.

She’s infamously with Joker, but their relationship is highly toxic. He uses her as his punching bag and she’s not much better than his henchmen in his eyes. But she’s (literally) madly in love with him, and in most comics, doesn’t separate from him easily. However, her most influential relationship after Joker is with Poison Ivy, and it might be her healthiest. Well, in a lot of iterations, and as “healthy” as two villains can be.

The term bisexual might not be used, explicitly, with Harley Quinn, like with a lot of these comics, but she has boyfriends outside of Joker in different stories. She flirts a lot with other women as well, and in Birds of Prey, it shows that a woman broke her heart along with other men in college.