For “A Quiet Place Part II,” the sequel to the blockbuster alien invasion film, director John Krasinski emphasizes more action. And, with the passing of his father character at the end of the first film, turns deaf daughter Regan (Millicent Simmonds) into the protagonist. She becomes the film’s canny and determined hero, combatting the aliens with her hearing aid’s high-frequency audio feedback.

Krasinski also tapped a new cinematographer for his sequel: Polly Morgan (“Legion,” “Lucy in the Sky”) replaced Charlotte Bruus Christensen, and once again shot on film (using Panavision Panaflex Millennium XL2 cameras, Kodak Vision3 500T 5219 film stock, and T-Series anamorphic lenses). “John and I were both passionate about shooting on film,” she said. “But this felt more like a modern western, and, all during prep, we talked about ‘No Country for Old Men,’ ‘True Grit,’ and ‘There Will Be Blood.’”

In terms of lighting, they leaned into westerns that did not rely on modern practical sources, which made sense for this story, as there wasn’t much power left in upper New York state. “We relied on the warmth of the firelight, the candlelight, the moonlight, the ambient night,” said Morgan. “And, like the first film, we didn’t want it to feel post-apocalyptic in any way.” 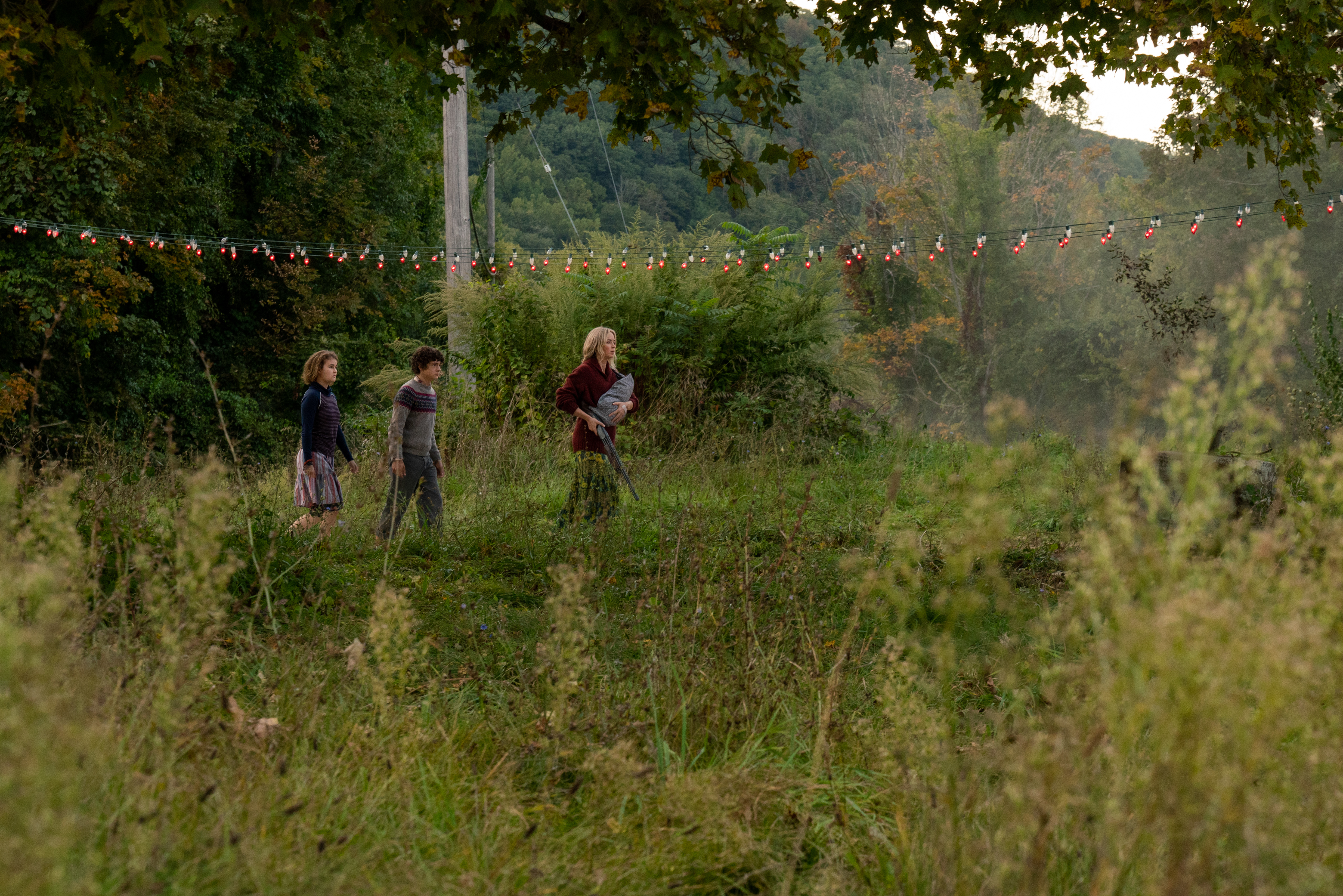 “Part II” continues the family survival drama as a hand off to the younger generation, with Krasinski continuing a warm sense of nostalgia for the natural environment. “We used color in the lighting to match the different sources that the characters were within,” Morgan continued. Colors pop and flesh tones are warm. “That’s the wonderful thing about shooting on film: when you’re capturing the highlights on foliage, for example, they can be very pleasing to the eye to preserve the warmth in the shoulder of the curve, how the highlights roll on and roll off. And it was all about these characters within the natural world and how it has taken over. An organic palette of the greens and browns was really strong.”

The sequel kicks off with a suspenseful flashback to “Day One” of the alien invasion a year earlier, setting the tone of normality being subverted by terror. It also establishes a different visual approach from the first film: Krasinski has the camera constantly moving with the Abbotts. It begins with the family gathered at a playground to watch a baseball game with the eldest son, Marcus (Noah Jupe), trying to overcome his jitters. The monsters land and start attacking, and Lee (Krasinski) struggles to get to his car, while Evelyn (Emily Blunt) drives the kids through the town, dodging the oncoming aliens. To achieve the propulsive action, Morgan relies on a series of long single takes, using several tracking vehicles and different camera mounts, including jibs, cranes, and Steadicam vests, with the vehicles traveling at full speed.

“We decided these long shots would be part of the language of the sequel,” Morgan said. “On the first movie they employed long lenses to create intimacy along with macro shots. On this movie, there was an expansion of the world, and the characters are embracing uncharted territory. It was inspired by Steven Spielberg, who is John’s hero. Whoever was in jeopardy, and what was causing jeopardy, would be in the same shot. You got to involve the viewer in the experience as subjectively as possible without cutting away. It was like ‘Jurassic Park.’” 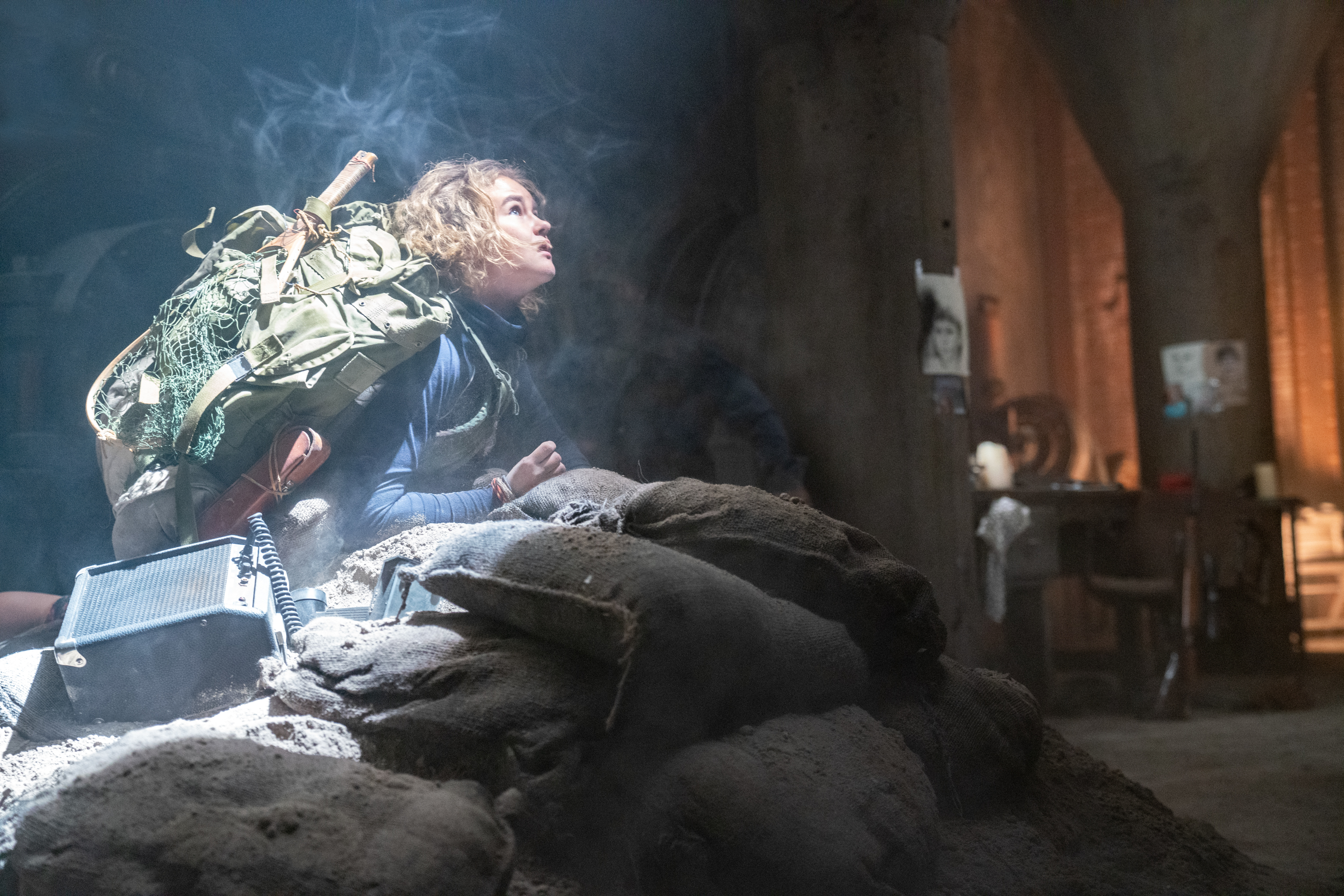 The midpoint centerpiece cross-cuts between three parallel action sequences: Regan confronts an alien in a wrecked train; Evelyn walks to the local pharmacy to get medical supplies; and Marcus plays cat and mouse with an alien in an abandoned steel mill while trying to take care of his infant brother. “Even though we never storyboarded or created a shot list, John and I would spent prep at the locations talking about camera,” Morgan said. “It was all in John’s mind. The theme for the first film was parents protecting their children; this movie is about the children growing up, learning to fight for themselves, and dealing with the loss of their father.”

However, shooting inside a furnace set as a bunker for the Abbott family proved difficult because of its small size. Production designer Jess Gonchor built three different sizes, with removable front and back and sections pulled out. “Often we were on a jib arm with small remote heads on the end of it,” added Morgan, “and we would literally push in and out through the tube with the characters as they entered and exited. It was like a scene out of ‘Alien.’”

However, it was not only a tight squeeze, but also difficult using such wide anamorphic lenses. They relied on Panavision to modify the lenses to get closer to the actors. “Unless there was candlelight, it wasn’t motivated by any source in particular,” Morgan said. “We used tiny LED light mats with velcro and hid them on the rivets, and drilled a hole and ran cable from the outside. What was so wonderful and challenging was that because there was so much dynamic movement by the actors, John wanted to make sure the camera was moving all the time. I literally had to be ready to start every shot on a wide and push in to the closeup. John wanted that dramatic immersion.”