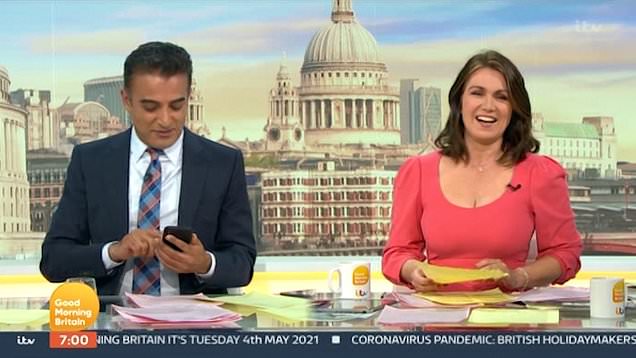 Adil Ray has joined the queue of eligible bachelors hoping to date Melinda Gates, just hours after her divorce from husband Bill Gates was announced.

Bill and Melinda announced they had split after 27 years of marriage in a joint statement on Monday.

The former couple stated they were no longer able to ‘grow together’ and would be going their separate ways.

It didn’t escape Adil, who jokingly said he would be making a beeline for Melinda, who is likely a very rich woman with Bill currently the fourth richest man with an estimated net worth of $124billion (£89bn).

Discussing the shocking split on Tuesday’s Good Morning Britain, Adil said: ‘Once the dust settles and everything’s calm, they’ll both be back on the dating scene, they’ll both be very popular, won’t they?’

Susanna Reid was momentarily speechless before stating: ‘Let’s just give them a moment, shall we? Just to process the split.’

Adil laughed: ‘I did say when the dust settles,’ before grabbing his phone and joking: ‘I was going to check if Melinda’s on Instagram.’

Luckily for Adil, Melinda is indeed an Instagram user but she’ll likely be too preoccupied to notice him sliding in her DMs at the moment.

Microsoft founder Bill met Melinda at a trade show in New York and began dating in 1987. Their wedding was on New Year’s Day in 1994 in Hawaii.

In their joint statement, the pair said that they ‘raised three incredible children’ and ‘built a foundation that works all over the world to enable all people to lead healthy, productive lives’, referring to the Bill & Melinda Gates Foundation.

‘We continue to share a belief in that mission and will continue our work together at the foundation but we no longer believe we can grow together as a couple in this next phase of our lives,’ the philanthropists stated.

Good Morning Britain airs weekdays at 6am on ITV.