Home » TV and Movies » All American Premiere Recap: What Happens in Vegas? (Plus, Grade It!)

All American Premiere Recap: What Happens in Vegas? (Plus, Grade It!)

All American Spinoff Eyed at The CW

It appears Spencer James took quite a gamble in Las Vegas over the summer, and he’s playing with something much more valuable than plastic chips.

All American returned for Season 3 on Monday, bringing with it a whole new set of problems for Spencer and his social circle. For one, Spencer’s back at South Crenshaw High (a transition that didn’t go quite as smoothly as Spencer would have preferred), and his arm is still giving him trouble after last season’s injury. But here’s the bigger question: What happened with Olivia?

The premiere picks up at the start of Spencer’s senior year, and the summer event that everyone’s talking about is the road trip that Spencer and his Beverly High friends took to Las Vegas, where Coop was performing on her tour with Layla. And something must have transpired on that trip between Spencer and Olivia — the latter of whom is still dating Asher, who was on a cruise with his mom all summer — because they can barely make eye contact now.

Spencer calls Olivia out for avoiding him as summer came to a close, and when she counters that he didn’t exactly come looking for her, he says he wanted to give her space. “That’s the right call,” Olivia eventually concedes before running into Asher’s arms when he gets back from his cruise. But later, when Spencer stops by the Bakers’ house to look for Jordan, he runs into Olivia again, and it’s even more painfully uncomfortable between them, which Asher seems to notice. (He also notices that Olivia’s oddly cagey about how she spent her summer.) 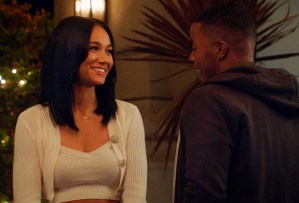 Meanwhile, there’s Layla, who seems to have rekindled her flame with Spencer during that same Vegas trip. She and Spencer meet for a face-to-face chat after she gets home from the Coop tour, and she starts by saying their quality time in Vegas doesn’t have to be a big deal. “It was a big deal to me,” Spencer tells her, and they kiss, seemingly getting back together on the spot. But when Olivia notices that Layla and Spencer are an item again, Layla admits they hooked up in Vegas, and Olivia immediately blanches. Two things of note here: Olivia had told her friends she was staying in Los Angeles to help a Sober Sister while the rest of the group went to Vegas, which obviously wasn’t entirely true; and when the show briefly flashes back to the Vegas trip, we see glimpses of Spencer hooking up with a girl, but we never actually see her face.

As the hour winds down, Olivia overhears Spencer confessing to Coach Baker that his arm is still acting up (more on that later), and she gives Spencer a proud hug for telling the truth. But they immediately notice how close they are to one another, and Spencer asks, “Liv, we’re just not gonna talk about what happened this summer?” And the episode ends there!

Elsewhere in the premiere…

* Upon transferring back to South Crenshaw, Spencer does an interview with the Los Angeles Tribune where he’s bombarded with questions about why he abandoned Beverly High. Spencer’s eventual, frustrated response — “Beverly is my past, South Crenshaw is my future” — is taken out of context when the article runs, and Jordan is among the Beverly High teammates who give Spencer the cold shoulder after it’s published; the tension later mounts so much that Jordan punches Spencer in the face, and when Spencer hits him back, it looks as though his arm has gone numb again.

Spencer later admits to Coach Baker that he did lose feeling in his arm during the fight, and that’s the first time it’s happened all summer; Billy, for his part, tries to calm Spencer’s anxiety about how this could ruin his season, promising to get Spencer checked out by one of the best doctors in the league. As for the Jordan dust-up, Spencer gets some tough love from younger brother Dillon, who points out that Spencer’s transfer back to Crenshaw likely made Jordan feel as though he’d unceremoniously lost a brother; that night, Spencer leaves Jordan a voicemail, reminding him that their brotherhood remains the same no matter where Spencer’s playing football. 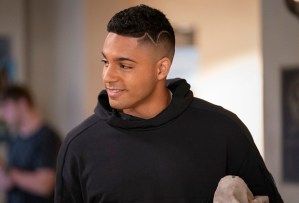 * Jordan is otherwise preoccupied with girlfriend (and possible subject of an All American spinoff!) Simone, who goes into labor at the start of the premiere. But Simone gives the baby up for adoption, and she doesn’t even hold her son upon giving birth, assuming it’d be too hard to hold him and then part with him. Plus, she won’t even answer Jordan’s calls, because what if he hates her for giving up a child he loved, even though he wasn’t the father?

Simone’s dad is the voice of reason here, telling Simone that she’s not giving Jordan enough credit. And when he visits the nursery to meet his grandson, Simone’s dad ends up meeting the baby’s adoptive father, who’s so thrilled to finally have a son after his wife struggled to carry a child to term. They’ve named the baby Shay, and Simone’s dad takes photos of the infant, which he later shows to Simone when she’s ready to know more about her baby. She also calls Jordan, apologizing for pushing him away, and he rushes up to her hospital room to love on her.

* Upon getting home from her summer tour, Coop learns that Tyrone’s older sister, an attorney named Monique, is back in Crenshaw, and she’s worried that Monique wants some kind of violent revenge on her. But in the episode’s biggest subversion of expectations, Monique meets up with Coop and tells her she wants to make amends; she was interested in revenge when she first came back to town, but she realized over the summer that Tyrone terrorized the community, and Monique didn’t protect Tyrone from the gang lifestyle like she should have.

To prove her intentions are legit, Monique reveals that she got Preach released from prison, after she successfully got a years-ago marijuana charge overturned, making Preach’s latest conviction a second strike instead of a third. “And if you’ll let me,” Monique tells Coop, “I’d like to keep making amends.” (All parties in favor of this storyline instead of the revenge plot we thought was coming, say aye!)

Meanwhile, it’s revealed that Coop’s girlfriend, Patience, came home early from the summer tour — and that decision had something to do with Layla’s father. JP Keating “takes cutthroat to a whole ‘nother level,” Patience tells Coop, “and Layla’s dad isn’t who y’all think he is.”

* Finally, there’s Billy, who’s admittedly a bit nervous to be back coaching Crenshaw football; Crenshaw’s potential transformation into a magnet school is only getting delayed by a year, so there’s a lot riding on Billy and Spencer’s performance this season.

Unfortunately for Billy, Crenshaw’s interim principal is D’Angelo Carter, a former Crenshaw student who was mercilessly bullied by Billy, Corey and the rest of the football team; things got so bad that D’Angelo ultimately transferred to boarding school after his freshman year. After getting reminded of how poorly he treated D’Angelo, Billy sincerely apologizes to him, insisting he’s a much different man than he was in high school. But even though D’Angelo can put the bullying behind him, he says he can’t forgive having to leave his family and go to boarding school “because of Billy Baker and his bright future.” To that end, D’Angelo has raised the GPA requirement for all athletic participation at the high school. “Crenshaw will become synonymous with academic excellence,” he tells Billy, warning, “Good luck scraping your team together.”

OK, your turn! What did you think of All American‘s return? Grade it in our poll below, then drop a comment with your thoughts!