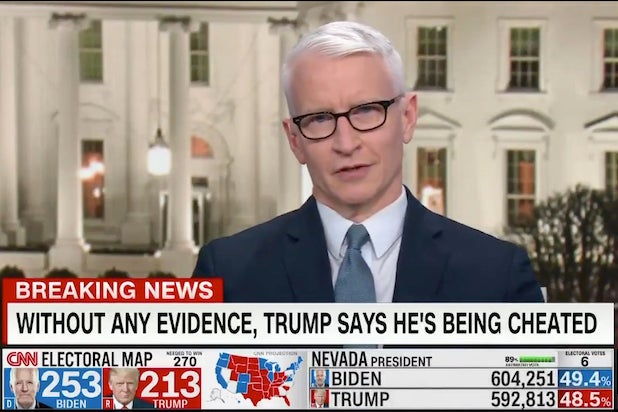 CNN’s Anderson Cooper compared President Donald Trump to an “obese turtle on his back flailing in the hot sun” after his misleading, falsehood-ridden remarks at a press briefing on Thursday.

“That is the president of the United States. That is the most powerful person in the world, and we see him like an obese turtle on his back flailing in the hot sun, realizing his time is over, but he just hasn’t accepted it and he wants to take everyone down with him, including this country,” Cooper said.

“I don’t think we’ve ever seen anything like this from a president of the United States and I think as Jake [Tapper] said, it’s sad and it is truly pathetic and, of course, it is dangerous and, of course, it will go to courts, but you’ll notice the president did not have any evidence presented at all. Nothing. No real, actual evidence of any kind of fraud,” the CNN anchor also said.

Trump’s Thursday evening remarks — in which he baselessly said he was being cheated in the election, spread misinformation about voter fraud and falsely claimed he won the election if only the “legal” votes were counted — were interrupted on multiple networks as anchors and correspondents leaped in to fact-check the president’s statements.

“We have to interrupt here because the president has made a number of false statements, including the notion that there has been fraudulent voting. There has been no evidence of that,” NBC News’ Lester Holt said.

“We’re not going to allow it to keep going because it’s not true,” CNBC’s Shepard Smith said as his network interrupted Trump’s remarks.