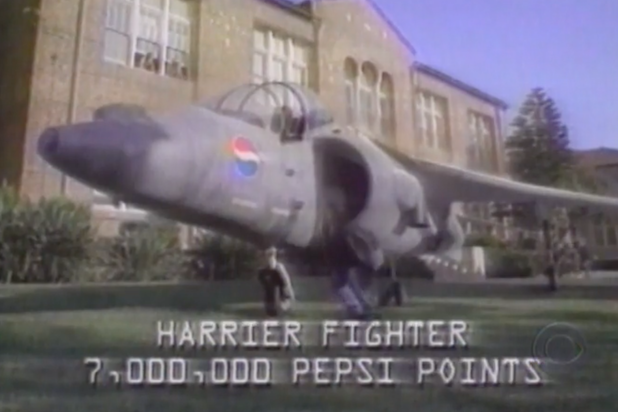 Apple has ordered a docuseries about the story behind that infamous ’90s Pepsi campaign that advertised a Harriet Jet as a prize — and you won’t need any Pepsi Points to watch it, just an Apple TV+ subscription.

Per the streaming service’s description, “The Jet” tells the compelling true story behind the iconic “Drink Pepsi, Get Stuff” promotional campaign that presented a Harrier Jet at the end of a 1996 TV commercial in exchange for 7 million Pepsi Points.

The docuseries, which comes from the Emmy-nominated filmmakers of HBO’s “McMillion$,” James Lee Hernandez and Brian Lazarte, “promises to be an entertaining and nostalgic deep dive into 1990s pop culture and the events that transpired after someone attempted to cash in their points for a Harrier fighter jet.”

That someone was John Leonard, who ended up suing PepsiCo, Inc. in a contracts case tried in 1999, in an attempt to effort to enforce Pepsi’s “offer” to redeem 7 million Pepsi Points for that AV-8 Harrier II jump jet. At the time, the jet was valued at $33.8 million.

Leonard’s claims were rejected by the court, and though Pepsi continued to air the commercial, the company added a “Just Kidding” disclaimer to the ad and upped the cost of the Harrier Jet to 700 million Pepsi Points.

Hernandez and Lazarte will direct and executive produce “The Jet” through their FunMeter banner.

The pair and their and Fun Meter banner are repped by UTA, Management 360, and attorneys Brian Raymond and Sean T. Faussett at Raymond Legal.