The first film from a former star of “The Office” is a dark comedy about life in a nation that’s not as divided as we might think.

“I thought that these huge dudes with beards and pickup trucks would be very suspicious of a Hollywood blue-state guy, and I found the exact opposite,” B.J. Novak said of his research trips to Texas. Credit…Erik Tanner for The New York Times

A funny story that B.J. Novak likes to tell from the making of his new movie is about the day he thought he was having a stroke. Are you chuckling yet?

At the start of 2020, Novak, a writer, comedian and alumnus of “The Office,” had finally gotten the green light to make “Vengeance,” a dark comedy set in small-town Texas. That’s when he thought he was slurring his speech and called a colleague to ask if he was noticing it, too.

As Novak recalled, “I was like, you hear that, don’t you? And he said, I do. And I called my doctor and went in the next morning for an M.R.I., and they said you’re fine, and I realized I’m terrified to make this movie.”

Like a lot of the humor that appeals to Novak — whose symptoms, rest assured, were completely psychosomatic — what’s funny about this story is a matter of perspective. You can laugh at it in relief, when you know the person telling it is no longer in danger.

This is a theme that comes up frequently in “Vengeance,” which blends some of the awkward cringe comedy that “The Office” was famous for with a knowing, cynical sharpness that would never fly in the hallways of Dunder Mifflin.

The film, which opens Friday, is Novak’s debut as a feature director and screenwriter, and he stars in it as Ben Manalowitz, a self-assured New York writer. When Ben learns that a woman he dated casually — very casually — has died under hazy circumstances in her Texas hometown, he travels there in hopes of turning the story into a hit podcast.

Though Ben arrives with selfish motives and a stereotypical sense of red-state values, he grows enamored of the dead woman’s family (played by Boyd Holbrook, J. Smith-Cameron, Isabella Amara and Dove Cameron, among others). His investigation also leads him to an astute record producer (Ashton Kutcher) who exerts an ominous influence over the town. 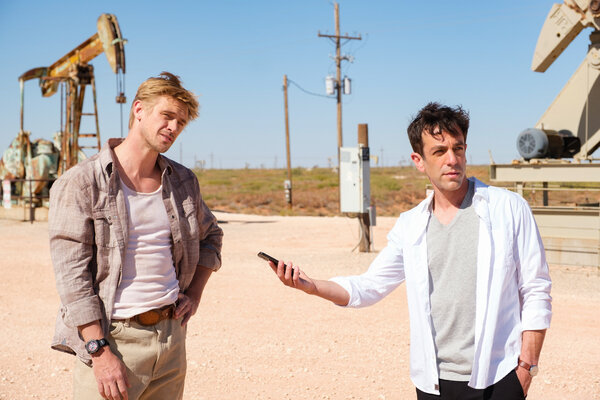 For Novak, “Vengeance” is an ambitious attempt to step out of his sitcom comfort zone and see if he can make it as an Albert Brooks-like leading man. As he said of his acting résumé, which has included small roles in “Inglourious Basterds” and other films, “I’m very much a reaction-shot guy. I’ve never been a point-of-view character.”

“Vengeance” is also one of a small number of original comedies that will receive a theatrical release, and getting it made required a level of commitment that Novak had never expected.

“I really felt like a madman on the corner,” he said. “I’m going to star in this movie, and it’s a comedy but also a thriller but also a love story. But it’s also about how technology does this to us. I really thought I was nuts, but I kept going.”

One afternoon in June, Novak was relaxing in the patio of a hotel in downtown Manhattan, where he’d presented “Vengeance” at the Tribeca Festival. For the first time in several months, Novak said, “I haven’t been under some terrible cloud of writing and editing and fighting. I really like it.”

Face to face, Novak, who turns 43 on July 31, comes across as easygoing and effortlessly humorous. Describing his life as a Boston-area transplant now residing in Los Angeles, he said, “Everyone in L.A. assumes I live in New York, which I take to mean: You’re Jewish, right? Or, I haven’t seen you in a while.”

But there’s an intensity that colors all his anecdotes about “Vengeance,” whose central premise he had been kicking around for several years.

“We live in divided times, quote-unquote, because we communicate completely on our own timelines,” he said. “It was from my experience dating and being a somewhat shallow person who didn’t really know what he was missing until it was too late.”

Novak added, “Every year that went by, it became a more topical film, which I didn’t ever intend it to be.”

Between 2015 and 2018, Novak said, he took research trips to Texas cities like Abilene and Pecos, seeking to dispel his misconceptions about a part of the country he assumed would be unwelcoming.

“I thought that these huge dudes with beards and pickup trucks would be very suspicious of a Hollywood blue-state guy, and I found the exact opposite,” he said. “It’s the warmest culture I ever found. I went to Easter dinners and people would show me the poetry they had written.”

Novak returned from his travels with the foundation for what would become “Vengeance,” and with the intention that he would play the lead. “I wrote the role to be impossible to cast with anyone but me,” he said. “You know, superficial with a possible hidden heart, blah blah blah.”

Though the movie can be equally scathing in its satirical treatment of snobbish urbanites and credulous country folk, Novak said that the “Vengeance” screenplay benefited from lessons he learned while working on “The Office.”

In particular, he said the sitcom taught him “the confidence to throw away your best joke if it didn’t feel authentic or damaged the character long-term — if you play an emotional moment honestly, the laugh will be more satisfying later.”

That said, Novak also had to remind himself it was OK to depict his “Vengeance” character with some positive attributes — an approach he would have never taken at “The Office,” on which he, Mindy Kaling, Paul Lieberstein and other writers portrayed its supporting miscreants.

On that show, Novak said, “We were too shy to pitch anything redeeming, so we played the least redeeming characters. We were all allergic to that in the writers’ room.”

The cast for “Vengeance” grew to include Issa Rae, who plays a podcast producer Ben is hoping to impress; the singer-songwriter John Mayer, who plays one of Ben’s self-centered New York friends; and Kutcher, who previously employed Novak as an on-camera accomplice for his MTV prank series, “Punk’D.”

Kutcher said he was particularly impressed with a long monologue that his character delivered, about people who seem to care less about the lives they lead than the digital records of them that they leave behind.

“When you look at human behavior, and the obsessive nature of chasing that dopamine hit from posting every moment we think is interesting or cool or funny, you realize his theory has merit,” Kutcher said.

Also, Kutcher said, he appreciated that Novak was open to letting him play his character with a mustache. “I just saw him having a mustache. I don’t know why,” Kutcher said.

But as production moved forward, Novak became increasingly anxious about feeling that he had to carry the movie as the leading man, setting off his panic attack. It was in this time that he reached out to Mayer for what Novak described as “handsomeness coaching.”

Mayer has been a longtime friend of Novak’s, dating to “The Office.” (In an email, Mayer explained that he allowed the show to use his song “Your Body Is a Wonderland” in return for a Dundie Award.)

Mayer said he could not remember all the suggestions he offered Novak, but one of them was to give up alcohol before he started shooting. “First and foremost, you have to put drinking away,” Mayer said. “I know people wince just hearing that stuff. But that’s the truth.”

He continued, “I think I mentioned getting the right haircut, basic stuff. But how sweet and vulnerable is that, for B.J. to ask before filming what advice I could give him?”

A few weeks into filming, production was suspended for several months because of the pandemic. At times Novak found himself juggling duties on the film and his FX on Hulu anthology series “The Premise.”

“I filmed the FX show and then I went back to filming ‘Vengeance,’” he started to say, then corrected himself. “No, I was editing ‘Vengeance’ while I was writing. It was a mess, and I had Covid.”

“I took extra time, because I was writing poorly and editing poorly because my brain was bad for a few weeks,” he said. “They were both going badly at various points because I couldn’t balance them and I thought I could.”

Now “Vengeance” arrives in theaters on the heels of the blockbusters “Top Gun: Maverick,” “Jurassic World Dominion” and “Thor: Love and Thunder,” at a time when many other low-budget comedies and dramas about more earthbound matters are being released directly to streaming platforms.

Jason Blum, the chief executive of Blumhouse, one of the companies that produced “Vengeance,” said the film could have just as easily received a streaming release.

“I can’t tell you we didn’t contemplate that during the pandemic,” he said. “We contemplated every possible distribution outlet, ever.”

But, Blum said, his company has had success with films from writer-directors who blended comedy and thriller genres, like Jordan Peele’s “Get Out,” and he was hopeful that “Vengeance” might find a similar lane.

“This movie is exactly the kind of movie that people say they want to see,” Blum said. “If it does well, it’ll open a path to put other original movies in theaters, too, not just movies based on existing intellectual property.”

For Novak, the theatrical release is an opportunity to show “Vengeance” to the same people he hopes it captures, and to determine if they appreciate how he has depicted them.

“I really want Texans to like it,” he said. “I wanted to make this Texans’ favorite movie. I even put a Whataburger in it. I remember seeing Dunkin’ Donuts in ‘Good Will Hunting.’ As a Bostonian, you just felt so seen.”