Tipping Point has been on screens since 2012 and since it’s inauguration it has made hundreds of people thousands of pounds richer. During the four series of the popular game show, a contestant made a new record when she won the jackpot prize with only five counter drops.

Contestants Wade, Clare, Mal and Jenna joined host Ben Shephard for episode two series four and those watching at home saw Clare dominate the game and make it to the final.

“Let’s have a look at the categories please; Animals, Technology, Literature, Food and Drink, The Olympics, Film,” Ben read out.

“We can play them in any order you like, when you’re ready give me your first one and how many counters.”

Clare said: “I’m going start off with something I think I’m quite confident, but I might want to eat my words. I’m going to go for food and drink please… I’m going to try three.” 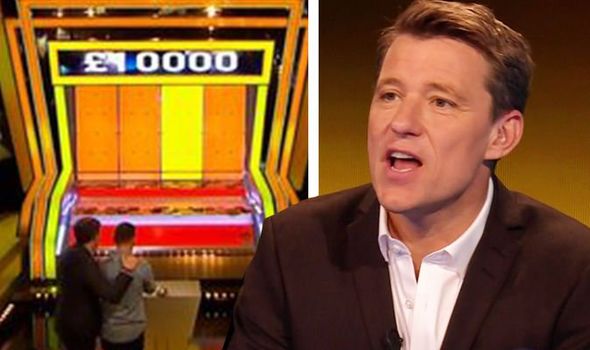 “We’ll have a food and drink question for three counters to get us started please,” Ben remarked and the first question was given.

“Which drink is known as ‘Nelson’s Blood’ because it was thought he was preserved in it after the Battle of Trafalgar?” Ben read out and the multiple choice answers were: “Tequila, rum or whisky.”

“I hope it’s a logical answer – being a sailor – I doubt very much if it’s tequila. But I think I’m going to try rum,” Clare opted and the machine lit up green.

“Absolutely right! Three counters to get started,” Ben said and drop zone four was requested and fired up.

The counter shot down the zone and sat flatly behind the jackpot counter: “That is rather special drop for the first one, give it a good nudge now!” Ben remarked and four counters tipped over the edge.

The second and third counter were then dropped from zone four and pushed the jackpot counter to the lower deck.

Clare then chose animals for her second category and for three counters.

“What is an alternative name for woodchuck?” She was asked and the options were: “Groundhog, max or polecat.”

“I think it might be ground hog,” Clare explained. “I’m thinking of a film Groundhog Day, I could be completely wrong, but I think the woodchuck is called Pete. I don’t know!”

“Shall we light up groundhog?” Ben encouraged and the machine lit up green indicating the right answer again.

And three counters were then dropped into zone four.

“Your jackpot counter – in just four drops – is on the tipping point. The record we’ve had it out is eight [counters],” Ben commented.

“This is extraordinary, you’ve got two more to put in.”

The atmosphere was very tense, Ben remarked: “Oh my goodness,” as the machine lit up and a counter dropped.

“Is it a Tipping Point record?” Ben asked and Clare screamed as the jackpot counter was pushed over the edge.

“Oh my goodness me! What a result,” the host stated. “How are you feeling?”

“Can you tell I’m a bit happy? That’s amazing, absolutely nuts! Not for one second did I think I would end up with £10,000,” Clare revealed.