Hollywood’s obsession with superhero reboots shows no sign of letting up. By this time next year, “The Batman” will have brought the origin story of the caped crusader to the screen for the umpteenth time. Now comes the news that revered scribe Ta-Nehisi Coates is taking a crack at a new “Superman” screenplay, with DC eying a Black actor to play the lead.

While there’s a lot of fun to be had with casting ideas (Yahya Abdul-Matteen II? Trevante Rhodes? Kofi Siriboe?), this early stage of the project invites a bigger question: What purpose does a Black Superman serve? The truth is that he could not come at a better moment — but only if the character’s modern potential is served.

When Ryan Coogler brought the world of Wakanda to life in the record-breaking “Black Panther,” the character became a cultural phenomenon less for its superhero antics than for the way it examined the nuances of Black culture and explored the scope of the African diaspora. For Black people who were standing in the midst of a second Civil Rights Movement and a chaotic and toxic presidential administration, “Black Panther” quickly became both a celebration and recognition of Black resiliency. Moreover, the late Chadwick Boseman, who stood at the center of the film as King T’Challa, became a living symbol of Black excellence.

In the process, the movie shattered expectations in America and across the globe, becoming one of the highest-grossing films of all time — shutting the door on the myth that Black films can’t sell overseas amid pervasive anti-Blackness. It was a game-changer across the industry: Black films are now seen as “profitable” once again, building on potential last glimpsed in the early ‘90s days of “Boyz N the Hood,” “Bad Boys,” and “Waiting to Exhale,” while going much further. The same year “Black Panther” debuted, the success of the critically acclaimed “Spider-Man: Into the Spider-Verse,” which showcased an animated Afro-Latinx, young Miles Morales, as the web-slinger only added to the frenzy for more Black superheroes.

Then, tragedy struck: As Coogler was finalizing the script for a “Black Panther” sequel and gearing up to begin shooting, Boseman died after a battle with colon cancer that he’d kept secret for years. In December, Marvel Studios president Kevin Feige said there were no plans to recast the character, and suddenly the momentum of the “Black Panther” breakthrough hit a devastating snag.

Boseman’s death shifted production plans for “Black Panther 2.” Coogler is currently retooling his script since the late actor will not be recast. “Wakanda is a place to further explore with characters and different subcultures,” Marvel boss Kevin Feige told Deadline. “This was always and initially the primary focus of the next story. We’re not going to have a CG Chadwick, and we’re not recasting T’Challa.”

And there was another reason for concern about the future of the Black superhero: Boseman’s death came on the heels of a major fracture in the DCEU that has ousted actor Ray Fisher from his role as Cyborg. In July 2020, the 33-year-old actor who was first introduced as Cyborg in 2016’s “Batman v Superman: Dawn of Justice,” reprising his role in 2017’s “Justice League” came forward to accuse director Joss Whedon of “gross, abusive, unprofessional, and completely unacceptable” treatment of the cast and crew of “Justice League” when he took over the film for director Zack Synder.

Fisher went on to call out WarnerMedia for its handling of the investigation into Whedon and DC Films chief Walter Hamada for enabling the “Buffy the Vampire Slayer” creator. Though Fisher has been openly supported by his colleagues like Jason Momoa and Whedon’s past frequent collaborators like Charisma Carpenter, his willingness to speak out and demand accountability means that we will see one less Black superhero on the big screen. “I have received official confirmation that Warner Bros. has decided to remove me from the cast of ‘The Flash,’” Fisher said in a statement earlier this year.

Though Disney+’s “The Falcon and the Winter Soldier,” starring Anthony Mackie, is set to debut March 19, 2021, Marvel’s “Black Panther 2,” “Eternals,” and a forthcoming untitled Wakanda-set series have either been delayed or have no set release date. This means that in the MCU, the Black superhero will mostly fade into the background, at least for some time.

With Fisher out and the future of “Black Panther” still uncertain, the Black superhero’s future was plunged into crisis. In the aftermath of the Fisher situation, DC went into damage control. Though much about this new Superman vision remains to be seen, the hiring of Coates to pen the next iteration of the Man of the Steel is almost as significant as the success of “Black Panther.”

Notably, the studio’s official statement on the matter acknowledged Coates’ best-known work — not his history of writing “Black Panther” comics, but his acclaimed 2015 non-fiction book. “Ta-Nehisi Coates’s “Between the World and Me” opened a window and changed the way many of us see the world,” Toby Emmerich, Chairman of Warner Bros. Pictures Group told Shadow and Act, which broke the news. “We’re confident that his take on Superman will give fans a new and exciting way to see the Man of Steel.”

There is a lot of excitement for how Coates will deliver a Black take on Clark Kent. However, for many Black people still reeling from the loss of Boseman and having waited so long to see a glimpse of ourselves in these powerful figures, the move does seem a bit gratuitous — and Fisher hasn’t been afraid to call out Warner Bros. as a result.

With the industry in turmoil amid the pandemic and with a delayed return to Wakanda, Warner Bros. is running toward an almost-guaranteed mega-hit (assuming the partnership between the studio and Coates remains amicable). But it’s worth noting some of the barriers that Coates will have to work through to make this character click. Superman, after all, was first envisioned in a 1938 issue of “Action Comics” as a white alien, and that never changed over the decades. His Black superhero will have to reimagine the character through the prism of Blackness; unlike “Black Panther,” the hook isn’t there from the start. 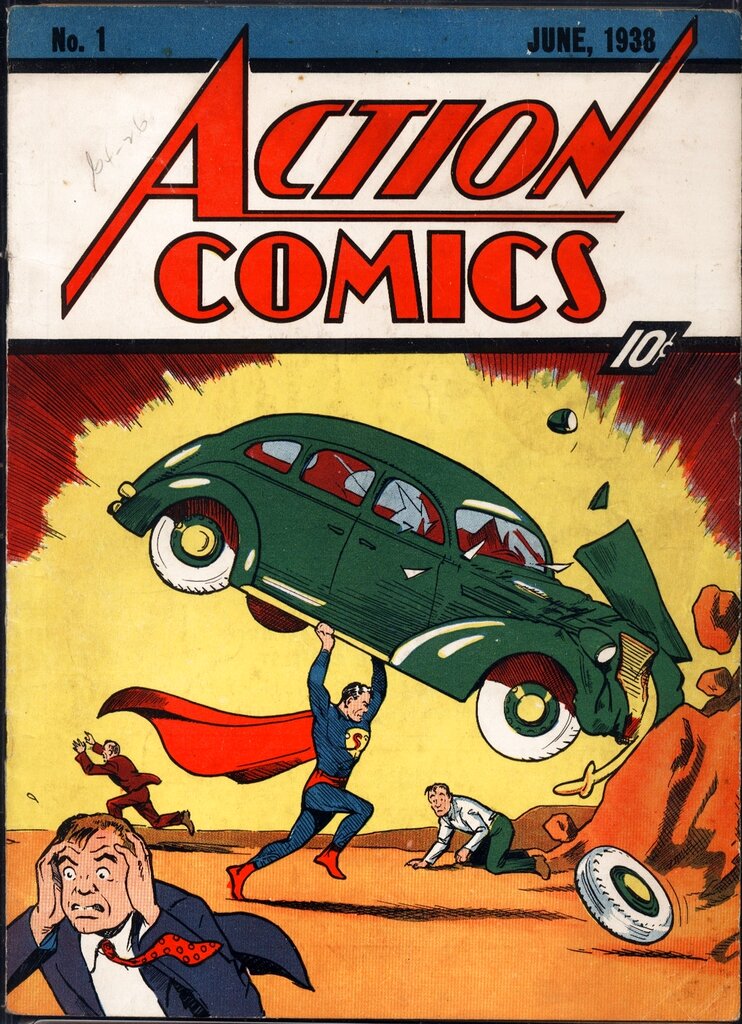 This image, released by Metropolis Collectibles in New York, shows the June 1938 cover of Action Comics. Copies of the Action comic book that launched Superman in 1938, originally costing 10 cents, are worth about $125,000 if in “fine” condition.

In doing so, Coates may want to consider previous efforts to launch Black superheroes, from Robert Townsend’s “The Meteor Man” — which took place in a Black community in inner-city D.C. — to Halle Berry’s Storm in “X-Men” and Wesley Snipes’ “Blade,” which never blatantly acknowledged the color of their characters’ skin.

Though Black people are not a monolith, for many of us, refusing to acknowledge our Blackness signals erasure. For Coogler and almost certainly with Coates, centering a Black superhero’s culture, history, and ethnicity is a signal of Black pride, not just for those who adore the genre, but for all of us who are still bombarded with Black trauma and pain in the media. More than this, the continuation of the Black superhero is an extension of Boseman’s legacy.

The best template for parsing Coates’ work isn’t so much “Between the World and Me,” an extended essay on Blackness written to his newborn son. Instead, it’s his surreal debut novel, “The Water Dancer,” which follows an enslaved man who has been gifted with a mysterious power that pushes him to escape the Antebellum south and the horrors of the peculiar institution. Coates’ biting assessments of white supremacy and race relations in this country suggest his Superman will certainly be unlike anything we’ve ever seen on the big screen before. Decades ago, Superman took on Adolph Hitler. Are anti-Blackness, racism, and misogynoir his next targets?

And, above all: Will Warner Bros. finally be brave enough to handle it? If this project does pan out, the DCEU will finally deliver a blockbuster that can at least stand with Coogler’s “Black Panther.” Still, Fisher’s story is a cautionary tale about the challenges of navigating Black representation on the blockbuster scale, and it’s safe to assume that those struggles are far from over.