Bradley Walsh will reach the milestone on Thursday and discussed his birthday plans with Holly Willoughby and Phillip Schofield on This Morning ahead of a special show dedicated to The Chase host which airs tonight. The television stalwart fought back tears as he revealed he was overwhelmed by everyone’s kind words and couldn’t believe his 60th birthday was almost upon him.

On This Morning, Holly and Phillip wore party hats and set off party poppers as they introduced Bradley.

As the ITV host popped up on screen, Phillip asked: “How are you doing?”

“I”m okay Phil, not bad actually mate, this has all come as a bit of a surprise I’ve got to say,” Bradley remarked. 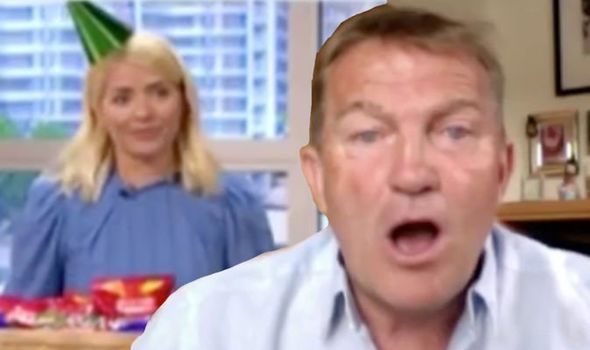 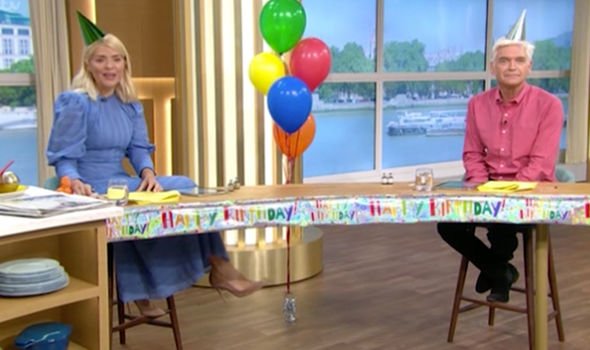 “What your birthday? You’ve had 60 years to get ready for it Brad,” Holly joked.

“I know the way it’s sort of come about, it’s only yesterday it seemed like I had my 50th birthday,” he continued.

Fighting back tears, he said: “Then all of a sudden, this thing’s happening on the telly, I feel humbled and a bit emotional actually.”

Holly then praised the TV stalwart for all of the years he’s spent in the industry. 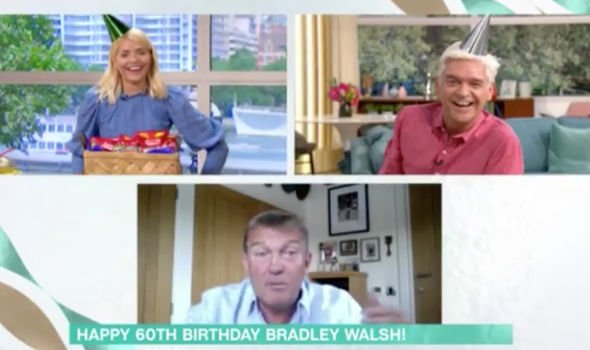 Bradley advised: “A massive piece of advice I was given early on in my career was whatever you do, the easiest part of show-business is giving up. Don’t.

Phillip asked Bradley how he’ll be celebrating the milestone but The Chase host was interrupted by a loud noise.

“Well Donna’s going to do a little tea cause we’re in lockdown you know that’s just the way it is,” Bradley said.

“I don’t mind that it will be me, Donna and Barney,” he added while a band could be heard rehearsing in the background.

“It’s the Coldstream Guards, I’ve got them coming tomorrow,” Bradley joked. “Lads, turn it in, I’m on the telly.”

“Only you can get the Coldstream Guards to walk down your road for your birthday,” Phillip remarked.

The presenting duo then revealed they had gifted Bradley a hamper full of his favourite sweet treat.

Holly said: “We did want to get you something for your birthday and I know that you are a massive fan of a certain sweet.

“You have a very sweet tooth and Bradley, look at this, these are your favourites, aren’t they, Wine Gums?”

A stunned Bradley thanked the pair before admitting he had put on a stone during lockdown.

“Next time you see me in real life, I’ve actually put a stone on, so I hope someone comes on. I’m the heaviest I’ve ever been.”

This Morning airs weekdays on ITV at 10am. Bradley Walsh: Happy 60th Birthday airs tonight on ITV at 9pm.