Home » TV and Movies » 'Breaking Bad': This Parody of Heisenberg Hoarding Toilet Paper During the Coronavirus Pandemic Is Too Good

'Breaking Bad': This Parody of Heisenberg Hoarding Toilet Paper During the Coronavirus Pandemic Is Too Good

In the throes of coronavirus COVID-19 quarantines and social distancing, everyone is looking for a little bit of humor. The outbreak is no laughing matter — but still, people are making memes to blow off steam and be happier at home.

One BreakingBad fan put together a hilariousspoof on a classic scene from the show that’s been reimagined for the current coronavirusclimate. Anyone who watched the series is sure to laugh at this weirdlyappropriate scene. 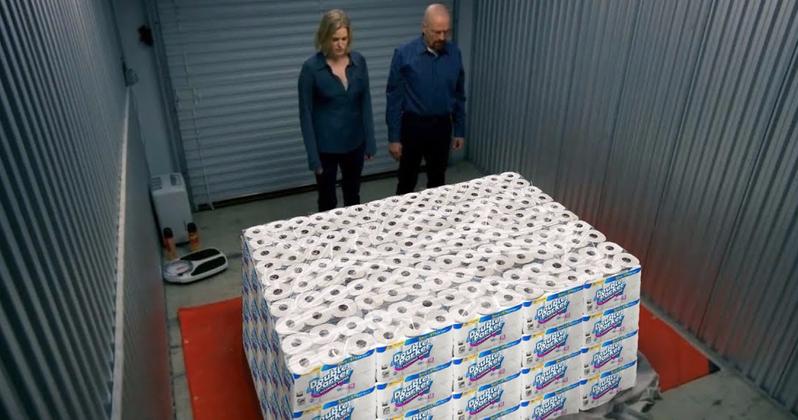 First, a recap of the classic storage unit cash scene from ‘BreakingBad’

Theshow Breaking Bad is about a high school chemistry named WalterWhite who is diagnosed with terminal lung cancer. Instead of dying quietly,Walt decides to begin manufacturing meth with a former student to raise money forhis treatments and to provide for his family after death.

However, his “ends justify the means” approach to a life of crime doesn’t go as planned. Instead of being content after earning huge amounts of money, Walt becomes obsessed with earning more and becoming more powerful in the drug trade. His obsession costs him his family and eventually, his life.

In Season 5, Episode 8, “Gliding All Over,” Walt’s wife Skyler brings him to a storage unit to show him how much cash he has. Walt’s shocked expression shows he had no idea how much he amassed.

The entire country has been feeling the effects of people hoarding toilet paper during the coronavirus pandemic. With stores sold out and jacking up prices for this necessary product, the memes are becoming ubiquitous. But none are as funny as the Breaking Bad video that juxtaposes the pile of cash with toilet paper hoarding.

In the parody, which is called “Breaking Bad Coronavirus Parody – Walter Wipe,” Skyler brings Walt to the storage facility to confront him about his hoarding. But instead of showing him a giant pile of cash, she pulls back the sheet to reveal a stack of toilet paper. Her words remain the same, making it that much more hilarious.

Skyler shows Walt his two-ply stash in the spoof video

“This is it,” Skyler says. “This is what you’ve been workingfor. I rented this place and I started bringing it here because I didn’t knowwhat else to do.”

She continues, “I gave up counting it — I had to — because itwas just so much.” These words were dramatic as Skyler stood over a mound ofillegally earned money. But standing over a pile of toilet paper? It’s a totallydifferent vibe.

The “Walter Wipe” video isn’t the only Breaking Bad clip getting the coronavirus treatment. There’s the classic photo of Huell sitting at home in his nearly empty apartment, which fans are using to encourage each other to stay home.

These aren’t easy times for anyone. But with Breaking Bad,a little creativity, and some humor, we can all laugh a little more today.