“I love a ghost story and I love the Gothic nature of a proper ghost story,” “Hill House” alum tells TheWrap 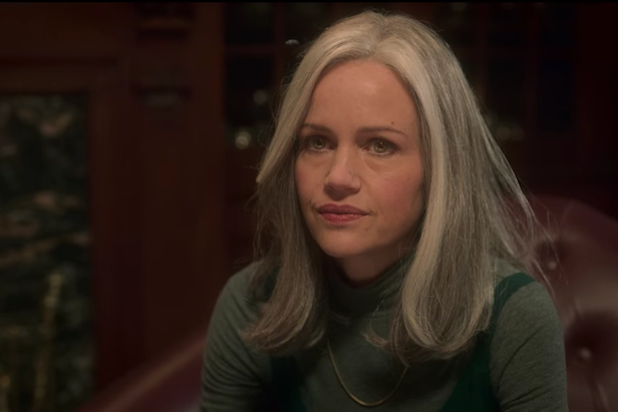 (Warning: This story contains spoilers for the finale of “The Haunting of Bly Manor.”)

There were many things that “The Haunting of Hill House” fans didn’t know going into “The Haunting of Bly Manor,” the second season of Mike Flanagan’s Netflix anthology, but perhaps the biggest shocker is one that comes almost as soon as the show begins: the surprise appearance of Carla Gugino. Not only does the “Hill House” alum show up — despite the fact her casting in the show was never revealed — but she stays until the finale credits roll, playing the pivotal part of the nameless English narrator telling us and the attendees of a wedding rehearsal dinner the story of Dani Clayton (Victoria Pedretti) and the residents of Bly Manor.

It’s not until the closing moments of the finale that we learn this very important woman’s heartbreaking identity. She’s Jamie, the Bly Manor groundskeeper who fell madly in love with Dani and lived with her until Dani could no longer bear the burden of containing the Lady in the Lake’s (Kate Siegel) soul and returned to Bly to drown herself. Jamie has come to the grownup Flora’s wedding and tells this story in front of people who lived it, some of whom remember it and some who don’t.

What Gugino loved about playing the narrator — apart from the fact her role was kept under wraps until launch — was that she “knows everything that happens” but still doesn’t know everything.

“She’s actually the one who has been able to survive this whole experience but doesn’t, in fact, know that Dani has never left her. So she’s the one who is in a position of knowing everything, and yet, at the end, what we come to realize is she doesn’t even necessarily know that Dani has never left her. And I kind of love that little moment,” Gugino said, referring to the final shot of the show, which reveals Dani’s hand resting on a sleeping Jamie’s shoulder.

Because Gugino gives you nine episodes’ worth of narration but has to hold back her character’s identity until the end so it packs a big punch, she worked closely with Amelia Eve, who plays the young-adult version of Jamie, about how to hide their deep connection.

“We spoke a lot about it,” Gugino said, explaining that they couldn’t do the accent dead-on because the audience would know that it was her. “What we ended up going with — because this character is from the North of England — was the fact you don’t see her for 10 years in between her playing the character and myself playing the character. So in that span of time, she’s presumably traveled, spent more time in London and got a little bit softened, just a little less working class. Just a slightly softened accent.”

She explained, “In that way, we can believe her as the same human being, but it’s also not because — not to get too technical about it — there are certain words if we hit them exactly the same way, you might have actually known a little bit earlier. So that was very intentional and hopefully, it sounds like it did the trick for you.”

Gugino says that Jamie’s connection to plants and nature also plays an important part in her role and why she decides to tell the story at all, especially when it’s revealed she’s at Flora’s wedding, and Flora no longer knows who she or Dani are or what happened at Bly.

“I think she’s compelled to tell this story for obvious reasons, but also because I think when you are somebody who plants things and watches them grow and then sees them die and become fertilizer, you see the natural cycle of life,” Gugino said. “So I think on some level, she is comfortable with that, and though she has suffered a great loss, she somehow wants to convey that. The fact she has lived through a tremendous amount of loss and survived it, a lot of that was about the fact that she’s kind of a loner. And all of those things, I think Amelia as Jamie laid that groundwork really well.”

Of course, Jamie takes some liberties with the story, seeing as Flora is, apparentl, actually the little girl’s middle name, but Gugino says there is truth to the ghost story.

“She is basically telling the history of Bly Manor and how it came to be. But I think in the same way that you protect the innocent, all the names have been changed and it’s basically where unless someone tried really hard, they probably couldn’t track it down to something real.”