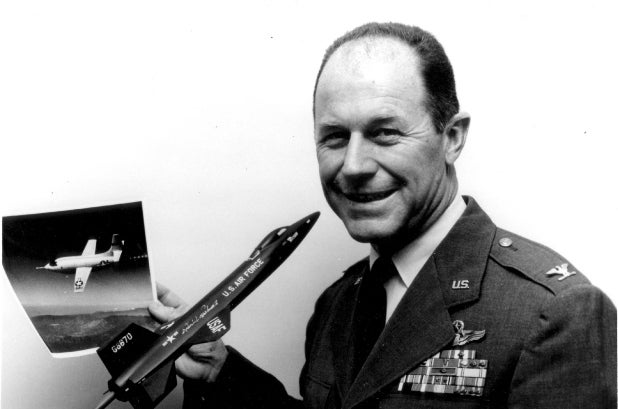 Chuck Yeager, perhaps the most well-known test pilot of all time who in 1947 became the first person ever to break the sound barrier, died Monday. He was 97.

The news was announced on Yeager’s official Twitter account via a statement from his wife, Victoria, on Monday night.

“It is w/ profound sorrow, I must tell you that my life love General Chuck Yeager passed just before 9pm ET. An incredible life well lived, America’s greatest Pilot, & a legacy of strength, adventure, & patriotism will be remembered forever,” the statement said.

Famous during his 30-year long military career for his groundbreaking work as a test pilot, Yeager became a cultural icon thanks to Tom Wolfe’s 1979 novel “The Right Stuff,” which tracks the creation and early successes and setbacks of the American space program. Wolfe consulted with Yeager while researching the book, and ultimately framed the story around Yeager’s generation of test pilots who emerged after World War II.

As depicted in the novel and its adaptations, the qualities these pilots had both in their plans and as people — the “right stuff” of the title — were as precisely what the organization that would eventually become NASA wanted in its astronauts. Unfortunately, they were mainly enlisted men who earned officer’s commissions, and subsequently were shut out of consideration when NASA declared that only college graduates would be considered.